Snapped brake caliper bolts - were they damaged before I removed them? (And why?)

Doing front rotors, pads, and wheel bearings on my Subaru recently I had all four of the 17 mm bolts that attach the caliper brackets to the 'knuckles' break off. These snapped off cleanly and felt like they were all breaking with roughly the same torque. I had removed them with a breaker bar & socket.

Looking at the sheared metal just afterwards I noticed the same pattern of rust-like coloration on a portion of the exposed surface on all the bolts. The photo below shows the bolt head; the red circled area is mainly what I'm referring to, but the green area might be more of the same.

This discoloration was visible immediately after the bolt broke; but I don't think it was "flash rust" occurring shortly afterwards, mainly because its not uniform.

I don't think there were any other contaminants that could have been introduced either to give the appearance of rust.

So what does this mean? Were these bolts failing before I even touched them? i.e., was this a crack? And if so, what might be the cause? 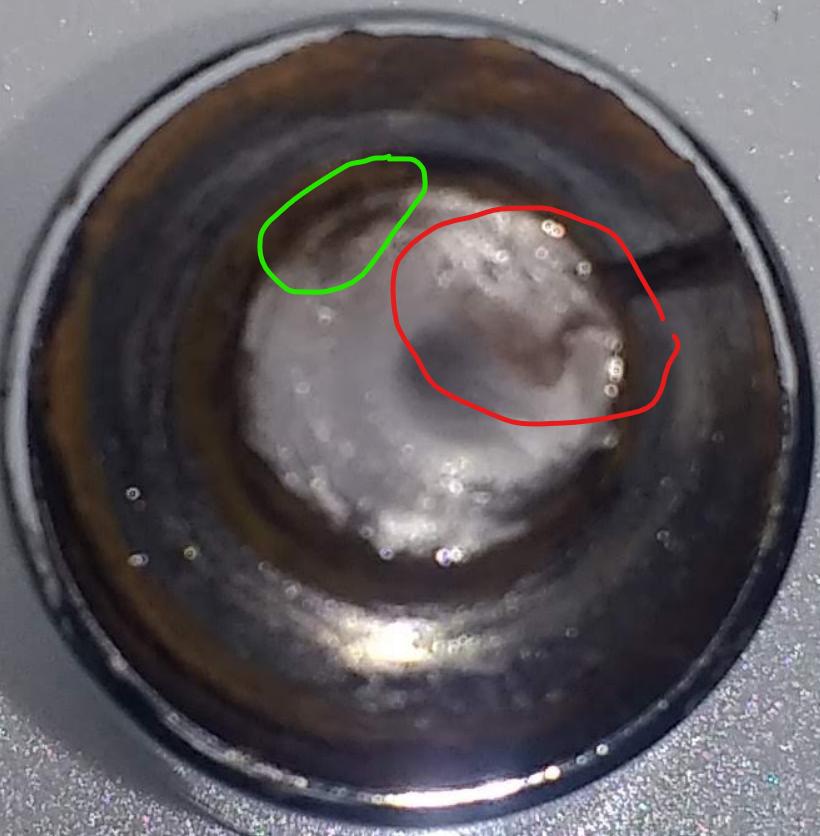 I had asked one earlier question related to this: How to remove broken bolt stubs from brake caliper bracket?

Browse other questions tagged brakes stuck-bolt or ask your own question.

5
What is a stress riser?
1
How to remove broken bolt stubs from brake caliper bracket?

4
Brakes locking up when backing up
9
Why aren't my "street performance" pads performing well on the street?
1
Why does the brake on a 2000 Sienna click and squeak?
7
2000 Chevrolet Silverado brakes dragging, 4 new rotors, 4 sets of pads, new e-brake shoes, new front calipers
0
Why would my brake pedal go halfway to the floor before the brakes engage?
0
Do I Adjust the handbrake cable before I fit and adjust new brake shoes Nissan Note 2006
0
How to avoid breaking rusty bolts?
3
Are these unmarked bolts OK for brake calipers?