What MK is my golf?

As the Mk5 was still produced up to 2010 even after the introduction of the Mk6 in 2008 or 2009 dependant on your territory, the year alone is not enough to tell. Plus the car could be either late or early registered.

To be honest, the easiest way to know is to look at it compared to reference pictures.

The styling of the bodywork and front grills are distinct enough to tell the difference between a Mk5: 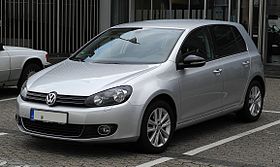 Not the answer you're looking for? Browse other questions tagged vw golf tdi or ask your own question.