Why is it sometimes hard to engage reverse gear in a manual transmission?

When shifting from any gear other than 1st (while standing still, obviously), sometimes the reverse gear doesn't fully engage and the shifter will pop back to neutral. So I have to shift to 1st gear first and then to reverse for it to fully engage.

When shifting from 1st gear to reverse, sometimes the reverse gear doesn't fully engage and I have to shift to 2nd first before shifting to reverse.

I have observed this behaviour in multiple manual transmission cars, but it's most notable in my work's Peugeot 207.

I understand the basic workings of a manual transmission, how gears are selected by attaching the gear to the output shaft using a sleeve and how each gear (except reverse) uses a synchronizer ring to synchronize the gear speed with the speed of the output shaft, but I don't understand how the general design of a manual gearbox leads to this behavior. Can someone explain this to me?

It's common for manual transmissions to not have the same gear syncronizing mechanism on reverse gear as it does on forward gears. The job of the synchronizer is not just to match the speeds of cogs that are about to mate, but to align the teeth so that they slide and interleave with each other. While reverse gears would ideally have the same alignment sync property they don't typically need the rotational speed sync mechanism because we (should/could) only shift into reverse when the vehicle is stationary

I suspect that you frequently manage to engage your reverse gears in such a way that the teeth bang into each other rather than interleaving as they should; perhaps you notice that when you "miss" reverse even though the stick looks like it's in the right "slot", it's not "fully back/forwards" compared to where it normally is. Moving to another gear causes a shift in the gear positions in the box and after this reverse is able to engage. Other actions, such as briefly raising the clutch or letting the car roll would also shift the cog positions, allowing the teeth to mate, though arguably the safest route is the one you currently take.

In terms of what's wrong, perhaps the previous owner played "if you can't find it, grind it" often with the reverse gear and has worn the teeth, that used to have meeting angled faces that assisted alignment, so that one or both now have flat spots; occasionally these flat spots collide directly, and cannot perform their function of causing cog rotation/alignment as they slide past each other:

Note that this image above makes most sense in combination with the following image:

The conical shape of the pink cog synchronizes the speeds, then it is the job of the angled faces on the two mating cogs to align the teeth. A reverse gear doesn't need the conical portion but it still needs angled teeth. Imagine what could happen some percentage of the time if the points of the angled teeth were worn flat so they engaged flat-to-flat rather than slope-to-slope: 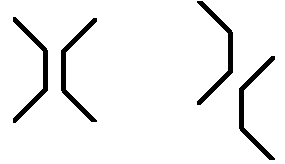 It's an exaggerated image to make the point; teeth shaped with a flat will not engage if the flats meet (left diagram) but will if the slopes meet (right diagam), giving rise to a percentage risk of collide rather than slide. If your gear teeth happen to randomly be in the right place, reverse will engage. If in the wrong place, you have to do something to jiggle the gear positions

Sometimes, a gear popping out into neutral means a serious damage inside (either bearings or the selection mechanism).

Bearings usually make noise under load (no-load noise of a gearbox is another, almost unrelated matter).

And I have a car that pops the reverse just because the stick bumps into the seat and doesn't fully engage. Moving the seat one step back from where my wife likes it solves the problem.

Not the answer you're looking for? Browse other questions tagged manual-transmission peugeot-207 or ask your own question.