How to Safely Align Lower Strut Bolt on 2001 Outback

I'm replacing the rear struts on a 2001 Subaru Outback with pre-assembled "quick" struts. I have both rear wheels up with the rear of the car supported by jackstands on either side. The front wheels are on the ground, one wheel chocked front and back and the handbrake on.

The replacement strut is currently fastened to the frame by two bolts on top with the lower end hanging in the wheelwell. The lower bolthole on the old struck was held to a bracket behind the wheel with a single pinch bolt (with a 19mm nut).

I'm now having trouble aligning these lower boltholes. The lower end of the strut is hanging just a few inches lower than the bracket (see pictures). How can I safely align these to thread the bolt through both?

My first thought was to try to compress the strut with the floor jack in the picture. I used a block of wood and started hearing cracking noises (from the wood) as the car began raising as well. On top of that, the boltholes didn't seem to be getting any closer together, the car was just being lifted. The cracking sound of the block of wood I used (chunk of 2x4) also made me realize that if I did manage to get them aligned that way it would be a risky feat to try to thread the bolt by hand with the car resting on that stressed block. If the jack is the best answer, I think I need to ditch the piece of wood. 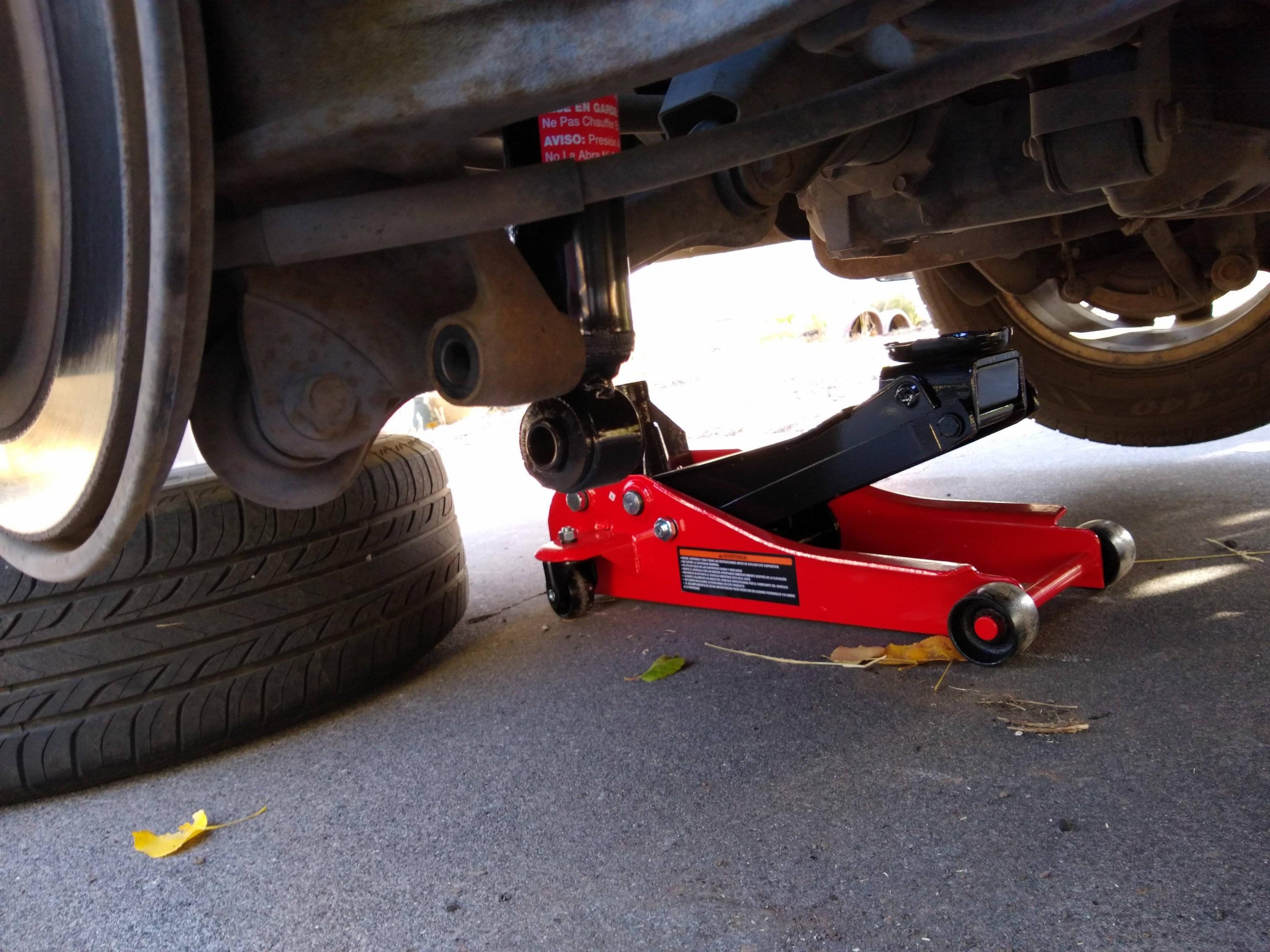 After finding a description of the process in the Subaru service manual I ended up using the vehicle's scissor jack to lower the rear arm to meet the lower bolthole on the strut. The guide advised putting the jack upside down between the link rear and sub frame. The diagram didn't help me so I took a guess and saw only one spot that made sense and it worked.

Cranking on the scissor jack didn't completely line up the boltholes on its own. I did have to mess around with the lower end of the strut assembly to get the holes aligned. What ultimately worked was loosening the nuts inside the car that hold the strut to the frame and resting the strut on the floor jack with as little pressure as possible to still be able to jerk it around and finally into place. The bolt took a couple whacks with a rubber mallet to seat completely but it did eventually go in snugly. 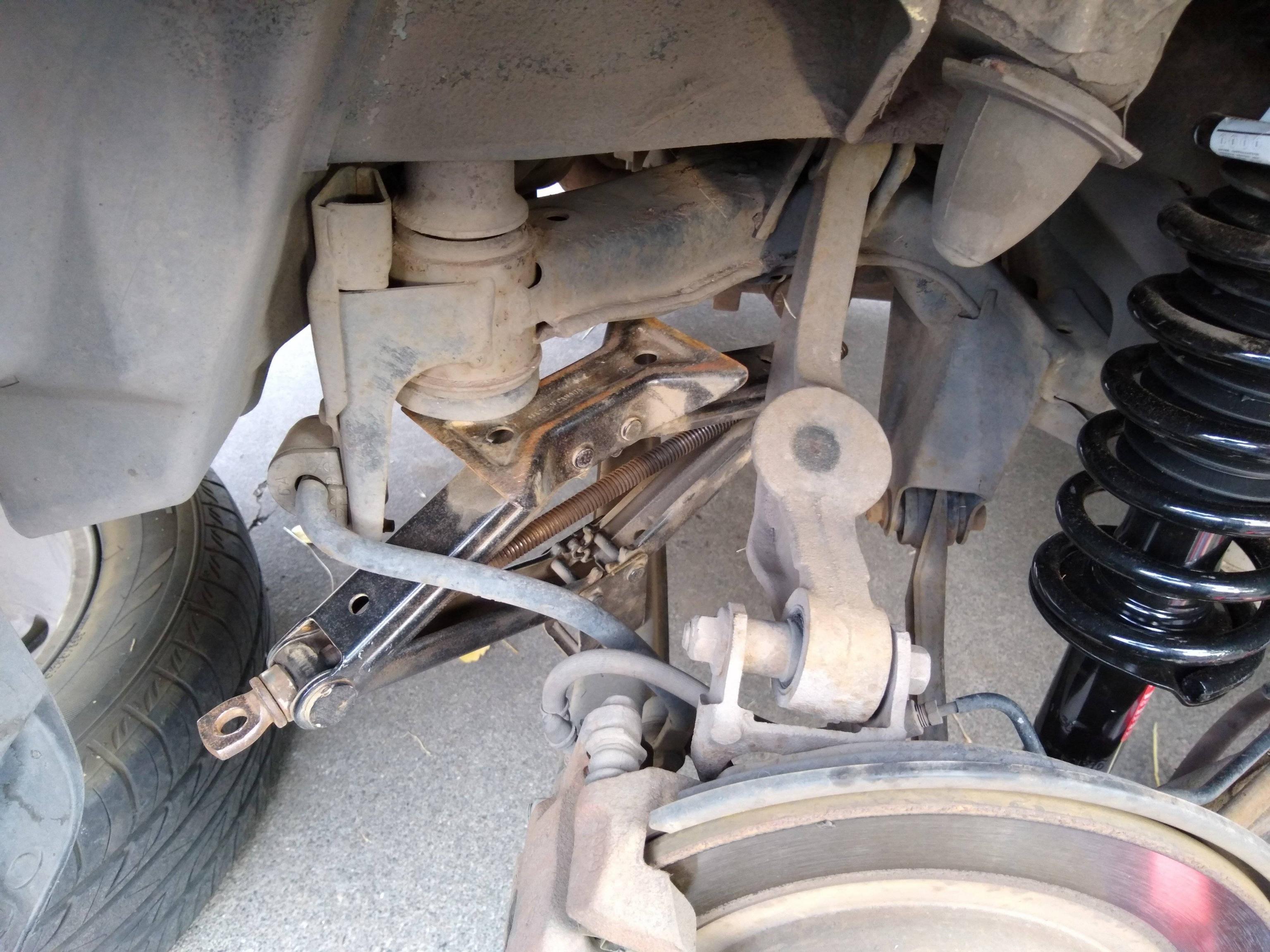 Use a floor jack on the bottom of the shock. A few bags of cement / sand in the trunk of the car stop it from rising up on the strut.

It's advisable to make some sort of V-shaped support bracket to fit into the top of the jack - you don't want that strut slipping off when compressing it.

Not the answer you're looking for? Browse other questions tagged struts outback jack bolts or ask your own question.

10
How Fast Should a Depressed Strut Piston Return?
7
How bad is this strut mount damage?
4
front struts 2000 taurus can not knock out lower mounting bolt. nut is off
3
2001 Subaru Outback - Shaking at Stop
6
Extremely over tightened pinch bolt, how to remedy?
1
Lower torque spec for a used rear strut-to-axel carrier nut versus new?
2
How to removed sunken sheared bolt