Potential issues with this car that passed by a flooded street for a couple seconds?

There was a day where it rained extremely hard like buckets of water at a time. It flooded like crazy in a matter of 10-15 minutes literally. The floods were insane and I panicked driving through light floods until the corner street of my destination--which I shouldn't have drove to because it had a few feet or water. It was deep probably around this level: 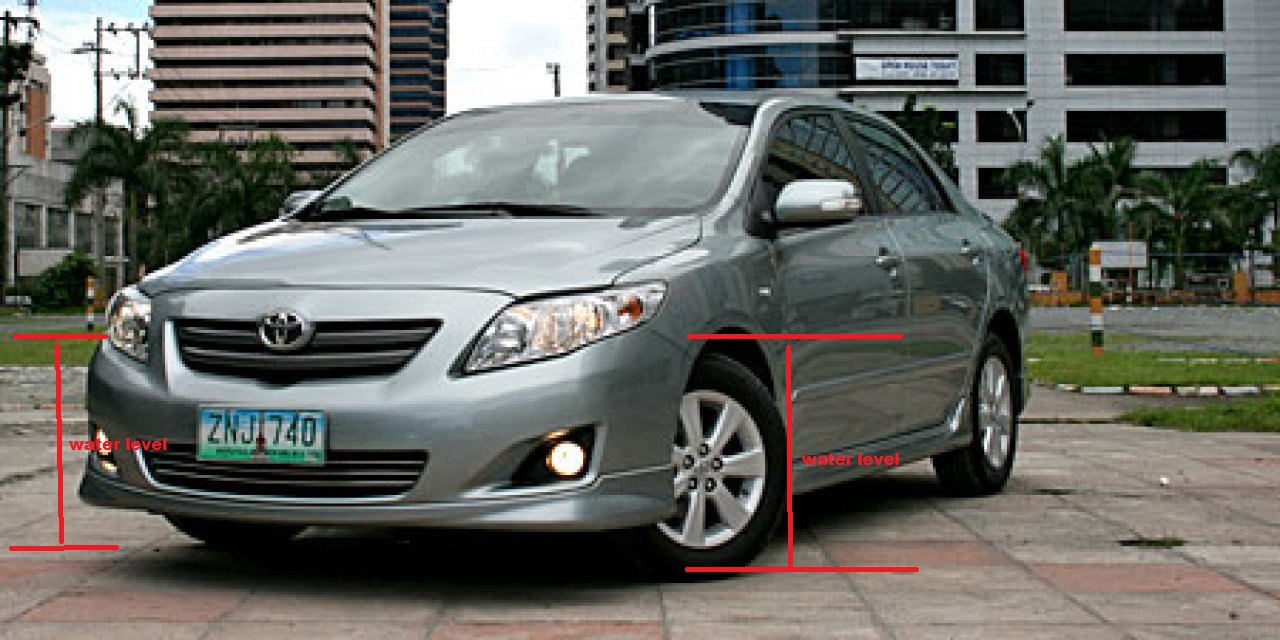 I know it was a mistake going through water this deep and I didn't realize until it was too late. The distance was only about 10 meters lasting about a couple seconds and I heard gurgling as I passed by the flooded street, but I had to keep going because in my head I just can't stop or my engine will die.

Then before entering the next street I hit a physical object that caused my front bumper going loose (near the headlights) because I had to pass by a narrow street and I couldn't see the street due to the water level and I was in a panicked state. Luckily I was able to re-attach it by hitting it in after I parked, but what I did not notice until I got home was that a plastic element below toyota logo was pushed inside the car which we later removed at home so there is a empty space in this area of the car. This is the part that was pushed inside: 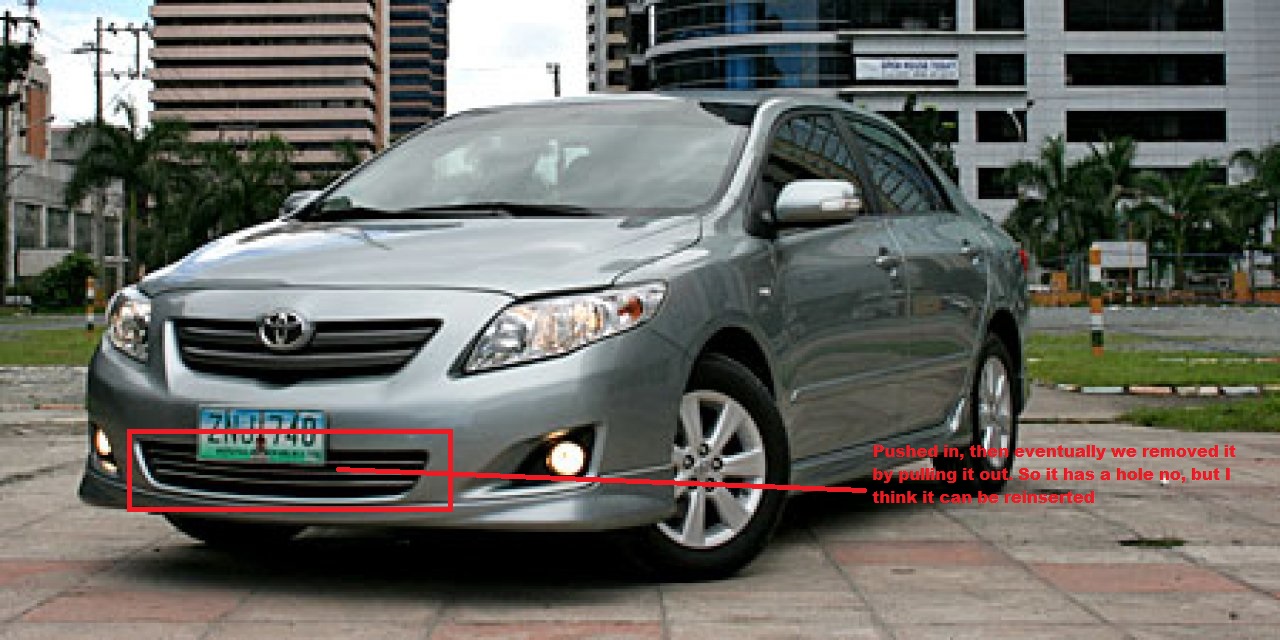 What I also noticed was that there was a kind of plastic hanging in the front side below the car. I believe it is the splash shield but I am not sure. It looks like it is flapping. I am not sure if it was because of water level or because I hit the car that caused the front bumper and the plastic below the logo to get dislodged.

Also checked the engine oil for signs of water entering the engine after being parked and the oil was not milky and there were no water that made the carpets wet or entered the car, but I still fear of car damage due to that brief moment since the water level was indeed deep and it was a first time I ever had to encounter that and it was a mistake to go through it.

I am not sure also if my car air conditioning had a slight problem with cooling also, but when I was on the way home from the flood experience, I believe it was functioning, but the aircon was not cooling as much despite lowering the temperature. I also could have smelled some musky smell like moisture, but it could have just been my imagination. But it started cooling about 40-50 minutes later (if I remember correctly) and has been working properly since then. I don't believe there are any moldy smell or musky smells

I am not experienced enough to know which caused the damages seen in the car and what the best choice of action should be. Currently, we are not able to take it to a repair shop due to the COVID-19 situation but we have been using it to go to nearby places with no issues at all. But safety is am important thing, so I just want to make sure what we are the critical aspects of the car that we should fix.

My primary concern would be electronics, if they seem to be working, that is a good sign. Things like the speed sensors on the wheels to manage traction and brake control . And tire pressure. Maybe try hard braking on an empty road to see what happens. There are so many possibilities I think I would just drive it and try to be aware of any unusual responses. Two considerations ; over time electrical connectors that got wet may corrode and cause faults . And if it was salt or brackish water, all the electrical/corrosion possibilities will be worse.

You haven't hydrolocked your engine, which is good. I'd go as far as changing engine oil immediately, transmission (and, if it is separate module, also the differential oil). I'd also check if the radiators are damaged - specifically, if lots of ribs are bent, which will prevent it from cooling off properly. Everything else should be fine for the time being.

Not the answer you're looking for? Browse other questions tagged engine maintenance repair or ask your own question.

5
Drove through high water, what to do now?

3
changing brake response
3
"Irreparable" tire damage incurred due to road pothole
3
Car won't start problem
4
Engine misfires when car hasn't been driven for a couple of days
3
The effect of hitting deep water hard
1
VW Polo strange issue of overheating
24
How do cars drive through deep water as shown on many videos online?
5
Will driving car without coolant cap do long term damage to car?
2
Car stalls in flood but now starts, does that mean the engine is okay?