I have stripped the threading on this bolt and would like to clean and re-tap the bolt hole. 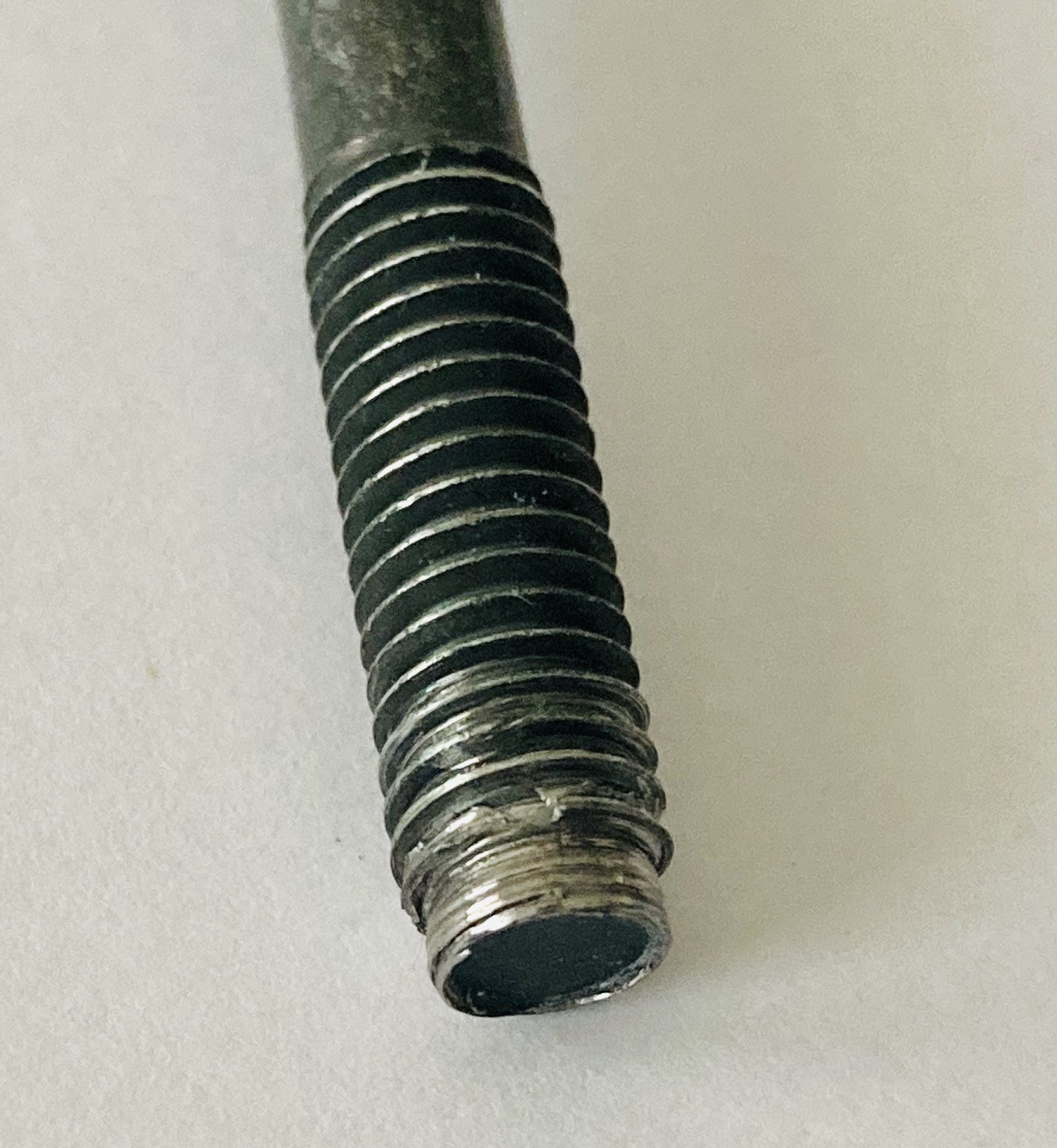 I have read that I can use a file or hacksaw to cut some grooves into it like so. 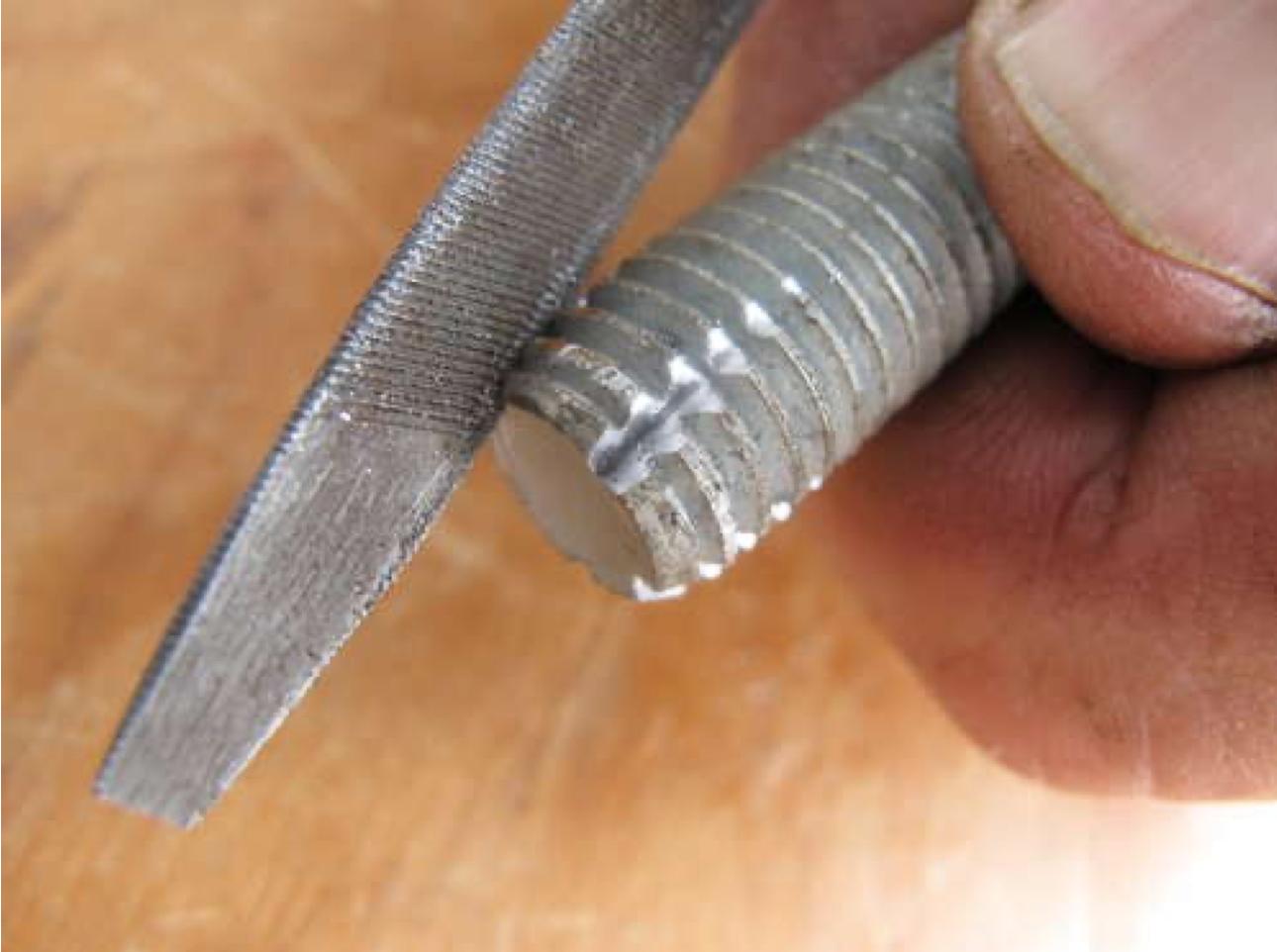 I assume I must first grind down the broken threads and then cut those grooves, but I'm not sure how many grooves or how deeply they should be cut.

I'm also unsure how the tapping process will feel. Will I need to really force it? What should I expect. Should I clean the bolt hole first? Lubricant?

This question is paired with another titled "Courses of action after having started to strip the threading on a bolt".

To make what you are describing, first grind down the tip of the bolt you are going to use so it is completely flat and goes up into the threads. This ensures the threads are at the tip of what is left and that there is no taper there. This will allow you to get to the bottom of the hole (if this is a through hole, you don't really need to grind the tip and might work better with the tip on it). Next, when grinding the flutes, you'll want several on there. Your flutes should be wide enough so you have equal amounts of flute to what's left of the bolt threads. Four would probably be good, but three (or even two) would work if the bolt is too thin for more flutes. Make sure these go up the bolt quite a ways. You want to make sure there is plenty of meat left at the center of the bolt so as to support itself. Last thing you want is for it to crank around itself and get stuck in the hole. The flutes are there to pick up any ash/trash, not to cut new threads. When you run it down the hole, it will be slightly precarious, so you have to be careful you don't cross thread it.

While a tap would work for this operation, you really run the risk of cutting new threads with it if you don't do it right. A bolt cut with flutes should be quite a bit softer, but be hard enough to straighten out threads and remove ash/trash without too much of a hassle. If you've not used a tap before, I believe using this would most likely be a better (read: safer) solution.

Good start , if the bolt is surprisingly hard and hole material is unusually soft , it could work. A normal tap is hard (Rockwell 60 to 65) : If your bolt is high strength ( such as Grade 8) it is about R c 30 , if it is a regular hardware store bolt ,it is about R c 20. So ,chances are it will not work. You might get lucky and it will clean some relatively loose metal debris out of the hole. A tap must be hard to cut metal ( steel). If you want to experiment : 1, heat the bolt to red/orange ( 1500 to 1600 F) . 2. Plunge into cold salt water ( quench). Heat for as short a time as possible because the bolt will be loosing carbon. I wouldn't bother trying to temper . Try and see if it cuts. It will be difficult to get plain carbon steel hard enough to cut. That is why high strength bolts are low alloy like chrome moly.

Not the answer you're looking for? Browse other questions tagged stuck-bolt stripped-thread tap or ask your own question.

8
Can bolts become fused with an exhaust manifold? If so is it possible to remove them?
2
What are the options for repairing threaded bolt hole without drilling
1
Recovery from stripped starter threads in engine block
1
Second hand camshaft from another bike - is it safe?
1
Stripped threads on air relief plug