What caused my manual transmission to rev while shifting gears and now won't go at all?

I have a 2008 Mazda 3i Touring (2.0L engine) with a manual transmission, ~130k miles on it. For a few weeks, whenever I shifted gears the engine would rev (up to 3000-4000 rpm) for a second or two before the gear "engaged" and produced power as usual - almost as if the clutch was still in a bit even though it wasn't. This happened in all gears, but was more noticeable in the lower gears (especially getting going in first and shifting to second). I recall it happened both while upshifting and downshifting, but I'm not 100% on that.

Tonight, while my wife was driving the car, she called and said the car stopped putting power to the wheels entirely and the car coasted to a stop. The engine was still running, and she could rev it while in neutral, but it wouldn't go. We're having it towed to the house to diagnose it more in the morning.

I've taken reasonably good care of the car, though it's only been driven about 1 day a week for the last 6 months (total distances each time of ~15 miles or less).

What are the likely reasons for this and how difficult is a repair?

It sounds like the clutch friction disk material is gone. Your description of it revving to 3000-4000 rpm before finally engaging is typical of clutch slip, which means the clutch was on the way out at that point. More than likely the clutch lining on the friction disk is completely gone at this point, which means there's nothing between the engine and the transmission to allow power to pass through.

To give you an idea, I did a clutch on a Ford Escape, which is the same as a Mazda Tribute. Here is an image of the clutch disk sitting side by side to a new replacement: 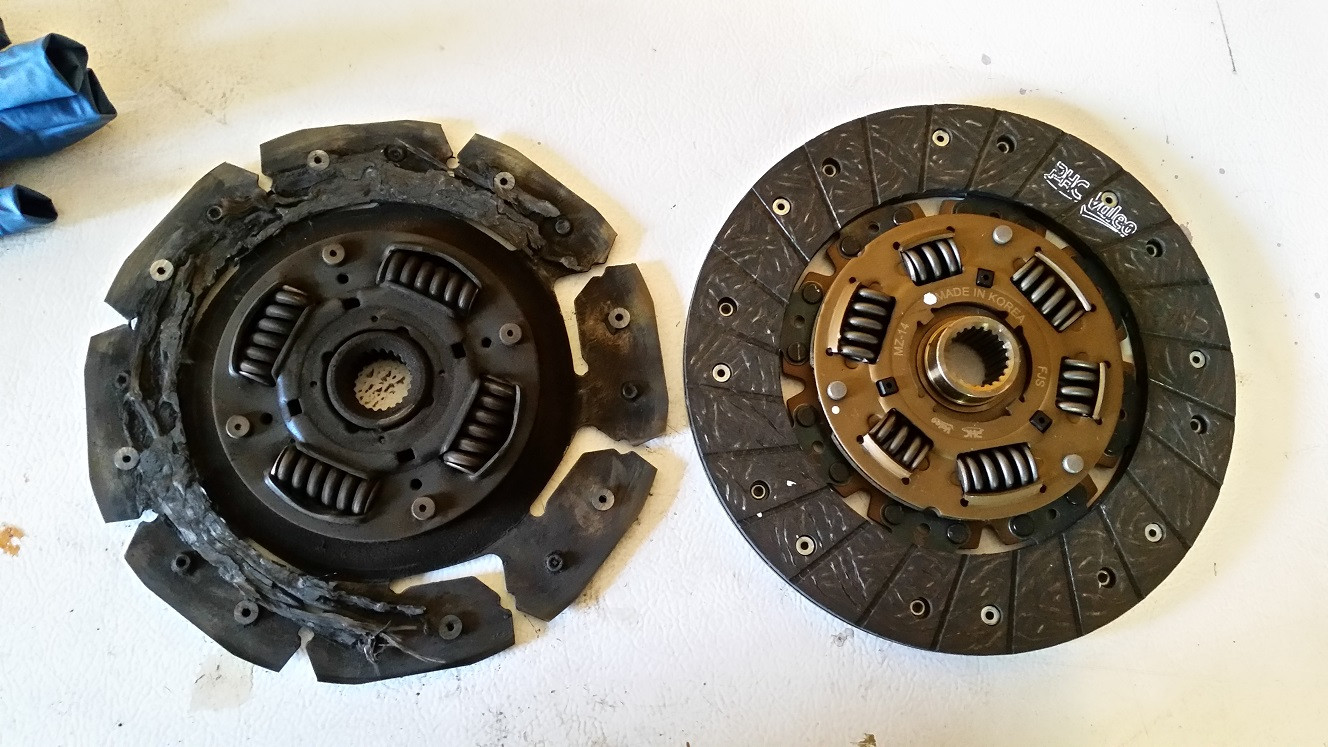 All of the friction material had come off of the old friction disk and was inside the bellhousing of the transmission. It was quite a mess to clean up. What you describe as far as "no power to the wheels" was exactly what was happening here.

As far as ease of replacement, most likely the engine/transmission has to come out of the vehicle, split the two, change everything out, remate them together, then put it back in the car. It's a lot of work, which involves a lot of knowhow. If you're not familiar with this type of work, I'd highly suggest you leave it in the hands of a professional.

Not the answer you're looking for? Browse other questions tagged clutch manual-transmission shifting mazda-3 or ask your own question.