So I'm trying to adjust a soviet K-22G carburetor which was placed long time ago in a Chevrolet 235 6L engine. It "works" but I don't seem to find the right spot to make it run as it should. I have done this, which I read in the carburetor manual although an automatic translation from russian to english; some sentences are ambiguous:

Unscrew the throttle "trigger" stop screw, then screw it until "barely moving the trigger". This felt like adjusting the trigger of my spray gun.

Screw the idle screw (#2 in the fig) all the way down, then release 2 to 2 1/2 turns. The engine runs faster, then unscrew the throttle trigger until idles.

Problem #1: it "galloped", i.e, runs-relax-runs-relax, very rythmically, like wanting to stall but it doesn't. The fumes are not black at this point.

Then tried to adjust the gas using screw 23:

When having it 2 1/4 turns, it smokes black if rev'ed up, if unscrew it further to 3 1/4 it smokes more and if I unscrew about 6 turns out, it would sound like sucking too much air and stalls. 4 turns out seems to avoid stall but in any combination of turns I tried I still have black smoke and obviously the plugs get black.

So...how the hell I calibrate this carb? And as a related little question, just curious...this is a soviet craft but, it is based in a solex? or holley or webber? which design it "resembles"? 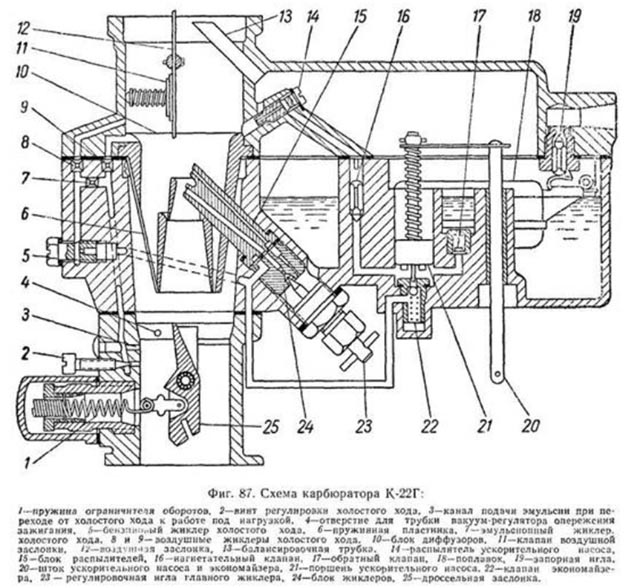 "The mouth of the main nozzle atomizer is located in a small diffuser. Gasoline is supplied to it through the main jet, the cross-section of which is regulated by a special needle 23. The amount of gasoline flowing through the main jet per unit time at a certain position of the needle depends on the air flow rate through the diffuser, ie, on the engine speed and load."

...and the manual says this about fiddling with this screw:

Note. Stop wrapping the needle when there is a noticeable drop in speed crankshaft (with a decrease in the speedometer readings by 5-8 km / h), which often accompanied by the appearance of interruptions in engine operation.

Browse other questions tagged carburetor idle smoke or ask your own question.