Can one slightly charge a dead car battery with a portable battery jump kit?

The other week, my friend was trying to jump start a friend's very dead car battery with one of the portable power bank car jump starter kits. It looked something like the below: 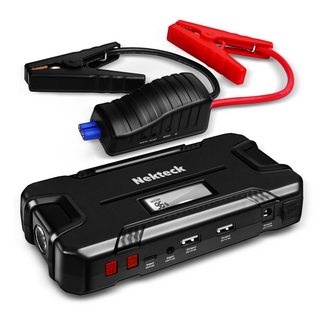 I am wondering, can one "charge" a dead battery by leaving one of these portable jump kits connected for like 10 minutes?

Or are these jump kits meant solely to provide a enough juice just for a jump.

As Miracle Max would say, there's two kinds of dead batteries, and there's a big difference between them.

This is the most common kind of dead battery. Let's say your battery is rated for 300 cold cranking amps. After several years of use, it degrades until it reaches, say, 250 amps. Your battery isn't out of power, it just can't get your engine over the hump of cranking amps. Incidentally, in this scenario, "letting the battery charge" won't help because the battery is no longer capable of holding sufficient charge.

Jumping in this scenario works by borrowing the remaining amps from an external source. This is why even a small car can often jump a large pickup. You can even buy battery chargers that can plug into a wall and will give you that boost as well (both batteries and wall chargers do this via a capacitor). These smaller jumping batteries are designed to give you surge in cranking amps for a single moment to give you that extra push. Depending on the device, that could be as little as 100 amps or as many as 2000.

An "all dead" battery is really a good battery that is mostly or fully depleted (i.e. you ran your car radio with the engine off for a long time or your alternator died). This is a less common problem, but it still happens. A pure surge battery isn't designed help you directly with this problem because it's generally designed to offer a one-time boost. Your lead-acid car battery really wouldn't like getting 500 amps all at once.

Lead acid batteries like a slow, steady charge. Most wall-powered chargers run 15-30A in charging mode and you'll need to charge it for some time (meaning several hours) to get it back up to full.

The reason people are taught to "let the car charge a bit" first in jumping is that you need the dead battery to provide some power in the attempt to crank. Since you're probably not carrying a battery tester with you, there's no way to know why the battery is bad, and there's no harm in letting a "mostly dead" battery charge for a minute.

If you're using a battery pack, just hook and crank. If the battery is all dead, the alternator will recharge it naturally. If the battery is mostly dead, it will provide the missing amps. Go take it to a car parts place and they can test it for free and tell you if you need a new battery.

Those types of chargers are designed to provide short bursts of power to start a car, most do not have a battery charging mode. Once the car is started the alternator will complete charging the battery. Some of these chargers have a USB output for charging phones, but they don't have the capacity to charge a car battery back to full.

There are a relatively few (more like very few) jump starters which directly start the vehicle with little or no involvement from the vehicle battery. Most jump chargers which advertise large starting current capabilities are marketing hype with about no relationship to reality.

The majority of jump chargers transfer charge at a relatively low rate into the low impedance but "empty" main battery which then transfers the charge out again in a starting surge at much higher current in a short period of time. This is similar to Machavity's "All Dead" scenario, but applies to a variable extent to any battery which you can jump start within minutes with a jump-start unit.

I have jump started an "all dead" battery using 2 x 6V, 3Ah (= wimpy & small) lead acid batteries in series plus very thing "bell-wire". The vehicle battery was in fact in a fairly solid state but was still able to accept and then pass on the charge. It took several minutes to trickle enough charge into the battery and then a very short time to start the vehicle (fortunately).

What would I know?
It varies :-) - but here are some other of my other stack exchange answers re lead acid charging, some of which will have relevance.

I am going to be in the minority here, but I have had success jump-starting my SUV with a larger version of what you are showing only after letting it sit connected to the battery for 10+ minutes

My car has a power drain issue that no one has been able to figure out in 7+ years. So I've needed to jump start my car frequently, so i bought a larger version of what you are showing. And when I connect it to my car and try to start it, it almost inevitably fails to start my car. But if I connect it and walk away for 10 to 15 minutes, when I come back, there is enough juice to start my car.

So in my experience, these types of devices will charge your battery a little.

There is a reason why a car battery is big and heavy, and the portable kits are not - they have not nearly enough power to charge a battery.

But there is no need or use to charge a dead battery before starting the car - just jump-start the car, and once it is running, its alternater will load the battery just fine.

It is a good idea to run the car for 15-30 minutes at least, depending on how dead the battery was, or you might need another jump start (so don't just drive to the mailbox and shut the engine off...)

I learned long ago to not charge the battery but go directly for the engine (one contact to the postive pole and the negative to the enginge block to avoid damage from small flashes. not sure this is at all a good idea or even possible today, maybe someone with knowledge can evaluate?

It's a bad idea to let those kits charge batteries in advance. Either the problem is that the battery does no longer hold enough charge to jump start the car in which case the kit will not help. Or the battery is good but in a state of significant discharge. The jump start kit will not be able to make much of a dent in the state of discharge and it will detract from its own ability to jump start the car. But you will likely make the situation worse since a fully discharged lead battery tends to have a comparatively high inner resistance and it takes some initial charging to break that down and get it to charge well. If you get the battery to that stage before starting the car, it will suck up most current that the jump start kit can deliver when you try starting the car.

So there is some point to getting the car started before the lead battery wakes up and clamors for all the current it can get. If the motor is already running, the alternator will provide that current. Otherwise the starting kit has to do that.

Not the answer you're looking for? Browse other questions tagged battery jump-start battery-charger or ask your own question.

14
Using a car with an inaccessible negative battery terminal to jump start
5
Start a dead battery car with a power/USB charger
2
What battery specifications should I look at when choosing a portable jump starter?
2
Jump-starting high-amperage diesel engine with a car with a smaller battery
1
Jumping a car and attaching cables after starting donor car's engine
0
Can you charge a car/motorcycle battery with a portable power generator?
0
Can a dead battery be charged by directly connecting jump start leads to it?
0
Portable Jump box won 't hold charge