Can warm weather and sun (25 degrees celsius or 77 degrees fahrenheit) cause cracks like these? 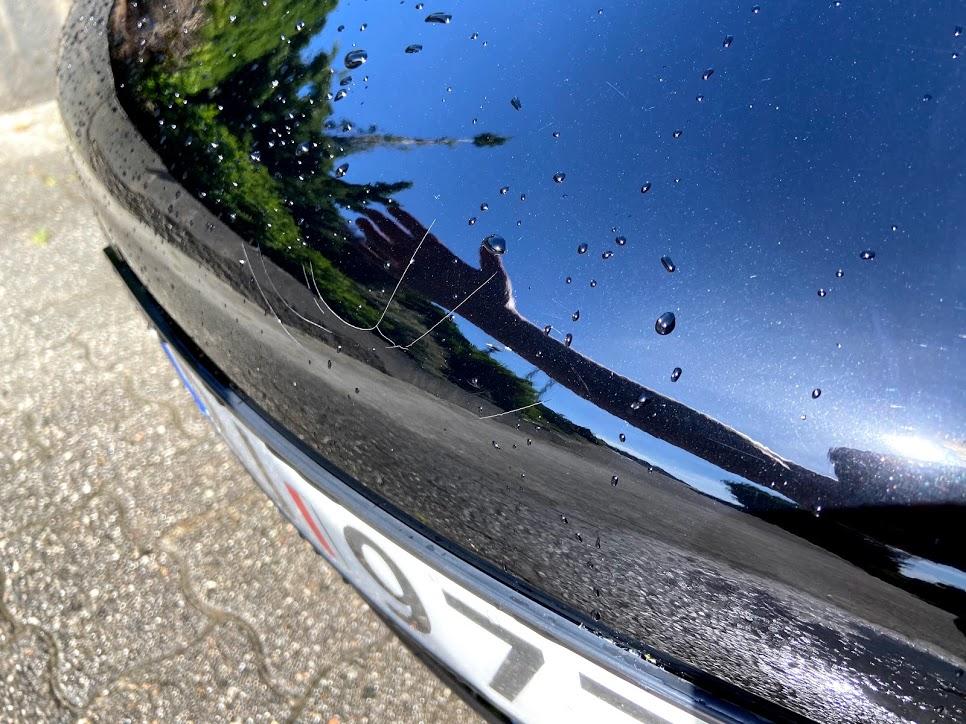 More detailed backstory. I sent my car to a company for 3 layer polish. Got it back, left it in a garage for half a week until I sent it to a local workshop to replace a part that eventually never arrived. I got it back 5 days later, then noticing these cracks in the paint.

The workshop claims that due to no clear large physical damage, it cracked due to simply hot weather. Only by coincidence while staying (outside) with the workshop. Also a comment that it probably was a bad paint job, probably using a primer not meant for plastic (the hood is made of plastic).

Is my workshops explanation probable?

Looks very much like cracks in underlying body plaster or fiberglas. Or, being plastic, the wrong paint was used and cracked when the plastic was flexed at that spot. That looks like a location on the body likely to get damage with a very minor bump. Unfortunately I my be the only person to have had weather related paint cracks .The circumstances were very unusual. Long ago I painted a car black with lacquer ( in the 1960's), I put on many layers to do a good job. Lacquer is dry to the touch in minutes , but takes weeks for complex polymerization. A few days later I drove to Houston ( June) where it was parked in the sun. A week later I noticed fine craze cracking on most of the car , nothing like your cracks.

Difficult to be sure from the photo - but to me they look more like scratches then cracks. There's no spidering, no clear lines of travel, and no evidence of deformation on the clear coat around them.

In any event the notion paintwork cracking under that sort of temperature is unlikely to say the least - it really isn't a particularly extreme amount of heat and that casing such well defined cracks in what is really quite a localised area stretches credibility passed breaking point.

Also a comment that it probably was a bad paint job, probably using a primer not meant for plastic (the hood is made of plastic).

Bullsh#t - if you'll excuse my language, if it was a a dodgy paint job such as they describe it would have shown itself well before now. And in any event wrong-primer scenarios would generally result in the paint peeling, in swathes, not sharp-lined cracks.

PS: Commiserations by the way, looking at the reflections in the non-affected body work that paint looked in really good condition :(

Not the answer you're looking for? Browse other questions tagged paint weather-dependent or ask your own question.

4
What effects can paint peeling away have?
5
Do machine car washes destroy a paint job?
8
Why would I paint my car engine?
8
How can I fix the paint in my car?
5
How can I remove paint off my truck?
1
Car touch-up paint… HELP!
3
Is it safe to paint my own car?
1
Paint cracked lines
2
Does a cracked paint blister corrode faster than if grinded?