I just bought a 1998 Jeep Wrangler today. When I took it for a test drive yesterday, everything seemed to work fine, but when I was driving it home today some electrical issues came up.

The first electrical issue was the turn signals and headlights not working properly. When I first started the car, started driving and turned on the turn signal, it didn't flash the dashboard lights or make any sound (either left or right). Also, it didn't illuminate the turn signal, but it did turn off the brake light on the side that was supposed to have the signal. Further, the high beams would turn on but the low beams wouldn't. I then stopped for gas a short distance down the road, and when I turned the car back on after getting gas, the headlights were the same but all aspects of the turn signals started working as they were supposed to. Before stopping for gas and restarting the car the airbag light on the dashboard was also on, and went away after restarting.

Once I restarted the car and started driving again, the headlight issue stayed the same (I'm not entirely sure the bulbs aren't burned out, but it also didn't illuminate any indication on the dash board, which it does when the high beams are on), but the turn signal issue didn't come back, neither did the airbag light. However a new problem occurred where every approximately 2 stops, the "check gauges" light would come on, but would disappear shortly after I started moving again. When this happened all the gauges were fine, reading what they're supposed to, so I think the light was turned on by some error.

I know that there could be several causes of these issues, and nobody can give me a definitive answer, but I'd like to hear some ideas from the professionals on what to check out. I'm not a mechanic but based off of my previous repair experience, I assume it's one of the following: Bad ground connection, bad ignition switch, bad turn signal / light switch assembly, or (hopefully not) bad computer. I should also add that the car has no issues starting, and starts fine every time I've tried. Also, the person I bought it from says that the battery was replaced very recently. If you have any ideas of what could be causing this issue or any recommendations of what I should check first, please let me know.

I found what I believe is the service manual for this car here - https://wranglertjforum.com/threads/jeep-wrangler-tj-factory-service-manuals-fsm-technical-documentation.4618/

The lighting wiring seems fairly simple with no electronics involved.

I seems a coincident that the turn signal and headlight fuses are next to each other on the wiring diagram (see below) and in the fuse box. I would check there first for bad connections.

After that, check the turn signal switch and the headlight switch with a multimeter. You should be able to follow those diagrams easily enough. Come back with any questions. 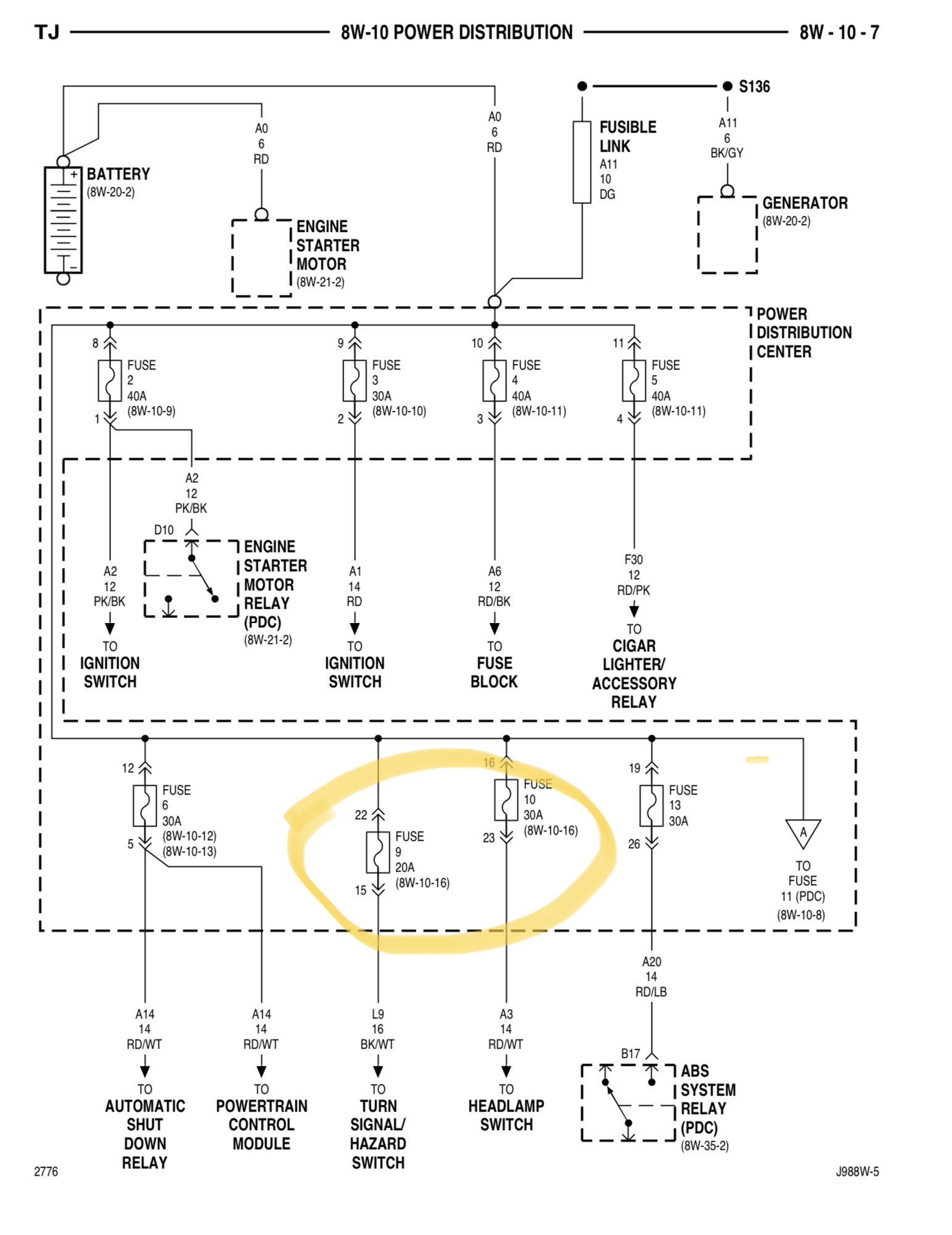