How can a damaged caliper prevent other calipers from fully pressurizing?

I've got a 2013 CR-V. During a recent service, I asked a tech to take a look at what might be causing a weird smell to come from one of the rear wheels. During the initial look, he noticed that there was a lot of heat coming from that same wheel as well, and after inspection, recommended new pads and rotors for the rear. I do brakes at home because of the cost, but I did get a brake fluid flush done there.

When I started replacing the pads and rotors, I saw that the wheels that didn't smell (both fronts and one rear) all had pretty evenly worn down to 8-9 mm, while the other rear wheel (the one with the smell) had both pads between 4-5 mm. For each pair, the wear was fairly equal for both pads, and that wear was even top to bottom as well. 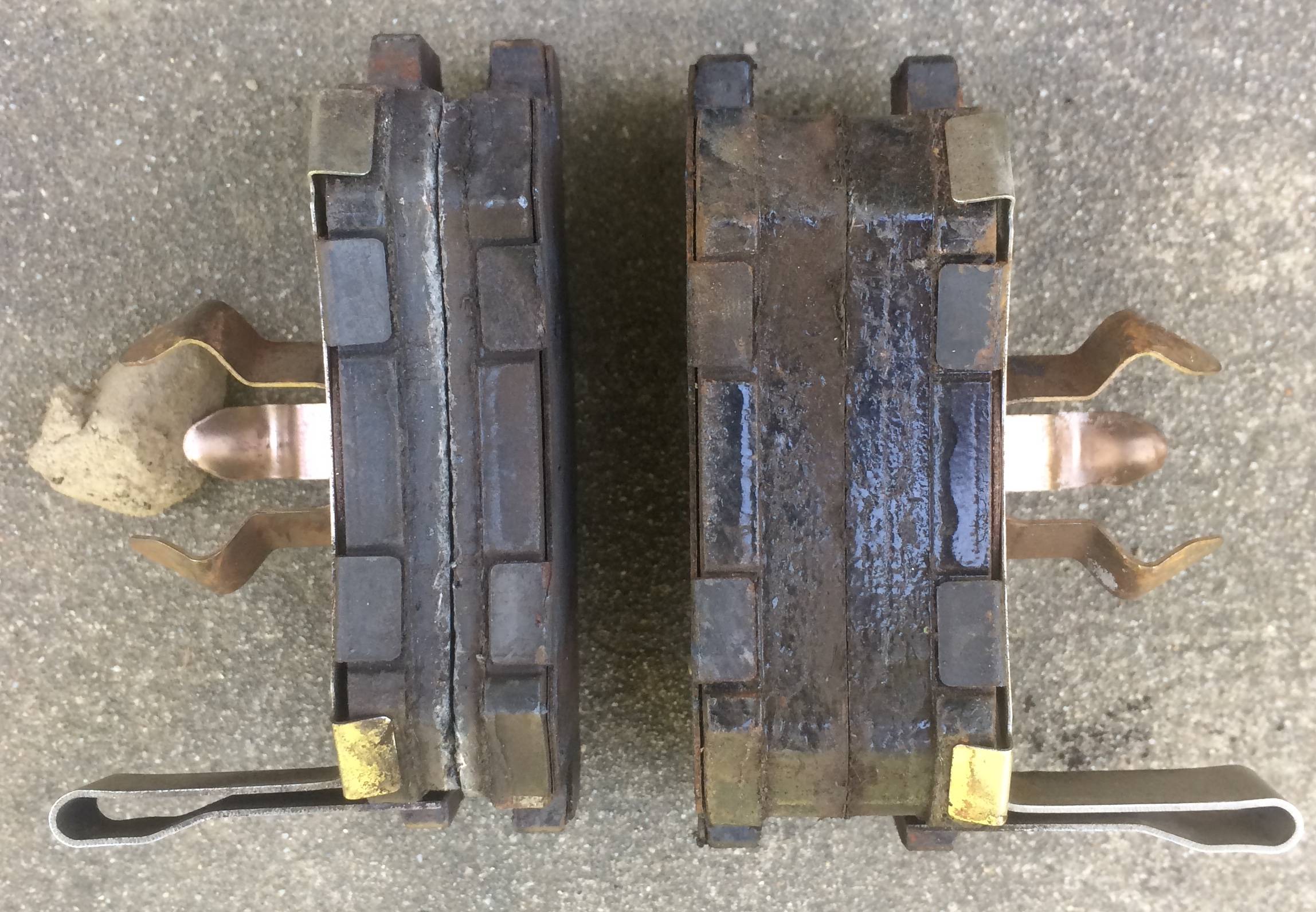 The rear rotor that didn't smell still had some of the grinding scores still visible on the inside (top right of image). All pads and rotors were new as of June 2019.

I put the new pads and rotors on, and went for a 15 minute drive. Immediately after, I checked the temperature of each rotor. The rotor that smelled didn't smell any more, but it's temperature was around 340F. The other rotors were all between 80 and 90F. So more work to do.

My limited experience with brakes told me that the next logical place to look was the calipers. But which one/ones? Here's what I was thinking:

So I was initially thinking that at least both rear calipers were probably damaged, though in different ways. The caliper across the severely worn pads probably had a seal failure, meaning it's piston wouldn't retract after the brake pedal was released; and the caliper across the hardly worn pads was probably corroded in the cylinder to the point of seizure so that it was never able to significantly engage the pads against the rotors. (Note: since the service tech didn't mention the front brakes, I wasn't thinking about them too much at this point, but as I write this up, I'm not sure why I wasn't applying the same logic to the fronts, based on the equal pad wear with the lesser-worn rear pads.)

In the end, I decided to first replace the caliper across the severely worn pads. I did that, bled the brake line, and went for the same drive again. This time, all four rotors were around 120F. I'm calling that mission accomplished as the even temperatures seem to suggest even pressure across all four calipers.

But, and this is the point of this post, I don't understand why I don't now need to replace the other caliper(s). It seems like the other sets of pads and rotors were barely used at all in those 11 months. Is it possible that a single rear brake has been doing the lion's share of slowing the vehicle down for 11 months? (Note: we haven't noticed pulling to either side when braking.) Or is it more likely that all the brakes have been working equally when the pedal is applied, but the one set of pads just hasn't been able to meaningfully disengage from their rotor for 11 months?

Your final thought is correct. Only 1 calliper was faulty.

You said it that the pads on the faulty calliper had even wear, which indicates that the slider mechanism was not seized.

The piston on the faulty calliper was clearly seizing out and not freeing the pads when the brake was released. If this had been on the front wheels you would likely have felt some pulling to one side.

This friction while driving will have caused the increased heat and smell from that wheel.

If you were to dismantle the faulty calliper you will likely find corrosion on the piston or corrosion behind one of the seals which is pushing the seal harder against the piston.

To answer your main question, the good callipers will have all been pressurising correctly and working correctly. It was just the faulty calliper that was staying on when it should have released. It should have been obvious to the mechanic.

I agree with the accepted answer by @HandyHowie, but here is a heads-up: watch that new caliper, and check its temperature against the others in a few days and again in a few weeks. Here's why: sometimes a caliper just seems to be defective when the real culprit is the brake hose serving that caliper. The internal lining of the brake hose can collapse and act like a one-way valve, retaining hydraulic pressure in the caliper and causing a dragging brake and premature wear. (This has happened to me.) When you replaced the caliper, the brake hose was moved out of its normal position and if it was internally collapsed, the blockage could have cleared temporarily, only to return later. So please check that caliper soon, and if it is dragging, replace the brake hose.

Is it possible that a single rear brake has been doing the lion's share of slowing the vehicle down for 11 months?

It sounds like you had a lightly sticking rear caliper which caused uneven wear but not to the point where your rear brakes were doing more work than fronts.

If one or both of your rear brakes did do most of the braking, you'd know because the car would've been trying to spin itself under braking. You can experience this in a car by pulling the parking brake (in a car so equipped).

Not the answer you're looking for? Browse other questions tagged brake-calipers wear brake-pad seal or ask your own question.

5
New Pads, Rotor, & Caliper; Grinding, Squeaking, and Heat
15
Change calipers on both sides?
12
Brakes make a "POP" sound and then I can't brake
1
Is Repair Shop Responsible for Brake Issues?
1
Can you tell why this caliper has gone?
5
What do you do when brand new pads are rubbing on new rotor? It smokes and smells so bad and it seems like it is going to catch on fire
1
New Pads + Rotors, mechanic says rear pistons are seized. Cyclical knocking sound while braking moderate to hard
1
Brake pads fit too tight in caliper bracket
0
Car unstable after a disc and pads change?
0
If you can manually push in a brake caliper piston with a screw tool, can it still be bad?