I am currently designing a part that should always be on when the key is turned to On/Acc, and only sometimes on when the key is set to Off, or removed. My car is a 99 Camry, but I have a good understanding that this should be the same in any car.

The wiring Diagram makes the key switch look like a simple physical switch, while the 12v lines, both Always On, and Switched, look like they are electronically the same? 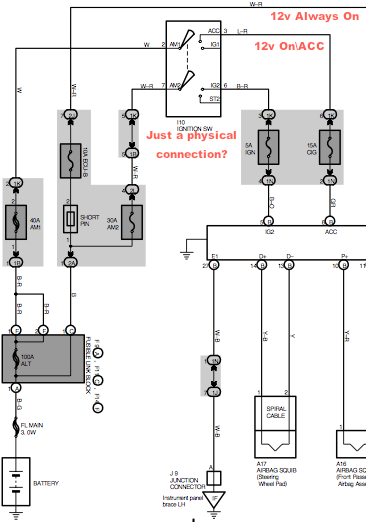 Update: This is the general idea I am working with. The Relay will self latch when SW1 is press, or when the car is on ON/ACC. When the relay latches from the 12v On\ACC, the diode should go into reverse bias so the circuit would then be powered from my fused Always On circuit, not the On\ACC circuit, while preventing backfeeding from Always On to the Switched circuit. I know a second relay would make things easier, but part count is important. 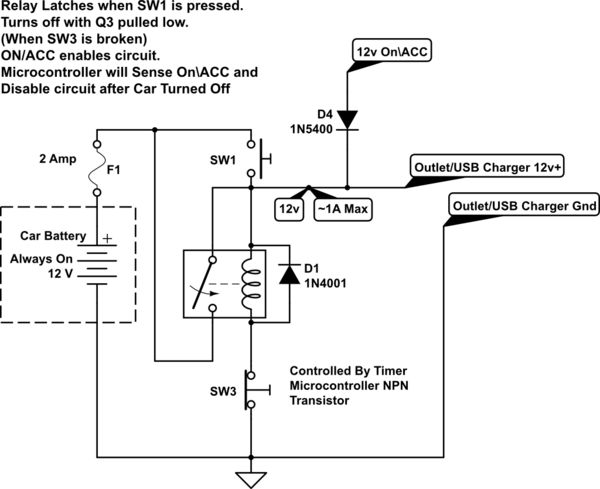 So, I guess the real question at this point is simply, not counting the fuses (just for theory), the Switched 12v and Always On 12v are the same exact lines, but the switched 12v has a physical key switch in the say, right? Shorting the two is bad practice, but nothing that will have major problems right?

If you place a jumper wire between a always-on 12V source and a switched 12V source, you've now turned your switched wire into an always-on wire (with power supplied from your original always-on source). This is not advisable, and is almost certainly not what you want. It could also create a risk of fire if the fuse for your unswitched source is too large for the wiring of your switched source.

As an alternate approach, consider an aftermarket GPS with a power cord connected to a switched source. The GPS turns on when you switch the power source on, and when you switch the power source off, the GPS begins running off its own internal battery, and displays a prompt saying it will shut down in 30 seconds unless you press "stay on." Perhaps this is the behavior you're looking for. If so, you'd need an internal battery in your device, and you would only connect to a switched source on the car.

The problem with a short if I understand what you mean by that term is that anything else on the circuit that is being shorted now goes on when your secondary switch is turned on. Only you know if that actually IS a problem.

Not the answer you're looking for? Browse other questions tagged electrical wiring or ask your own question.

1
How to wire trailer brake to 2014 Ford Focus ST
5
Start a circuit or device when you insert key in car ignition
4
Why does my car's switched 12V drop to 5V when I add an accessory?
2
Power to separate starter switch only when motor isn't running
3
Using the two blank fuse spots on my Prizm for accessories?
2
car power line after engine start
1
Interior lights aren't working, no power on ACC position
0
Choose Correct Diode