How does water in the radiator not boil?

I have been wondering why exactly is it that water in the cooling system of a car does not boil. The boiling point of water is 212 F, and normal engine operating temperatures can get up to 250 F.

I know that antifreeze also acts as anti-boil, but one time I ran straight water in a cooling system and it never overheated.

I was thinking that because the coolant system is closed off to the atmosphere, it may change the boiling point - any vapor that formed would have to compress the water (which basically can't be done) or would have to overcome the radiator cap. But I'm not sure of all this.

Because the system is kept under pressure and that raises the boiling point of the fluid.

This also explains why it is dangerous to open hot systems - the rapid expansion as the fluid reaches equilibrium can cause burns...

As another answer states, it's due to pressure, but here's some more information so maybe you understand better.

Below is a chart which shows how the relationship to pressure affects the boiling point of water (from this website): 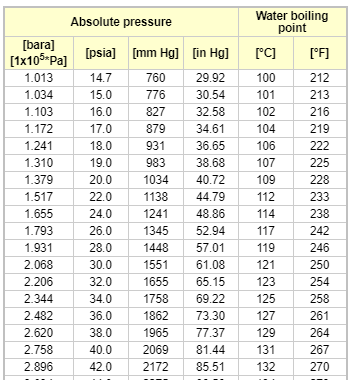 In the chart, it is using 14.7psi as air pressure at sea level. As the pressure rises, so does the boiling point. A typical cooling system runs at between 16psi and 22psi (I think that's as high as I've seen, but it doesn't mean they don't run them higher). On the chart, you'd add the pressure of the cooling system (let's use 16psi as the example here). The total pressure of the system would be ~31psi (14.7 for pressure at sea level plus the 16 for the system pressure). That would put the boiling point of water between 250° and 254 °F. This is just water. When you add anti-freeze/boil solutions to the water, it becomes higher than that.

The normal operating temperature of a vehicle will rarely ever see 250 °F. Your engine will most likely start seeing a large amount of ping/knock at this temperature. Most modern vehicles run in the 200-210° range. Older vehicles ran cooler down below 195°, but that's a tale for a different day.

Mixing fluids in solutions changes the physical properties usually in way that usually exceed the parameters of each liquid individually. Other factors include concentration as well as temperature and pressure.

This is one reason for thermostats,cooling fans and pressure relief caps to keep everything from rupturing hoses etc.

Other interesting properties to note are Flash point of antifreeze in a closed container is 111 C (232F). It will also auto-ignite at 410C (770F) It is toxic to humans and animals.

This information is available on the material data sheet.

Not the answer you're looking for? Browse other questions tagged coolant water or ask your own question.

17
2000 VW Golf heater won't blow hot air
4
Engine's Normal Operating Temperature
5
Ditch water in radiator
11
Car won't reach operating temperature
8
Evans Waterless Coolant
3
Coolant temperature in truck does not get to operating temp
1
Radiator cap pressure and how it impacts stress on cooling-system and engine?
7
Rusty coloured coolant?
1
What if I added a little tap water to the engine coolant?
0
Transmission fluid and coolant intermixed in transmission and cooling system. How thoroughly do I need to flush them? Recommended flush technique?