I got a new (used) prius a couple weeks ago. Apparently sold by a weasle. It's never started reliably, and the red triangle light comes on / off. Jumping it would start it though. I replaced the low voltage battery. It started 4 more times, then won't start at all. Not even with a jump. Also, the red triangle + CEL, and several other dash lights stayed on now.

The toyota dealer gave me a very vague diagnosis.

I'd really like to get some feedback before I spend $2500. Honestly, after like 2 hours on the web, I can't even figure out what the parts are that they need replacing.

I'm skeptical that these both actually need to be replaced. And even so at 5 hours, for 2 jobs, it's probably something I can DIY with some direction.

My standard cose reader doesn't show any code, so I figure the CEL is something with the hybrid system.

Below are screenshots from the written estimate. 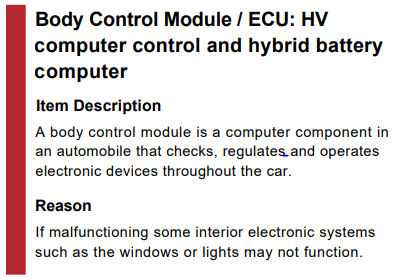