Mine is a 2013 Nissan Rogue S. I bought it used a month ago and have since been trying to identify the source(s) of its very bad fuel economy, so far to no avail.

The car has its own dashboard fuel economy gauge and the figure shown is routinely around 17 liter/100km (~14 MPG) for city driving. The official MPG figures for the car model are in the mid-20s. So my car is nowhere near where it should be in terms of fuel economy, even when taking into account the conditions of winter driving.

Since coming into possession of the car I have replaced with high quality parts the following: 1)The air filter 2)Engine oil & Oil filter 3)Coolant 4)All the spark plugs

To better diagnose problems I have bought a BlueDriver OBDII scan tool to record live data from my car.

I notice the following irregularities in the data that may point to the root cause(s) of my car's poor fuel economy. But I am not sure how to interpret them. I would really appreciate it if people from this community could help me out with their ideas.

1)Frequent and abrupt spikes in the voltages of the Air/Fuel (B1S1 Wideband O2) sensor when driving. The stoichiometric voltage of my car is 2.2 volts. The A/F voltage of my car would shoot up, always abruptly, to 4 or more volts (i.e. extreme lean condition) multiple times during a 20-minute drive. Lambda jumps with it.

In the following chart, AF sensor voltage is represented by the solid orange line, the Lambda value by the semi-transparent blue line. 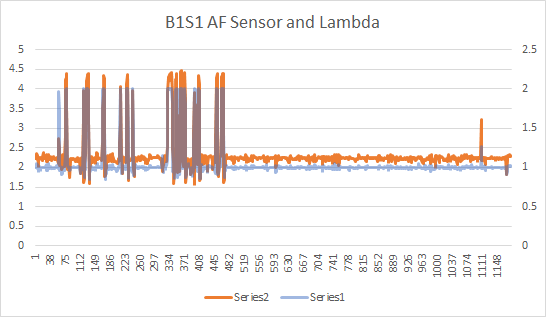 2)Every time there is a spike in the A/F voltage, the Short Term Fuel Trim would shoot up to compensate the lean condition. So in a short, low-speed 20-minute drive in the city the STFT would show multiple high trims (e.g. 25%).

In the following chart, the semi-transparent orange line is the AF sensor voltage, the solid blue line is the STFT.

There seems to be some strong correlation between the two readouts, at least in the first half of the trip. 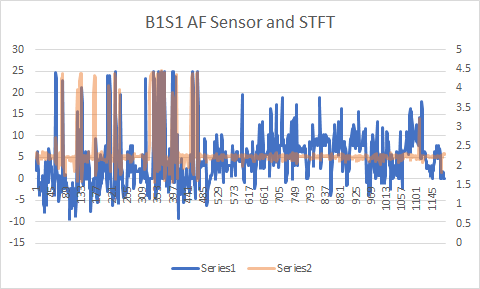 3)The scan tool indicates a permanent code of P0102 "Mass or Volume Air Flow Sensor "A" Circuit Low." I have tried swapping the Mass Airflow Sensor that came with the car with another used MAF sensor. The same bad fuel economy has persisted. I have not yet tried installing a brand new MAF sensor because of its cost. I would like to eliminate other possibilities before investing in a new MAF sensor.

I have plotted the figures for RPM and MAF gram/second on the same chart and it seems to me that the MAF sensor readout basically tracks changes in RPM, so it's not obvious to me that MAF is malfunctioning (though I don't know for sure whether the sensor under-reports the amount of air entering). 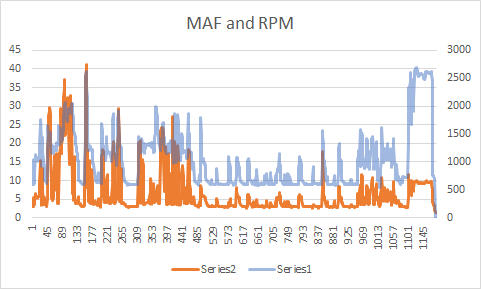 And it doesn't seem to me that I have a vacuum leak problem as the sudden spikes in the A/F sensor voltage occur during driving, and from what I have learned online the effect of vacuum leaks is usually more pronounced at idle and declines as the car accelerates.

I can't tell to what extent the sudden spikes in the AF sensor voltage and STFL are correlated with changes in MAF and/or RPM data.

Please let me know your thoughts. As for myself, the following questions are swirling around in my mind:

(1) What can cause the voltage of the A/F sensor to spike abruptly as in the case of my car? I have read in multiple places online that these wideband O2 sensors don't change their voltage suddenly like the traditional oxygen sensors do. Is it normal for AF sensors to have sudden spikes at all?

(2) In connection with question one, I have read somewhere that sudden spikes in AF sensor voltage may have to do with a shaky ground wiring. If this is a possibility, how do I go about confirming or ruling it out?

(3) Can my bad fuel economy really be caused by a bad MAF sensor, given the P0102 code? Is it theoretically possible that a bad MAF sensor is causing the kind of AF sensor voltage and STFT fluctuations seen in my car?

I'd appreciate any input from you. If you'd like more data from me please ask. Thank you!

Thank you so much for your advice. I do think I need to reset my ECM.

By the way, I have posted a whole bunch of charts here for anyone interested. Maybe they can pick up clues that I am oblivious to.

If there is no significant improvement after that then clean MAF sensor, Throttle body and Idle Speed Control (ISC) sensor with special cleaning sprays. Replace the gaskets if damaged. The TPS (Throttle Position) sensor too sometimes needs adjustments as per oem specifications.

Inspect for any vacuum leaks.

Our cars ECM/PCM need resetting to factory mode and relearning according to new driving behaviours. Which can be easily done by disconnecting negative battery terminals for few hours. Clean (and retighten) all the ground terminals with electric contact cleaner spay.
Now, reconnect the properly cleaned battery terminals firmly. Start the car and idle engine (without throttling) for few minutes then take the test drives.

I just had an experience with MAF sensor voltage spikes at idle while scoping the signal wire to the ECM. Long story short, the AFR (air fuel ratio) sensor was the fix.

Not the answer you're looking for? Browse other questions tagged troubleshooting fuel-injection or ask your own question.