What problems will I have if I use a rusted input shaft on a transmission?

I have an old (25 years) transmission from a BMW E36 which I want to use. The transmission must have sat outdoors for a while, because there was white scale on the outside and inside of the bell housing. I removed the rusted and seized clutch fork and release bearing guide tube.

Unfortunately there was a lot of rust all along the input shaft and the clutch wouldn't slide along the spline.

I cleaned up the input shaft the best I could using 600-1200 grit wet and dry sandpaper and WD-40. The clutch slides smoothly now (by hand, not installed yet).

There is a bit of pitting on the shaft. I'm not sure what are acceptable tolerances on where the input shaft slides into the pilot bearing on the engine. I am also hoping the input shaft seal did it's job and there is no water ingress into the transmission (I will be replacing the seal).

This is an expensive transmission and replacing the input shaft is not an option. What problems would I face if I go ahead and install this transmission? 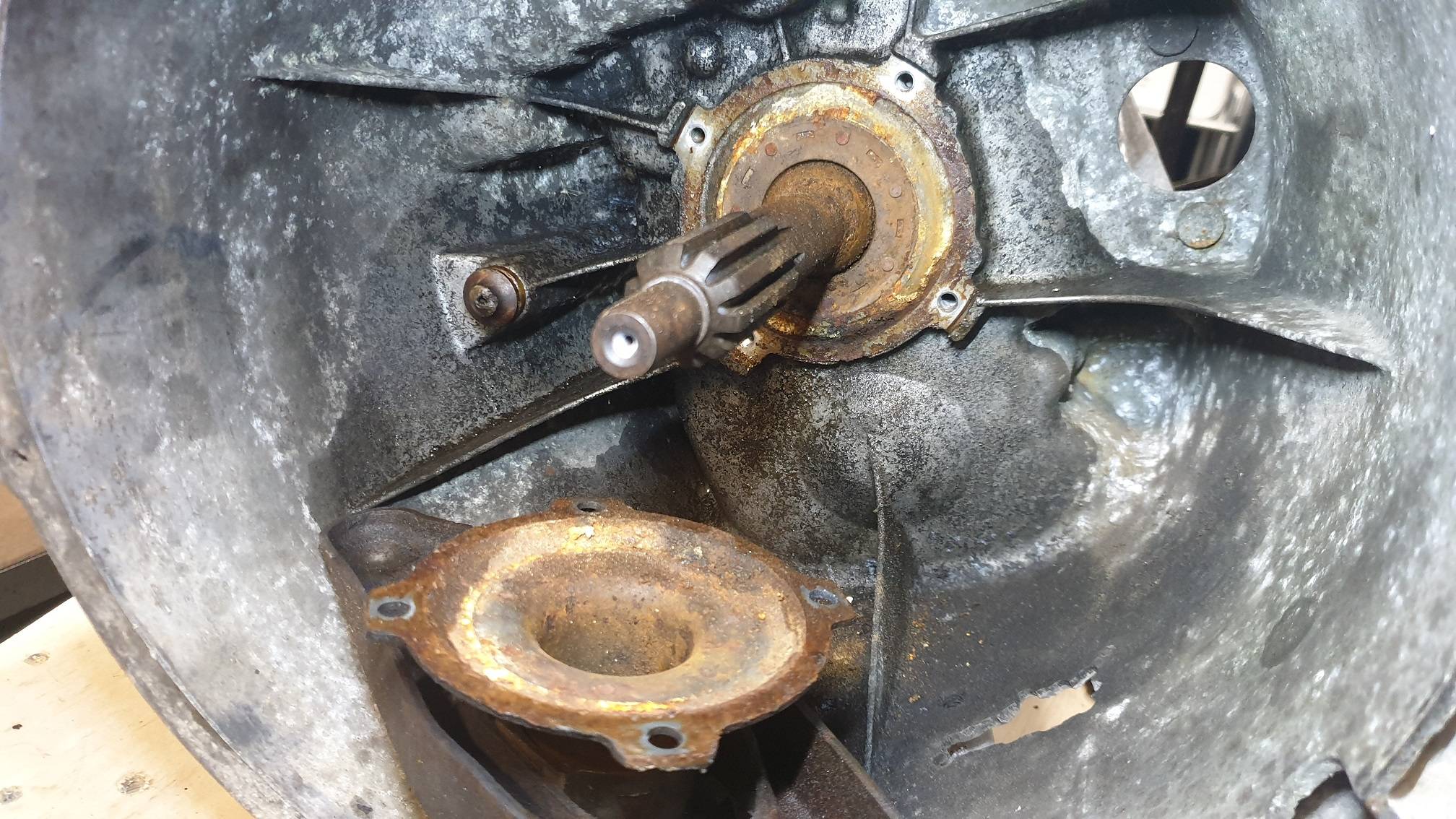 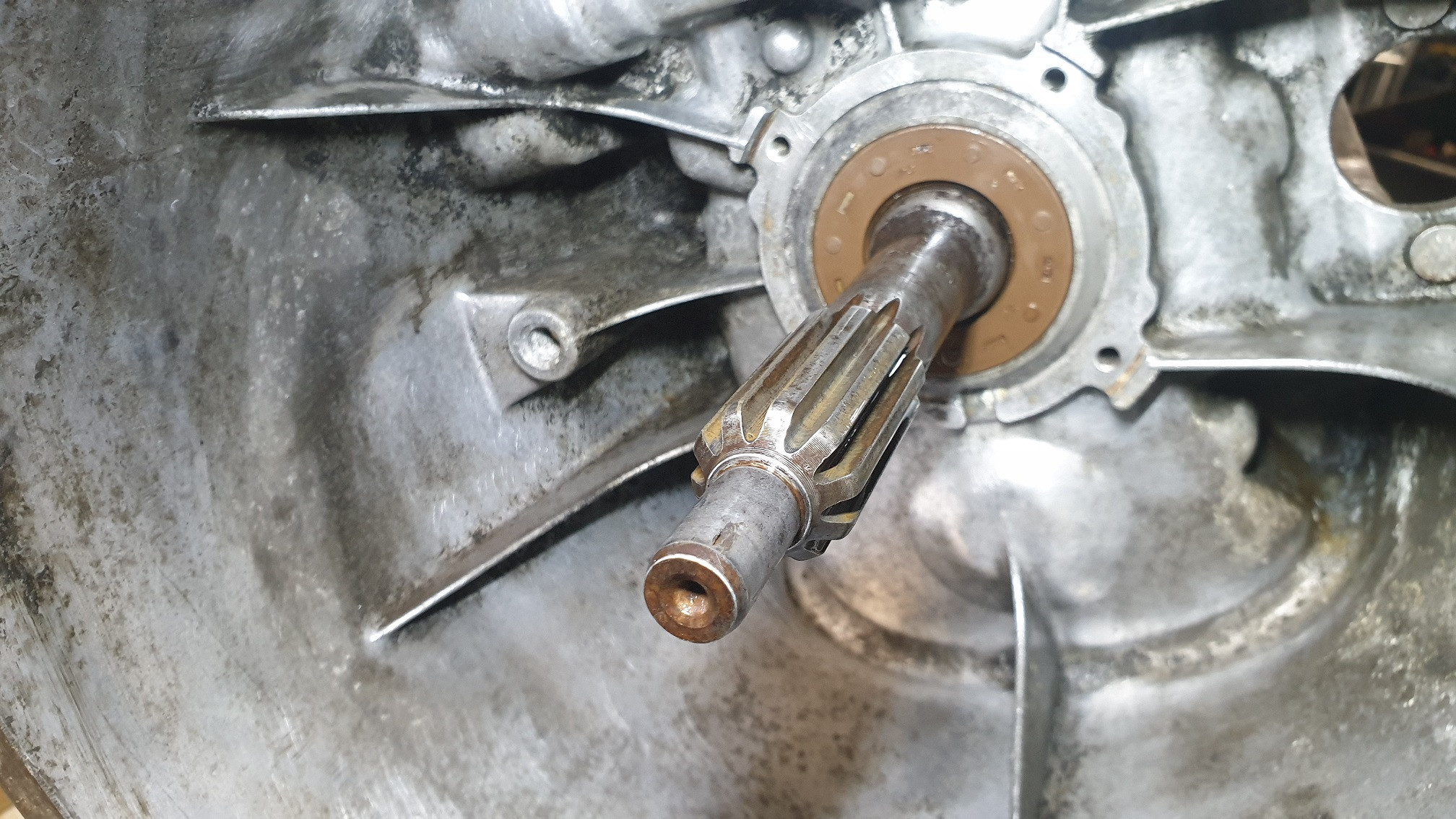 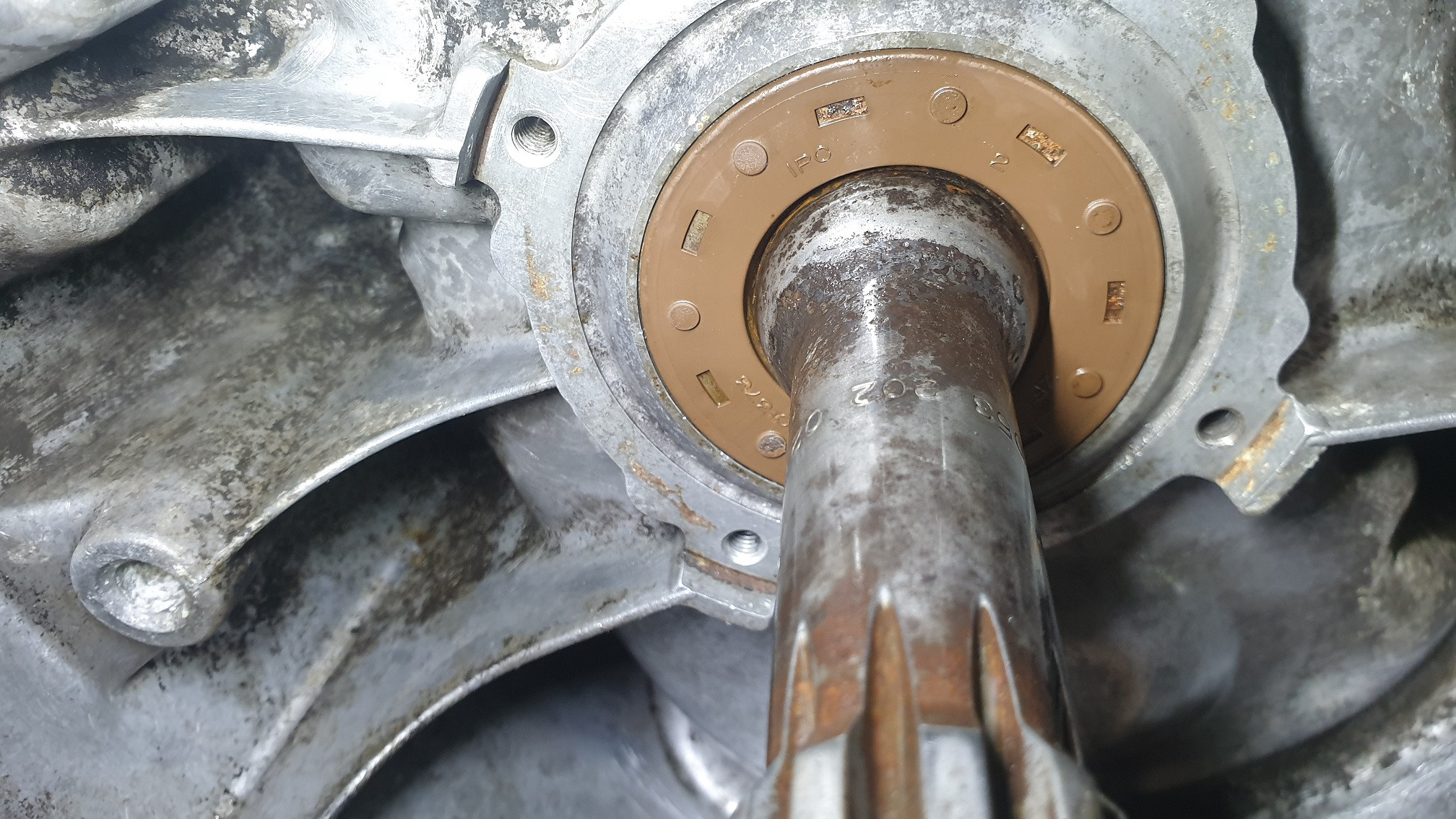 These are the potential concerns, from the pics it looks like you've cleaned up the input shaft pretty well and I don't see much evidence for damage so personally I think you're okay there. The one thing I would suggest is getting in between the splines a bit more, I would suggest a rotary tool for that rather than sandpaper.

I would clean it with a soft wire brush fitted to a drill or angle grinder then a little wet and dry to smooth any roughness. You can still clearly see machining marks on the splines, so you can’t have lost much material. I don’t think you will have a problem there.

There's no issues here. You've cleaned up the surface rust, which in reality would only prevent the friction disk from sliding on the input shaft. Since you've cleaned the input shaft and the disk slides free, there's not much to worry about here. I'd not think twice about using this tranny post clean up due to this minor surface irritation. Since the input shaft is most likely solid metal, it would take a LOT of corrosion to create an issue (I'm talking a hundred-years-of-open-elements [or more] amount of corrosion).

The little bit of corrosion which you've taken off is not going to cause you issues. The input shafts come with a certain amount of play between shaft and the disk, which your minor amount of cleanup is not going to affect it to a point where it would cause issues. The friction disk doesn't really move on the shaft all that much anyway. It just moves a little during clutch release and engagement, which allows it to move away and towards the flywheel. Most of the time (at a guess over 98+% of the time the engine is running) the disk is stationary. Also, in short order after being used a few times, the disk will effectively clean up the area on the input shaft where it will be riding. If you hadn't cleaned it up and as long as there was no real stiction between the two parts (disk slid without too much resistance), it would have self clearnanced and been in good shape for the life of the clutch. Again, not an issue.

Other things you'd want to ensure is the nose cone which the throwout bearing rides on will need to be cleaned. I'd throw it into a bead blasting cabinet if you have one available to you and get it cleaned up. You don't want the throwout bearing sticking, keeping the clutch partially engaged during use, which would bring the life expectancy of the clutch down in short order. Don't use grease or other lubricants which will fly off in this area, as this will run the risk of contaminating your clutch assembly and cause slippage during use.

Not the answer you're looking for? Browse other questions tagged transmission rust or ask your own question.

1
Downshifting to a stop- wear and tear?
4
Auto Trans gear selector does not engage ANYTHING?
4
Will changing my transmission fluid cause problems?
2
Parts to replace when changing transmission
3
How to disassemble the ZF S6-53 transmission (BMW Jaguar Land Rover etc)
2
Why would my car not roll freely in gear with the clutch in?
0
Can a faulty throw out shaft bearing cause the input shaft of transmission to break?
0
Did I hose my transmission?