Why do my windshield wipers fail randomly when turned on?

My car is a 2008 Volkswagen Beetle (US model). Most of the time, the windshield wipers work just fine, including intermittent mode. However, when turning them on, there is a 20-30% chance that nothing will happen, or that they will start to turn on, but then stop partway. When this happens, turning them off and on won't do anything for a while. At this point, I stop the car, wiggle the wiper blades by hand, and try turning them on again until they work. After a few to several wiggles, they start working again, and continue working until I turn them off. Sometimes, if I wait long enough, they will start working again with no intervention.

I don't think there is a problem with the fuse because like I said, they work normally most of the time (and I checked the fuse and it looks good...even swapped it with a different fuse with the same rating). I suppose there could be a problem with the wiring somewhere, but not sure where to look. It seems like perhaps the wiper motor has a dead spot somewhere, and if the wiper gets caught in this dead zone when they turn off, it won't start again. But during normal operation, momentum carries it past this dead zone, so it's not apparent. This is just a guess. Any ideas?

I took it to the mechanic and told them about the problem, but their "diagnosis" was to turn on the wipers while performing other maintenance, verify that the wipers worked the entire time, and subsequently tell me they could find nothing wrong. At that point, I didn't want to explain how it only fails on startup, because I just wanted my car back.

This could be a bad wiper relay, however when I've dealt with intermittent wiper issues it is often the linkage assembly that is the problem, motors tend to work or they don't. Every wiper system I've seen uses the same principe: the linkage transfers the spinning motion of the electric motor into a back and forth motion through some gears to a motor arm, which spins around, pulling the linkages back and forth, moving the wiper arms back and forth. 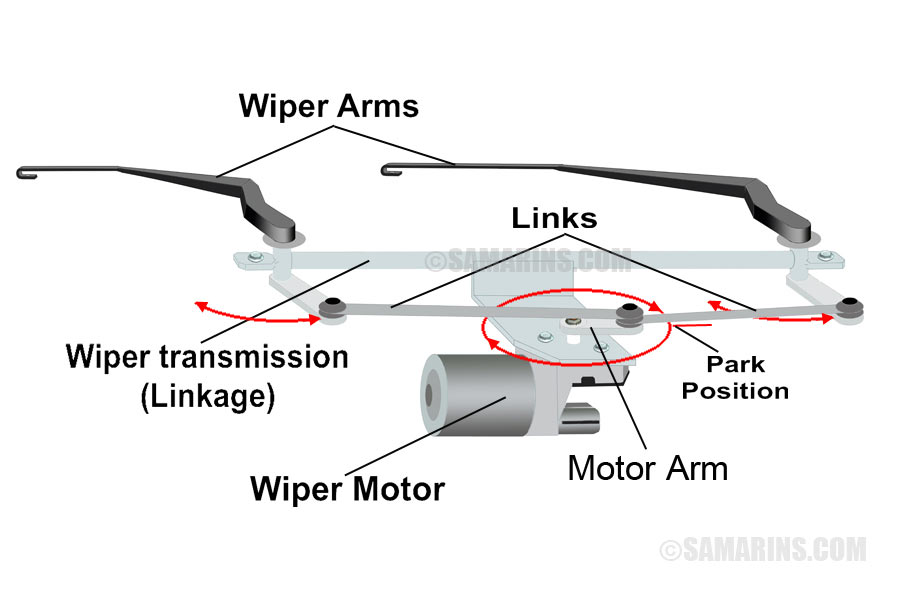 Regarding the linkage here's what I would look at from most to least likely:

The steering column selector or wiring could also be an issue, from the description of your problem I would say they are a low possibility, but can't be discounted.

What I would do is pull the linkage and either replace or refurbish it. If brand new ones are super cheap and easy to get then that would likely be the way to go. If they are expensive, hard to find or like me you just like fixing things then take it apart, clean it and put it back together, liberally applying silicone lube to the joints and loctite to the arm nut. It's probably worth replacing the linkage arms at the same time as they do wear out.

Generally it's an easy job to fix the assembly requiring no specialist tools, depending on the car getting the linkage out can be a real pain. I've never worked on a beetle so I don't know the effort involved in this particular case.

Not the answer you're looking for? Browse other questions tagged vw windshield-wipers beetle or ask your own question.