Why are automotive engine force output specified in terms of torque [Nm] and not forward thrust [N]?

For instance, an example catalogue extract for a motorcycle reads-

From a user's point of view, surely they are more interested in how much forward thrust the vehicle can provide, as opposed to the torque at the rear wheel (which is also implementation dependent). Thrust is also more easily relatable to other parameters of interest, such as acceleration (assuming a known mass).

Perhaps there is an argument that thrust is dependent on further variables such as the effective rear wheel outer diameter (tyre pressure, tread etc.), road conditions (amount of slip), so only a reference figure can be given. However, I would argue back that torque by itself gives less information in terms of user experience.

From a quick check, aircraft engines are specified in terms of thrust, and not torque. So why not for bikes and cars? Interested to hear different points of view.

I'm not a 100% sure about the correctness of this answer, (please comment if you see errors)

First of all, the torque number specified, just says so much. The number is actually just the max value of a curve (because the torque is dependent of the engine speed). The torque curve is the interesting thing.

This means that if we compare two cars with the same weight, it's not certain that the one with highest max torque and max horse power will win in a dragrace. And even if the two cars had the exact same torque and hp numbers, it's still not certain that the one with the higher numbers would win. Because it's also dependent on the gearbox gearing and final gear (and wheel size).

The following picture shows a torque curve for a car, this curve also includes the gearbox! 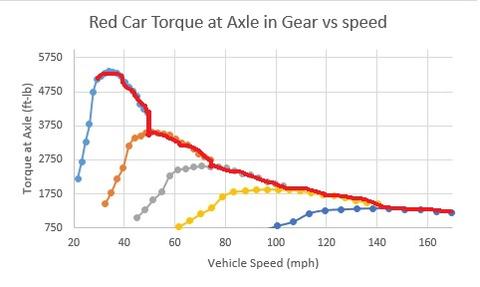 The colors except the red shows the torque for each gear, and the red one just just the combination.

However you'd have to take into account the weight of the car, the wind- and rolling resistance etc. etc. to get a good view of the acceleration (which I assume is the interesting thing). And in that case, couldn't you just have a acceleration curve?

Also, it's more likely than not that the manufacturer would think it's simpler just to provide a number, and not the full curve. This would probably be the max number, and the question is how interesting the max thrust actually is since it only occurs once, and then drastically falls. So in that case isn't is just better with the 0-60 numbers as @Kitsunemimi says?

There's a lot that can be said about this topic, but Solar Mike and Moab pretty much sum up the main reason for it. Torque isn't a metric that was derived for the purpose of describing "user experience", it's a measurement of the amount of force that an engine is capable of producing. Engines spin, therefore they produce torque. Rockets and jets push, therefore they produce thrust (generally). At the end of the day, it's just another number that describes the characteristics of a vehicle - as with many such numbers, you need to understand how to interpret it for it to be useful to you. The number you're probably more interested in is the 0-60 mph time.

I'll add a little to Kitsunemimi's answer (which is totally correct).

Simply, thrust is ONLY a linear force pointing in a single direction.

As stated, everything with ICEs ultimately is culminating in rotational energy (torque) which will lead to thrust (in a sense, but not really). Even where the rubber meets the road, we're not dealing with linear force, but rather many rotational forces that combine, moment after moment, to produce linear motion. (Note: a good way to see this is to observe a drag racing car's back wheels on launch in slow motion. Amazing.)

As you were noticing, all of the other factors of "user experience" are quite variable: road friction, tires, load weight, et al. The one constant that the manufacturer can sell to you is the stock engine output - independant of all these variables - which is just the torque output. Finally, as mentioned throughout, what ultimately determines the actual Nm/s² that the driver experiences will change dramatically depending on gear ratios, tire pressure, wheel size, and even the environmental factors like temp, humidity, pressure, etc.

Even with EVs, they still use torque and HP as ratings because the user can best infer what the experience could be like. They totally bypass the torque curve aspect of the equation, but it's still all about rotational force, rather than linear.

1
Engine torque throughput curve is flat or wavy in low gears between 2000 and 4000 rpm
10
Why does the power output peak and then drop as engine speed increases?
6
Why do service manuals specify a range for torque? Are there any reasons for being at one end or the other?
4
Is there is a relation between temperature of engine and the torque
1
Why are engines mounted so that torque goes sideways?
8
What fasteners should not be loosened using an impact wrench, and why?
0
Average human force and torque wrench length