Why do motorcycle pistons need replacement and not cars?

Motorcycles, especially dirtbikes and other types of racebikes require pistons to be replaced quite frequently, say every 30 hours of riding.

These bikes often have a rev limiter around 10,500 rpm, a little above cars like some Ferraris or the BMW e92 m3.

Why do the pistons on these bikes need replacement, while the car engines only need frequent fluid changes? If you're the owner of a car like a Porsche 911, Audi RS6 or the like, it's not rare for these cars to see high revs, especially if you live close to the german autobahn or bring your car to the track - but they still seem to have a comparable lifespan to a more modest car. 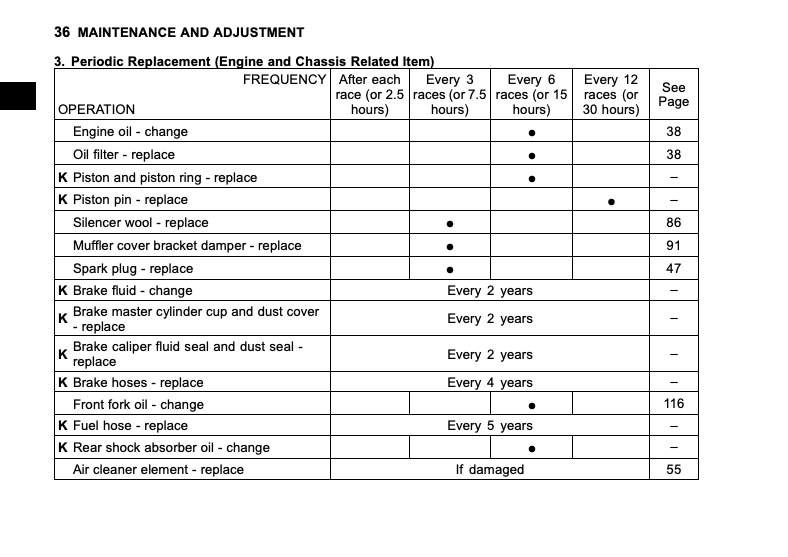 The 15 hours here are as many have mentioned, for racing applications and not the average sunday rider. But still, 100 hours is a huge increase from the manual and that is still quite frequent in my opinion.

Making an assumption that you are talking about 2 strokes.

Piston life varies. To an extent on road 2 strokes they are a consumable, but they might be expected to last 20000 miles plus. On others far less. For example an Aprilia RS125 lists checking the rings at 8000km (~5000 miles), and by the time you have got it far enough apart to check them you may as well replace them; and rule of thumb do I do the piston every other set of rings.

If you look at a 2 stroke cylinder you will see very large ports. These will give the rings a hard life, as they tend to expand into the ports and then be pushed back at the edge of the ports. Often the more highly tuned the engine the larger these ports are, giving the rings a harder life. Some things can be done to reduce this (for example, NSR125 has a bridge over the middle of the exhaust port supporting the piston rings, hence 2 smaller ports rather than 1 large port), but these can affect ultimate performance. Further 2 strokes generally run a lubrication system where the oil is passed into the engine with the fuel / air mix, which is likely to provide less perfect lubrication. Further, with the shape of the ports, and the limitations that provides to coolant passages, the barrel is likely to be unevenly cooled, especially as it is just warming up.

Race 2 strokes (either on or off road) might have a far shorter piston life, with far larger ports plus likely to be run at high revs for far more of the life. From memory some Yamaha TZ250s list new rings at 250 miles, new pistons at 500 miles and new cranks at 1000 miles. But on a race bike, performance is the major factor and extra maintenance far less of a concern.

KTM even list the electric 2 stroke oil pump to be replaced on some of their bikes at 80 hours.

Changing pistons is often not that hard. As an amateur for an RS125 I work on the basis of a gentle afternoons work to remove fairings, drain coolant, remove the head and barrel, replace the piston and reassemble

I possibly should point out that in general 2 stroke bike engines do not rev higher compared to 4 stroke bike engines. Highest reving road 2 stroke I have is a Gilera CX125, red lined at 12000rpm. For comparison, some versions of the Honda CBR250RR (a 250cc 4 cylinder engine from the late 1980s) had a red line marked at 19500rpm. Most modern 2 strokes use reed valves which are not that suitable for very high revs, compared to disk valve 2 strokes

I had to downvote this question due to the OP spreading misinformation. It's apparent that they read a single article on dirt bikes somewhere and then decided to post this misguided question.

That being said, "motorcycles" do not typically require Piston work unless they suffer a catastrophic event. The same goes for cars. Theoretically "Race Bike" engines can wear out faster than car engines due to the fact they operate much faster, but this isn't always the case. I know a few guys on Sport bikes with over 100,000 miles on the original engine. That's extremely rare mind you, because most bikes are crashed well before 50,000 miles, but they have the potential to last a very long time. Also, sport bike engines are built better than car engines by a huge factor. My 2000 TL1000R, for example, shipped with forged pistons and rods. That was 20 years ago.

With that cleared up, I have to assume the OP is referring to dirt bikes, since he mentioned "hours" rather than miles. I admit I don't have much knowledge in that department, but I seriously doubt that anyone outside of a few proMX racers would be swapping out their Pistons after a couple of rides. Dirt bike sales would plummet if they needed top-end maintenance every other week. And like Caius stated, you'll have to enlighten us on which motorcycle has a rev limit of 10,000 RPMs, because I've never heard of one.

The dirtbikes you're talking about are race bikes, 4t or 2t, spend a lot of time at WOT, or at least constant high reving, the engine is stressed. Take one of those bikes and putt around on it, it will be fine. It really has nothing to do with them being mototcycles and more about them being race vehicles.

Same can be said for race cars. For example your full on dragster; normally those engines last one or two passes before being torn down or replaced entirely. Stock cars are running 140-200mph for hours, NASCAR teams tear the engines down after races to see if it needs or can be rebuilt, or replaced.

Regular cars AND motorcycles simply seeing street duty, whether it be a harley, scooter, dual sport motorcycle, are not going to need an engine tear down every few hours. Or days.

To put it in perspective; an hour of idling your car is equal to 32 driven miles, so six hours of a dirtbike running at near redline, is a lot of "mileage".

Not the answer you're looking for? Browse other questions tagged engine motorcycle oil or ask your own question.

6
1994 Suzuki GSX600FR Katana - How do I know if motorcycle chain & sprocket need replacement?
4
Why is this motorcycle burning oil, and how can I get it to stop?
4
Why do old motorcycle engines rev so slowly?
7
Motorcycle Starting Motor does not crank, WHY?
9
Why don't cars use kerosene (and engines optimized for kerosene)?
6
Why do some modern gasoline cars burn oil?
2
Why don't cars need a blower?
15
Do I need to take special care of my new motorcycle in this particular scenario?