I am working on a 1988 Accord (CA) that has been sitting for some time. There was a problem with the cooling system - air pockets and bad water pump bearing - so I replaced the pump and drained the coolant.

The coolant that came out was a brown, rusty colour. I looked at the radiator hoses (which, incidentally, are in very poor condition) and noticed about a 1mm of brown, rust-coloured sludge on the bottom of the hoses. I did a flush of the system with a cleaning product combined with demineralised and again drained the system. It came out the same colour. I flushed the system again with just demineralised water about 5 more times (filling the radiator up, bleeding the air, running with heater on until hot, draining), but keep getting the same colour coming out - not appearing to get any cleaner. In fact, after 3 drains it appeared to get a little darker.

At this point I'm worried if it's oil intruding into the cooling system, but it doesn't appear "creamy" or thick like oil in coolant photos I've seen before. The substance left on my catch-tray after draining seems kind of pasty and drys almost powdery. Further more, the drained water doesn't seem to seperate like oil and water probably should (even after leaving a bottle sitting for a few days). It doesn't feel thick or greasy and it doesn't smell - it feels like normal water only brown.

I checked the dipstick, too, and the oil there seems normal. I also had the rocker cover off recently and didn't notice anything unusual there either.

The car appears to run fine in all other respects - no issue starting, no smoke from exhaust. I do strongly suspect though, due to the condition of the hoses and old thermostat, that the last owner ran the system with normal water and let it sit for a while.

Could this be oil in the cooling system? Or is it just really old and rusty?

You can see the image below a series of flushes the first being on the left. 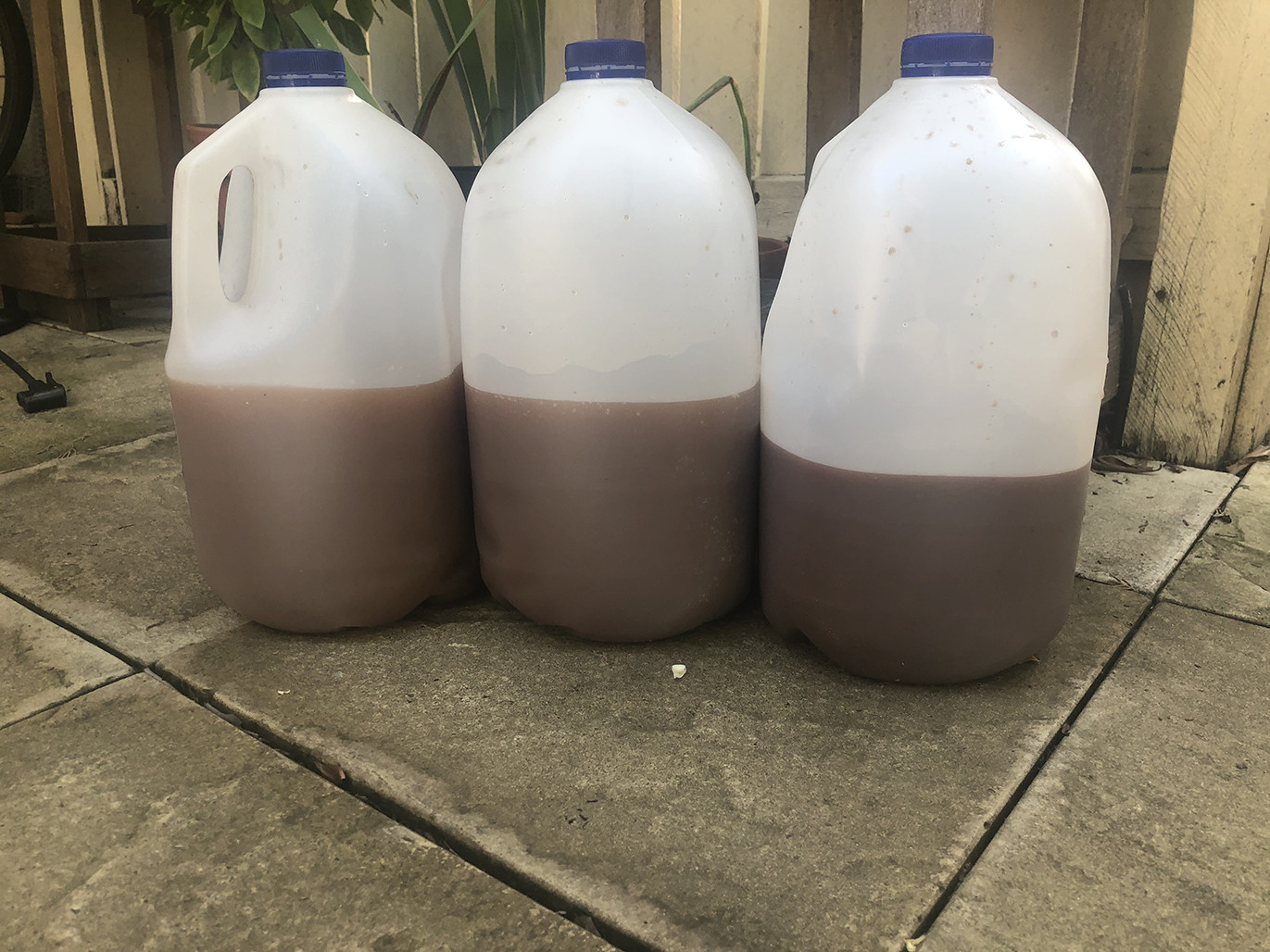 As for why it continues to look brown, you probably haven't flushed it enough times. When I had an oil-in-coolant condition on one of my vehicles, it took the mechanics at the dealership 12 flushes for the coolant to come out clear. And this was after having replaced most of the cooling system's hardware (radiator, fill tank, oil-cooler).

Air is getting into the cooling system to cause rust. The most likely place is the radiator cap ( not the reservoir cap ). The radiator should be "sealed" , the only exchange should be into and out of the reservoir which acts as an air lock to keep air out.

RUST. A lot of it. In the form of micrometer-sized particles.

It behaves like a clay or mud. You cannot simply flush it away. You need a flow, vibrations and temperature to get all of it dissolved, i.e. you have to run the car for a while. And you need to drain the cooling system right after stopping the engine, or else the rust will settle back. Rinse, repeat.

In a similar case, I had some success by connecting a filter in the heater line. A 10" textile filter at 10 micrometer will clog and will need replacement few times.

Your car has a cast iron engine block (now aluminium blocks on recent cars). So with time, no movement and a little bit of oxygen in the coolant, your engine block will rust from the inside. There is nothing to worry. It's just a pain to remove. Keep flushing and it should be fine.

Oil or coolant leak could be just through micro-crack which could be slow and not so easy to noticeable process. When you check coolant reservoir you should notice oil and thick fluid on top of (reservoir). Also if there would be leakage in vice-versa system then fluid levels should increase either oil level or coolant level.

My guess is that you had some rust in your systems because of age. It's worth to change coolant time to time (I think it's recommended to change once in 2 years, look at coolant manufacturer information) and flush system many times.

3
Coolant still in expansion tank after draining from engine and radiator — BMW E46 (2003 330i)
5
2005 Subaru Forester XS overheating
2
oily sludge in coolant reservoir
7
What exactly is meant by “engine coolant”?
8
Evans Waterless Coolant
1
Drain coolant as much as possible through radiator drain valve?
0
What portion of the cooling system is rust formed in?
1
Oil vs Coolant Temperature
3
Why do you people run distilled water on cooling system and flush it, is it neccesary?