We have a 2011 Prius that sometimes does not start up right away. When we press the brake and power on the car, the lights will come up, but the READY symbol on the dash does not show up. We have to turn on and off the car maybe 4 or 5 times before the car actually starts up.

After this happens, the car usually runs fine for a whole week or month. Then right back to doing it again. This has been going on for about 6 months. And i'm ready to address it.

When the car doesn't start up, a whole bunch of car symbols show up, but I've never taken note of which are showing up, because it seems like the same symbols that show up right before the car boots up normally, but because the car doesn't fully start right away, those symbols stay on.

Any ideas what the issue is?

Update: Some have suggested I get the battery tested.

The battery reads 12.30 volts when the car is completely off.

It dips down to 11.85 volts when the car is first turned on.

These are the symbols when the car won't turn on. 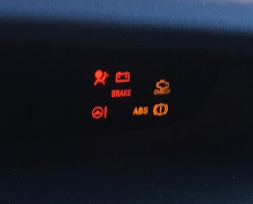 Browse other questions tagged toyota starting prius or ask your own question.