Symptoms of Lean or Rich carb settings on a motorcycle

I have a 1981 Yamaha XS650. I recently put in K&N stock replacement filter (ie, they are in the airbox and conform to the size of the original), however they may be leading to a leaner mixture because they purportedly let through more air.

I want to tune my carbs (yes, I know that the B34s are notorious for being lean in the first place). I have attempted adjusting the pilot screw, which did alleviate the popping symptoms and gave me a much smoother ride at 25 mph.

In order to truly tune my carb, I want a better understanding of the symptoms of lean vs the symptoms of rich. Terms often used are: Stuttering Hesitating Running Rough etc etc

Please advise me on what the real symptoms of lean vs rich system is. Thanks.

In your post you indicate that some of the symptoms you have read are contradictory. I will try and clarify between the two conditions and attempt to give you guidelines in troubleshooting between the two.

Symptoms of Lean and Rich

Here are some basic symptoms, some duplicate

There a few common issues that pop up with motorcycles that have carbs.

1. Rubber Intake Manifolds - Most modern motorcycles (Mid 1970's on) have rubber manifolds attached to the cylinder head. The carburetors fit into these manifolds and are clamped. Over time they become hard, brittle and cracked and suffer from dry rot due to excessive heat at an accelerated rate.

You can test for air leaks by running the motorcycle and squirting carb cleaner at suspected cracks. The idle will reduce a bit if you hit a winner. As well, you smell a sharp odor from the exhaust as it is pulled through the motor and undergoes combustion. Don't breath much of that in and use fans while doing this. If you don't feel comfortable with carb cleaner you can use an oily thicker spray like WD40 that will clog the crack better temporarily and reduce the idle. I'm typically looking for the odor though, it's sharp and pronounced and unmistakable as opposed to, "did that idle just drop a bit, let's do it again..." 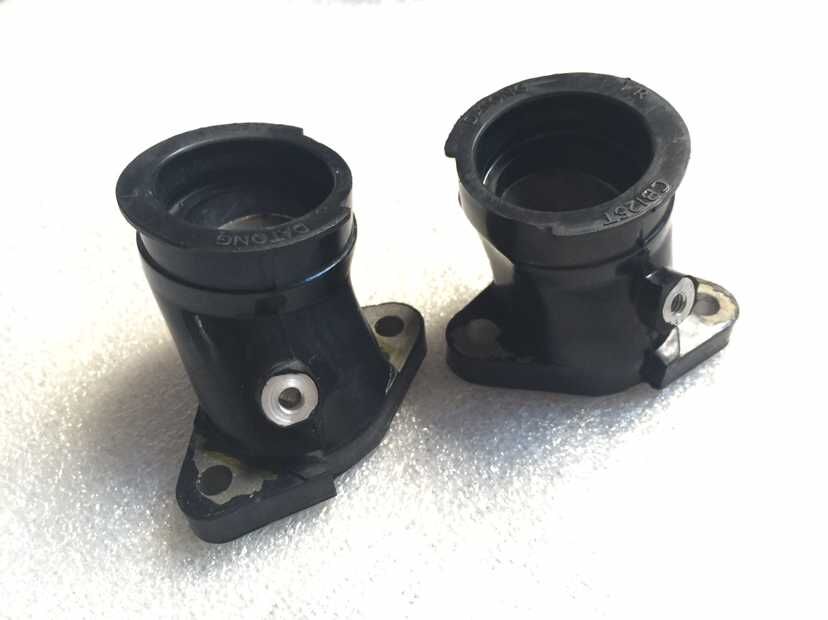 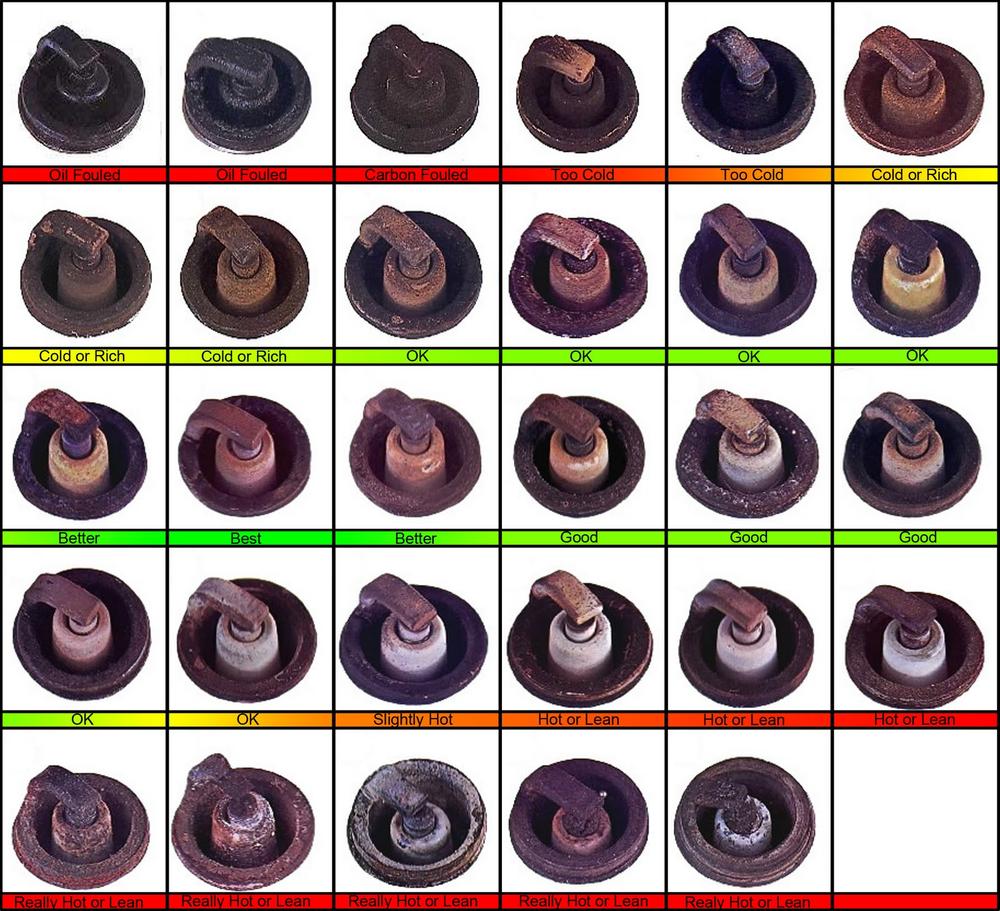 Rich conditions are considerably less frequent than lean. Much of the issues lay in the fact the people are typically creating lean conditions upon reassembly of carburetors. Rich conditions can be created by people too but the condition is usually caused by:

Sparkplugs Are Your Breadcrumbs

Again, refer to the sparkplugs. Look at the chart. See what you can see. If you have a multicylinder bike and multiple carburetors you will NEED to check ALL of your plugs. Each carburetor can have an individual issue.

I have not put any real information on how to resolve the various conditions and howto set a float consistently or when to use a different size main jet or raising and lowering your jet needle. The post would just turn into a short novel. I'm already going to get some deserved tl;dr on this one.

A shop manual (particularly one with colour photos) will offer some spark plug diagrams / photos, to compare against your plugs, but they're not particularly useful.

As you said, claims are contradictory. The problem is, that a symptom of too lean/too rich is that it doesn't run as well as it should. That's both ways. So a too-lean symptom for one person is the same as a too-rich was for someone else. The best bet is to do one direction or the other and see if it gets better. Sometimes this can be accomplished by tricks (blowing in the vent tube to lower the gas level and lean it out (but just try to do that at full throttle!)) but more often it's going to be trial and error with part changes. This is why people pay money to dyno operators to tune the bike and do all the jet parts x throttle position x engine speed matrix testing at once. You can take the long approach and tune it yourself with ears, feel, butt-dyno and notes - lots of those! - over some time.

In order to tune your carbs you also need a better understanding of how the various circuits affect the mixture at different throttle openings.

I'd suggest starting with a read through the Mikuni VM Manual. The VM models are older, direct-action slides rather than the vacuum-operated BS34, but the same principles apply. In particular the last diagram "Functional Range Effectiveness of Tuning Parts in relation to the Throttle Valve Opening (Approximation)" illustrates which parts (mostly) affect which throttle positions. It's good that they put "(approximation)" in the title - because the diagram lies - everything seems to affect everything else, but at least it gives you an understanding to start from.

To tune your carbs, you need to either go through everything systematically, starting at the main jet and working down, or you can choose to just identify some problematic parts - particular throttle openings x engine speeds - and address those. Factory Pro has a CV carb tuning procedure for lower rpm engines that's an appropriate systematic procedure for your XS650.

A lean mixture in a motorcycle will symptomatically be hard to start - and you will see less/little fuel in the carburetor and if you remove the plug(s) immediatly after starting attempts, the plugs will be dry rather than an overly rich mixture where they might be "wet" with fuel.

If your bike runs rather bad/worse when cold, but better when warm it is likely running lean.

the easiest thing to do is to raise the needle a notch (or more) if it is too lean. Just don't loose the tiny "E" clip that locates the needle in the throttle slide. Sometimes they spring over a little so be ready for that.

Some carburetors do not have adjustable needles. You can enrichen them with a little washer under the E clip. I have used pop rivet washers for that.

12
What's the meaning of a "lean" vs "rich" air fuel mixture
6
Properly draining a motorcycle carburetor
3
What is this tube coming off from 1 of 2 motorcycle carburettors?
5
Engine lean issues
1
Motorcycle V-Twin CV carbs riding poorly on 1/4-3/4 throttle after carb rebuild
0
How can I diagnose if my engine is running lean or rich?