Creaking sound from the rear right side of the car

I have a 2017 Ecoboost that's currently at ~27,000 miles. Recently, I noticed that the rear right side of the car makes a creaking sound when making sharp turns at slow speeds. Sometimes, the noise occurs when driving on uneven (not bumpy) areas. I live in Durham where roads are kind of hilly. Majority of the times though, the sound occurs when making a sharp right turns like when pulling into the driveway. The sound is sort of like your typical bed creaking sound and seems to be coming from the right rear side of the car.

I took it to a well rated auto repair shop in the area and after their diagnosis, they said that it's because the mufflers and the muffler brackets which should be tightly coupled seem to have a bit of play between them due to which the noise is being produced. They applied lube to the brackets and said that that should take care of things. However, as soon as I drove off and approached my driveway, the sound was still there when making that sharp turn. So I spent $130 on nothing.

I took it back and they said that they'd probably have to replace the muffler brackets. However, I'm not entirely convinced by their diagnosis so I wanted to ask a few questions and get some advice here -

Any other information and suggestions would be really helpful. Thanks.

Check the rear stabilizer links. They are located between the lower control arm and the anti sway bar. They should look something like this: 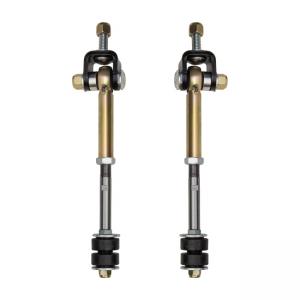 They can have ball and socket joints or rubber bushings. If the joints or bushing wear out, you'll get thumping or squeaking. They are hard to diagnose because they are under a lot of compression when the car is on the ground and under a lot of tension when the car's jacked or lifted up. You need to get the weight balanced so you can check for loose joints or bad bushings. When mine went bad, I had to remove one of the nuts holding them in so I could move it back and forth to see the bad bushings. Good luck

I used to work in automotive assembly plant trouble shooting problems, including squeaks and rattles. This one is wack.

The taillamp lens is made from acrylic. If the edge of the lamp is in slight contact with painted sheet metal and there is even the slightest movement of sheet metal you will hear an obnoxious creak from inside the passenger compartment.

The fix is to use a bit of felt / flock tape at the backside edge of the taillamp lens , or to add spacers so there is a gap between lens and painted sheet metal body of car.

One of the hints here is your issue occurs at rear right of vehicle. When you understand how complex automotive body sheet metal is fixtured (four way/ two way locator schema) all the variability in the build goes to right rear. (+/- fractions of millimeters)

Not the answer you're looking for? Browse other questions tagged ford noise mustang muffler diagnose or ask your own question.

4
2004 ford taurus - screeching sound when attempting to start the car
3
What is this noise from the front (tires or such)
6
Diagnosis on thumping noise from the front
13
How does condensed water get sent out of an exhaust system?
2
Rumbling noise on sharp left turns
0
Brakes give a metallic creaking sound
0
Scuffing Sound From Front Left Brakes After Repair Work