I scratched my rim against a curb. Will I still be able to drive long distances or should I get it fixed before I hit the long road?

I scratched my car’s wheel against a curb and I’m not sure whether to fix it immediately or if I can wait it out. I’m planning a road trip and I need to know if it’s safe to drive with a scratched rim. 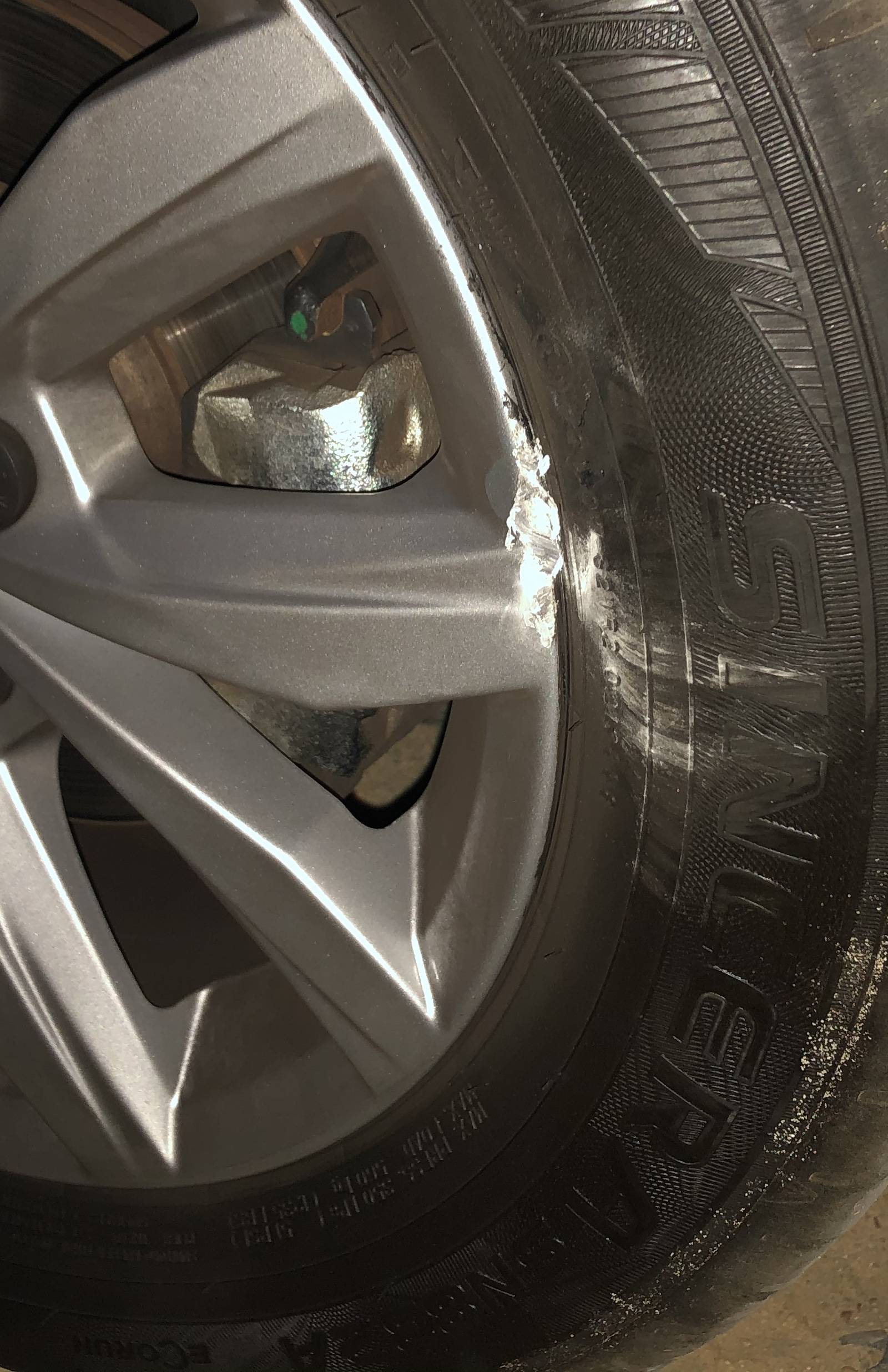 Fortunately that damage is mostly cosmetic. That style of wheel, where the spokes run out to end flush at the very rim of the wheel is a pretty stiff geometry, so you're unlikely to have deformed the ledge and face that the tire seats on and seals against. Wheels where the lip is projected out from where the spokes attach are far more prone to bending with an impact at that point.

I'd choose to grind away the displaced metal that's up against the tire, it'd be easiest to do this by letting the pressure out of the tire, so that it can be flexed away from the lip, pack some cardboard or similar behind the lip and go at it with a Dremel or similar until the edge is fairly rounded. Make sure there's no shavings left before you re-inflate. There's still the possibility that the wheel has suffered some distortion, and may have lost enough material to put it out of balance. I'd just check for any vibration, but taking it to get re-balanced might be worthwhile.

There doesn't seem to be any damage to the surface of the tire, and the direction of impact doesn't look to have pinched it in a way htat could damage the sidewall plies.

You are probably fine, it doesn't look very deep however that is a bad place to get a scratch since it can affect tire integrity. For nothing else but peace of mind on your road trip you should probably get it repaired or replaced. That can probably buff out. Many tire shops can have you in and out in 15 minutes.

Wheel looks OK, but that sharp edge should be ground down. If it were my car, I would try to get a small tool between the tire and the wheel and pull the very edge of the scraped area out just enough to get in there with a file and take the sharp edge off. If you don't have the tools, or don't feel comfortable with that, then take it to a shop that does tires and have them remove the tire and grind down the edge where the scrape is.

As the others said, the edge should be ground and the tire inspected closely for any cuts in the side-wall.

But, one more thing: You should get your wheel re-balanced. When you hit the curb, your rims can get warped a little and if the wheel is not probably balanced, you can get an unpleasant wobble and wear out your wheel bearing much faster.

Not the answer you're looking for? Browse other questions tagged tires wheels scratch or ask your own question.

3
Squeaky front wheel on 2007 Honda Fit
6
Tire sidewall damage near rim cosmetic?
0
Sidewall damage on run flats from curb. Do I need to replace the tire?
3
Side wall damage
0
Off road tyre and rim for Audi A3 quattro
0
Right drivers side tyre scraped curb, missing chunk - Honda Fit
0
Can I repair this rim by smoothing the edges out? Do I need to?
0
Rear wheel rim hot to touch grinding sound while driving and braking
0
How bad is riding with road tires off-road?
0
Rim damage from scraping kerb.. Is it only cosmetic or something more?Should I get it checked?