Why are these wires sticking out of battery terminal? 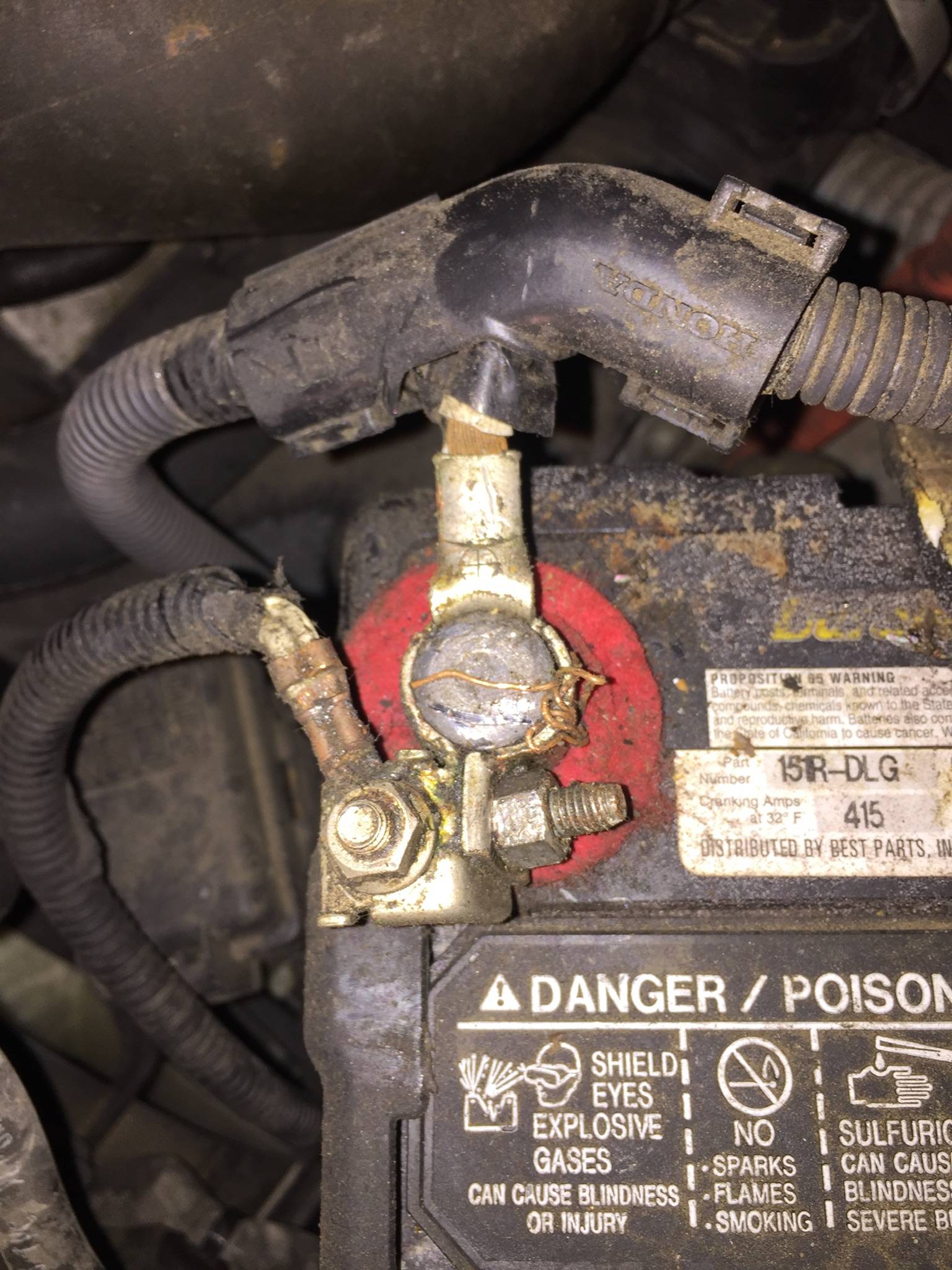 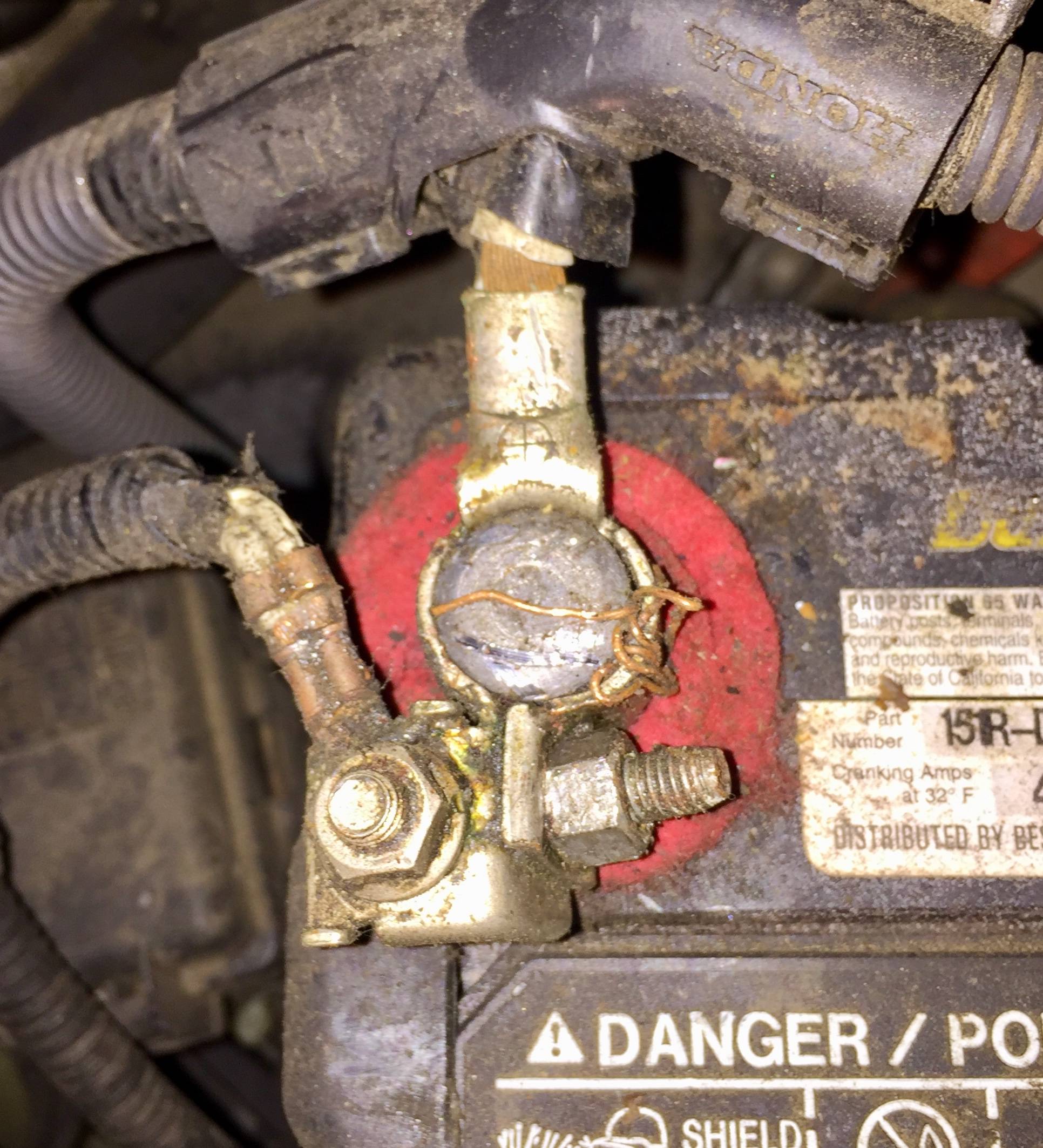 Could someone please explain why there are copper wires sticking out of the positive terminal on my battery? I’m trying to jump start it without success, and want to get it to an auto parts store to replace the battery. Do I need new battery cables too? Sadly, my dad is no longer around to teach me. Stacy

The main reason those would be sticking out of your battery post/terminal is because the terminal clamp has become too stretched. Someone put the copper wire in there to take up the slack of the clamp. Without them you'd lose connection and the battery would not provide the power to get the car started as well as the system having the ability to charge the battery. This is meant as a stop-gap measure. It works, but realistically the clamp should be replaced.

As far as the cables go, I'd suggest you get those changed. If you look at the main cable (at the 12 o'clock position in the image), the copper there looks lackluster, which means corrosion has set in. This means added resistance and less charging/starting ability.

The other answer could be that in the past someone connected an extra wire to feed some add-on device in a very poor manner. Instead of getting a ring connector crimped onto the wire or tapping into a connector on a fusebox they could 'simply' have stripped the end of the wire. loosened the clamp and stuffed the wire between the post and the clamp. And then when the extra wiring was subsequently removed, it was just broken off. It's not possible from your picture to tell if that is one strand of wire wound round the clamp or several strands, some of which are pushed down the side of the clamp and one folded across the top. Whichever it was is an indication of poor workmanship - either the clamp should have been replaced or the wire should have been connected in properly.

Whichever it is, it should not be there as it's substantially reducing the connection area between the lead battery post and the clamp. Be prepared when you replace the battery to replace the clamp as well, though given it's got a single wire crimped into the clamp that disappears into the wiring loom... probably the heavy wire to the starter... you'll probably have to get the specific Honda part from a dealer or parts store. You may be lucky, the clamp may be OK, it depends if it will tighten down onto the new battery's lead post.

The fact that the copper wire is there to bulk out space between the lug and the clamp shouldn't stop the car having jump leads and starting, as they will connect straight to the car wiring. But, as said already, the whole clamp could do with changing anyway. There's not much connecting area between it and the battery lug. When you connect jump leads try to find a metal part on the body or engine rather than connecting the negative clip to the battery lug. Connect that last, and disconnect first.

Some Honda Civics call for an R model battery. It has a duplicate battery model for other vehicle makes/models but some specifically call for a Battery model that's starts with R which is an identical battery with reverse terminals. When the wrong battery is selected in the battery manual catalog and is connected, it blows a five dollar battery fuse under the hood in the front of the fuse box in front of the relays. Once the battery fuse is replaced, to keep from blowing the fuse again, the customer has two options. The customer will either exchange the battery if he catches it, or turn the battery around, in which the terminals are different sizes, causing one clamp to have been stretched after being tightened with no way to reverse the terminals without replacing or rigging some kind of wire to fill the gap. These cars have very exposed ground wires normally held in by a small bolt so if you're still having trouble starting but the ignition is turning on, it could be the ignition switch, electrical problem or oxidized ground wire that runs from the black side of the battery terminal normally to a 10 mm bolt right in front of the battery. The simplest fix is to replace the bolt and make sure there is ample wire, twisted together to create a large enough current to allow the starter to fire. The starter can be tested with a decent piece of good insulated wire while the ignition is in the on position, touching the small connector to the bolt connector on the starter(using the wire, it should turn the engine), making sure not to get your fingers close to anything where the current can arch. It carries enough amps to stop your heart but I did it for months trying to find a work around, rain(used gloves) or shine. I would recommend having a certified mechanic do it for you , or don't ground yourself to anything. It also may attract unwanted attention.

4
'01 Jeep Cherokee - Check Gauges light & low battery gauge
8
Corrosion on battery, won't start, making clicking noise, won't charge
1
Hyundai XG350 - Positive or Negative Ground Battery?
6
Why did a failed jumpstart work?
0
Dead battery, reversed polarity on jump, won't turn over with correct polarity
2
Replacing Brakes and Having a Problem
1
Strange electrical issue with 2001 Civic
0
Can low battery cause car to cut out?
8
What are these hoses that are sticking out?