Should I not drive with this huge chipped rim? 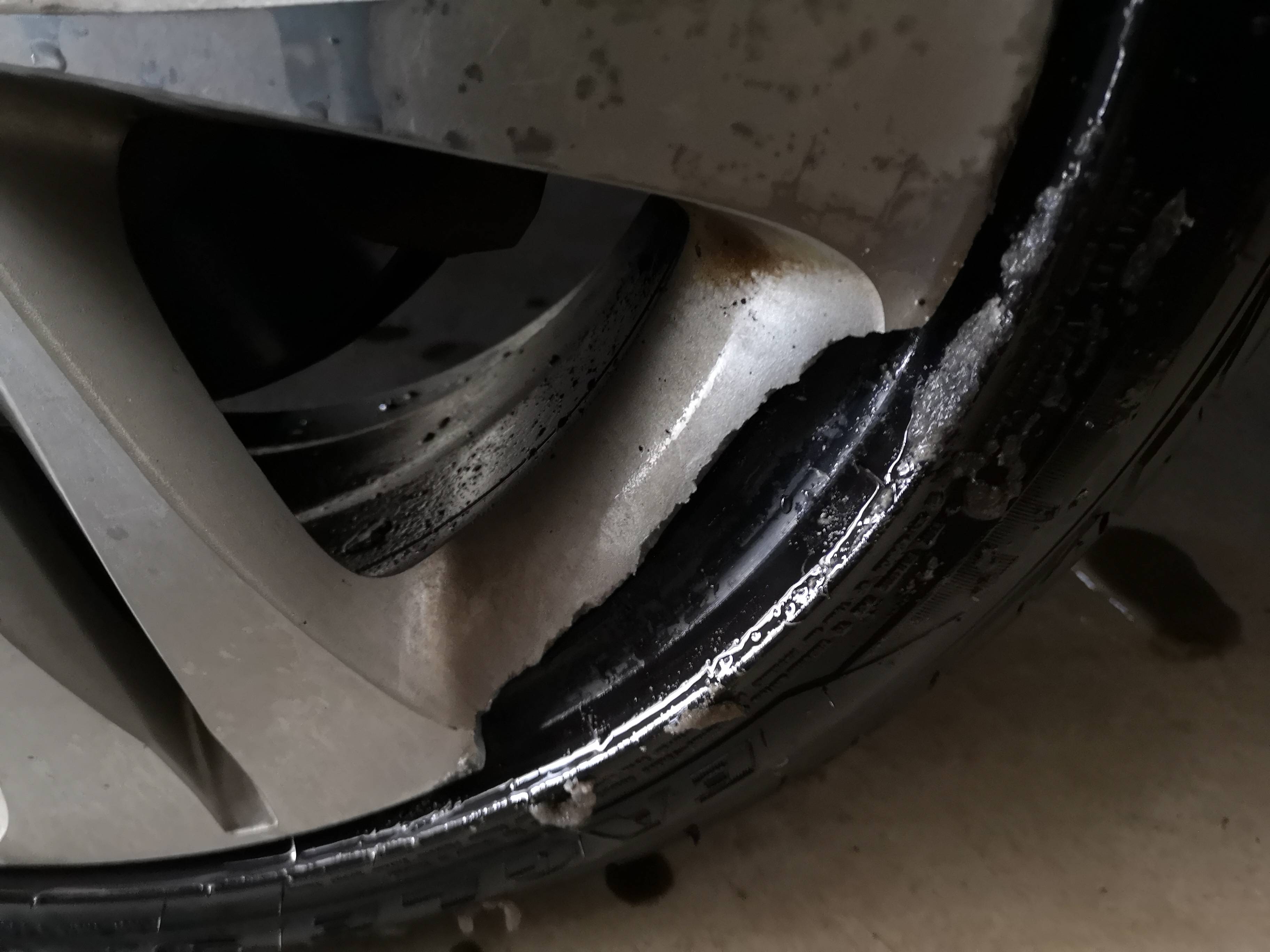 Slid while turning and hit a curb. I am pretty sure I shouldn't drive with this but wanted to get opinions.

Do NOT drive this at all.

Change the wheel before driving it again.

That can cause sudden loss of control if the bead shifts.

Well i am not sure this should be answered but in compliance with the site rules, DON'T. Also if i may ask back isn't your tire deflated?

The wheel is done, so you're better off just buying a spare.

You can buy matching OEM wheels online from a variety of web sites, and also through interchange amongst full-service scrap yards.

The wheel is made of aluminum and steel, and recycles nicely. Let the tire shop do it. If the tire is undamaged just have a tire shop transfer it to the new wheel.

Limping: Stay under 20 mph at all times. Expect a blowout!

Venturing out onto arterial roads should be kept to an absolute minimum, because you can't move fast enough to be safe -- a car going a dramatically different speed from everyone else creates a significant hazard to other drivers. If you have heavy commute hours, exploit them: for instance if I had to cross the Golden Gate Bridge I would do it in the thick of commute hour, where you'd be lucky to go 20 mph.

The freeway is out of the question.

A good way to find off-beat routes is to ask Google maps. One of the rows lets you select public transit routes, bicycle routes, walking routes, etc. You can browse those to see if they will put you on smaller roads. Many towns have a network of alternate smaller roads, and they designate them as official bike routes.

What's the deal with going so slow? Physics.

We're assuming there will be a blowout or wheel breakage, and moving so slow it's safe.

We're relying on one of the laws of physics, about kinetic energy. You have to spend energy to get your car moving, but once it is moving, it stores energy - it will coast for a distance, and you must use brakes to stop it. Right? That is kinetic energy.

The amount of kinetic energy decides how much mangulation will happen in a crash, how much forces will act on the car in a tire blowout, how much dynamic force acts on the wheel when you hit a bump, etc. It's impractical to move the car unless we can keep these forces VERY small.

Here is the formula for kinetic energy.

The squaring of velocity is what makes this possible. If you go 1/4 the speed, you have 1/16 the kinetic energy. Cars are designed for blowouts to be manageable by a competent driver at 80 mph. At 1/16 of that, they're so easy I have confidence anyone can do it.

At the low speed, things happen at proportionately lower speed (1/4 of 80 mph). But the main win is the massively lower kinetic energy, which does some things for us.

Why not just tow or use the spare tire, if a blowout is so certain? Tell you a secret, a blowout is rather unlikely at 20 mph. But we're gonna plan for the worst and hope for the best.

Jack it up (chock the wheels) install your spare wheel, Throw away the destroyed hubcap and look up "Wheel Repair" in your local yellow pages.

Yes, you should drive slowly, (not on the highway) and with the hazard lights on to the nearest wheel and tire shop and replace it.

Just kidding, you'd be safer putting a spare on, but if it holds air you could drive on it in an emergency.

Driving that at speed would be extremely dangerous due to increased risk of a blowout, which could send you into a telephone pole or oncoming traffic, or a pedestrian, roll the car etc.

Not the answer you're looking for? Browse other questions tagged tires wheels or ask your own question.

7
How to know if I need new tires?
2
Is it ok to drive with the tire scraped like this?
1
Hit a curb, took a chunk out of the tire. Replacement?
1
Tire damage needing replacement?
0
Do I need to repair my tires?
0
I scratched my rim against a curb. Will I still be able to drive long distances or should I get it fixed before I hit the long road?
0
Is it safe to drive on my damaged wheel?