I do apologize for the non much descriptive title, I'll try to work out a better title.

Yesterday my car all of a sudden stopped starting (namely I turned the key, the engine cranks that my car doesn't start). I'm not an expert but my only initial guesses were either the battery (but it's new, because I've changed recently... so no) or the spark plugs (which I've checked, they seem fine as well).

I took it to the mechanic and apparently they can't figure (at the moment) what the issue is, they mentioned that there's no power going to the engine and it has something to do with the immobilizer (but they're not sure of that either).

Apparently it's going to cost a lot of money to fix it, because and the investigation itself is going to be quite involved.

It's a second hand car, I bought it 4 years ago (a Peugeot 206). Mostly asking now if someone has some insight to share that I can use to have a discussion with my mechanic about whether or not is worth even attempting to fix it.

I might be able to give you more info if you ask.

Update There's a minor thing I've actually done now that I think about it...which is changing the case of my key fob.

Is it possible there's any relationship between this and my car not starting?

I've also found this forum where the issue seems very similar to mine.

If this happened right after you re-cased your key then the most likely possibility is that you have damaged the transponders antenna on the pcb. They are very fragile. Generally the keyless entry portion is separate so it may still be working even tho the transponder is not.

I'm not all that familiar with Peugeot's since we do not have them in the states but I do know the style of key and believe its similar to the one below. If you have any local locksmith shops in your area you can take them your key and ask them to check to see if it still has a transponder signal.The antenna are easy to replace if its the problem. Its possible the eerprom on the key got corrupt as well but its rare so I would only worry about that IF they key sends signal and your car is confirmed to have immobilizer faults stored. 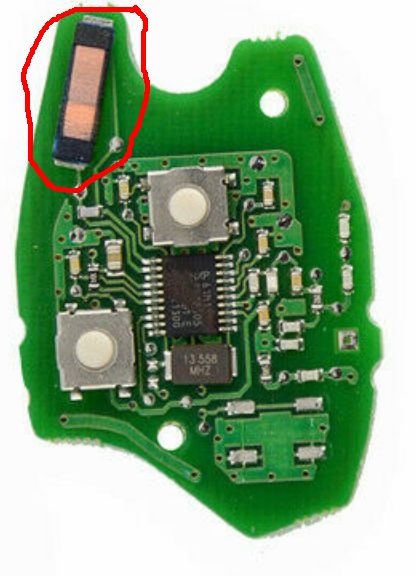 Keys need to be paired to the car... if you lost the pairing info, by removing the key fob batteries for example then you nee to re-pair them for the keys to be recognised...

Update: this is the procedure to re-pair keys for a Jaguar X-Type (and I have one so I also have the manual...)

Pay special attention to point 6, every fob you have must be programmed at the same time although you only need to use one key in ignition.

This is not a universal procedure for every car, some will need the "dealer computer" to get re-paired, others have a method that does not require a computer. Hope this is clear for those who did not follow...

Not the answer you're looking for? Browse other questions tagged starting peugeot cranks-wont-run immobilizer peugeot-206 or ask your own question.

2
Car engine starts only for a fraction of a second and doesn't anymore?
7
How can I remove a stuck cigarette lighter?
4
Blew the radiator cap and now can't start the car, what could it be?
3
Is it bad to always kick start my car as I always park it on a slope
0
What happen when the key is half-turned (KL30?)
5
2008 Honda Accord turns over but wont start
0
2016 CRV brake pedal occasionally won't depress to start the car