Recently picked up a '93 Eurovan Automatic. It has had a couple of issues since I've owned it. Currently driving across the US after being told the van was mechanically alright.

There are a couple of issues at the moment.

Issue 3 has occurred before. Just after buying the van we had the same issue. 2 separate mechanics have told us it was the coolant temperature sensor allowing the van to overheat. Both mechanics replaced the sensor and a coolant flush/replacement was done too. The van does get quite hot while driving but we have never had the temperature warning light come on (lights up briefly after turning key to on position, never seen it lit outside of this). The temperature gauge doesn't work (neither does the fuel gauge), it sits at 1/4 most of the time (when the fuel gauge sits at empty) and then sometimes rises up to near max. I was told this isn't an issue. Is the temperature warning light connected to the dash gauge? The spark plugs and wires as well as the fuel and air filters have also been replaced recently.

Any help at all would be appreciated tons, especially as mechanics have failed to diagnose the issue and money has been spent.

Ok, youâ€™ve got a few (very well written) questions, so I will try to answer the ones which I am able to.

Based on the fact that the stalling is prevented/reduced by pressing the accelerator or by opening the hood, it sounds like the engine may not be getting enough air.

(New addition to my answer below)

Regarding the accelerator pedal stopping working: I have a '92 Ford Ranger which would experience a similar problem. Driving along, the gas pedal would "stop working", and the RPMs would drop to the idle rate. It was as if someone cut the throttle cable. It would typically last for less than 30 seconds. It turned out being a problem with my MAF (Mass Air Flow) sensor. The MAF would intermittently stop working, and the engine would think that the throttle was closed (because the MAF was not sensing any airflow). Unplugging the MAF fixed the problem.

If you unplug the MAF, the check engine light will probably turn on, and your gas mileage may drop slightly. This is because the engine switches to a "default fuel mixture", which is typically slightly richer than necessary.

Did the mechanics specifically say they replaced the coolant temperature sensor? In your case, I do not think this is causing any problems with overheating.

The coolant temp sensor is an electrical thermometer that sends temp readings to the gauge on the dashboard, and in some cases to the carâ€™s computer.

If you look at page 9 of the wiring diagram below, it looks to me like the engine coolant temp sensor is connected to the coolant temp gauge (instr clstr). I marked both in yellow. 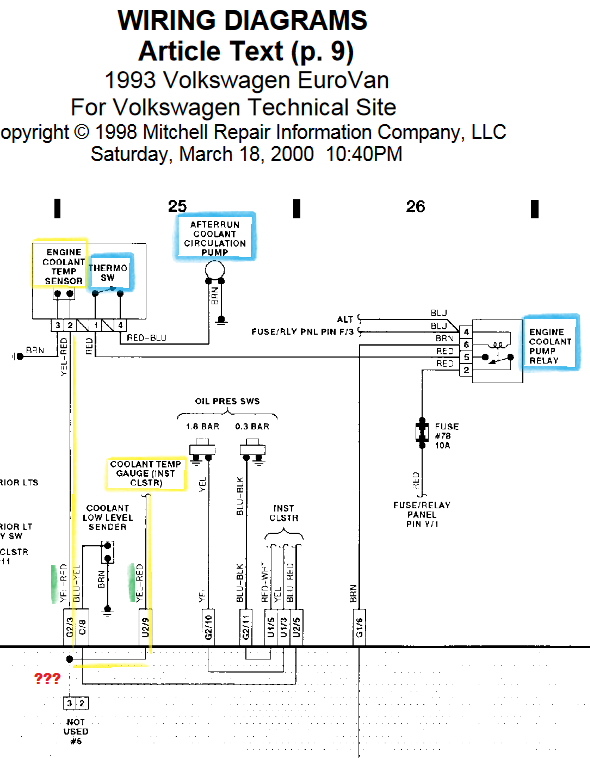 In your case, I think the mechanics should have checked the thermostat. It is a mechanical device which opens and allows coolant to flow from the engine to the radiator when the coolant gets hot. In many cases when engines are overheating, it is simply because the thermostat is stuck in the closed position, and is not allowing coolant out of the engine into the radiator.

It is fairly easy to check if the thermostat is working. When the engine is fully warmed up, feel the hose which connects to the top of your radiator. It should feel very hot, because it is carrying the hot coolant out of the engine. If you squeeze it, it should feel like it is full of coolant. If it feels empty, that means that only a small volume of coolant is leaving the engine.

Not the answer you're looking for? Browse other questions tagged vw overheating idle diagnose accelerator or ask your own question.

25
Symptoms of Lean or Rich carb settings on a motorcycle

1
My 2006 Jetta is making a loud sound and sometimes stalling when I try to accelerate
6
RPMs jump to 2500 when clutch is disengaged or transmission put in neutral
5
Is it bad to idle the car for 5 min or restarting the car?
1
Issue with car rev'ing and brake!
4
2005 WRX Idle RPM Increasing in Traffic
1
Overheats only when running at low RPM
4
Water temperature randomly drops while car is in motion (VW Golf Mk6)
2
2004 Honda Civic OverHeating (Lots of Details and Pics to Help Diagnose)