How does compression tests work inside of an engine?

The pressure gauge has a one way valve in it so that it does not follow the pressure in the cylinder at all times - it is designed to record the maximum pressure over several cycles of the engine.

The pressure gauge used for this test also has a button on the side (back or connecting tube) to release the pressure. This also allows for the reading to be read easily - as trying to read a jumping needle is difficult...

Edit as this is useful info :

On the compression stroke the pressure increases as the piston moves up the bore which reduces the available volume for the fixed amount of air. So if you think about Boyles' and Charles' Laws for gases pV = nRT or pVγ = constant... The spark ignition engines rely on the increase of not only the pressure but the increase in temperature as it is the temperature that causes the ignition of the injected fuel.

Here is an image of a compression tester, has an extension adapter connected, the total length of the tube is good as it keeps your fingers away from rotating parts (always a good thing) and you can see the button on the left on the steel hexagon below the gauge. 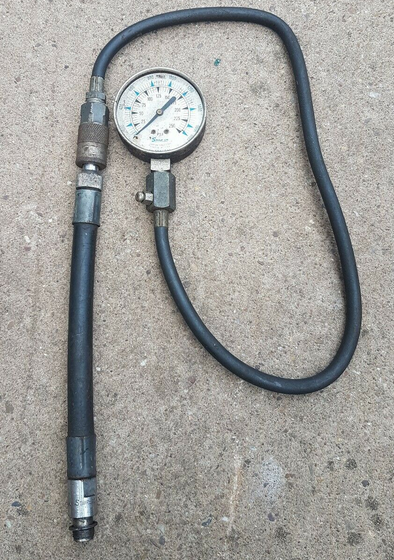 The maximum pressure obtained inside the cylinder is achieved at top dead centre (when the piston is at the top of the stroke). There is a very small volume of gas in the cylinder at this point.

When you add a compression tester as in the one in Mike's answer (which probably has a larger volume than most I have seen), you are likely doubling the volume at TDC. This will probably lead to half the pressure that you would get without the tester connected on the first compression stroke.

On the next compression stroke, you have again twice the volume, but half of the volume is at half expected maximum pressure. This time the pressure increases further.

What you see is over several compression strokes, twice the normal volume is pumped to the normal compression pressure. This is why you see the pressure increasing in pulses while cranking until it eventually stabilizes at a maximum pressure. 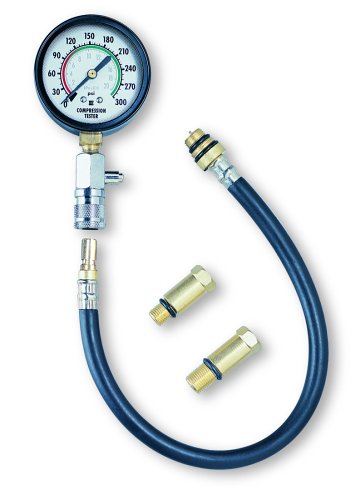 what you need to look into is a 4stroke engine and how it works ! I could write an essay on it since there is so much to talk about but it is simple as 1st troke -Intake 2nd compression 3rd power 4th exhaust

Not the answer you're looking for? Browse other questions tagged compression or ask your own question.