Subaru automotive wiring and fuses - 0.3mm2 wires with 15A fuses?

A factory Subaru Impreza 2006 has 0.3mm2 ECU/ECM wires protected by 15A fuses while the service manual itself states that 0.3mm2 has allowed currency rating of 7A, that is 2 times lower than the fuse that is supposed to protect the wire. I would expect the fuse to be the weakest link in the circuit.

How does it make sense? 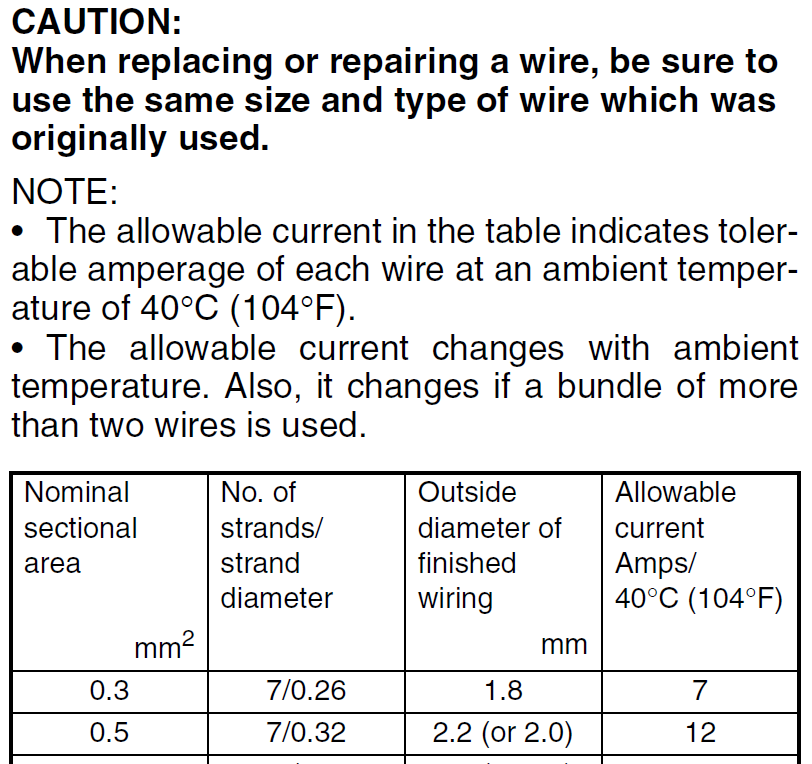 "Allowable current" is not the same as "'This will start a fire' current".

While households effectively do use this standard, it is not commonly used elsewhere. As in this case, a fairly common standard is to fuse circuits for twice the nominal maximum. Fuses and circuit breakers are (outside of the very safety-conscious world of building codes) intended to protect against relatively short-term overloads, especially those caused by insulation failure and accidental short-circuits. Note that car manufacturers do not, in general, have to deal with random variations in loads in excess of the ratings. The loads for each circuit are specified and pretty well fixed. It's not like a family overloading a wall plug by adding Christmas tree lights or a space heater.

Allowable current is better thought of as "Operating maximum current". The 7 amp limit is applied to the specs for the loads to be attached to the circuit. If the loads malfunction and draw (for instance) 10 amps, this is unlikely to cause an immediate catastrophe. The wires will get hot, and the insulation will start to degrade more rapidly than is normal, but this is not generally something which is protected against.