I have a 2011 Nissan X-trail, 2.0 Diesel. Bought it several months ago and noticed that the oil pan is really rusty.

Here's how it looks: 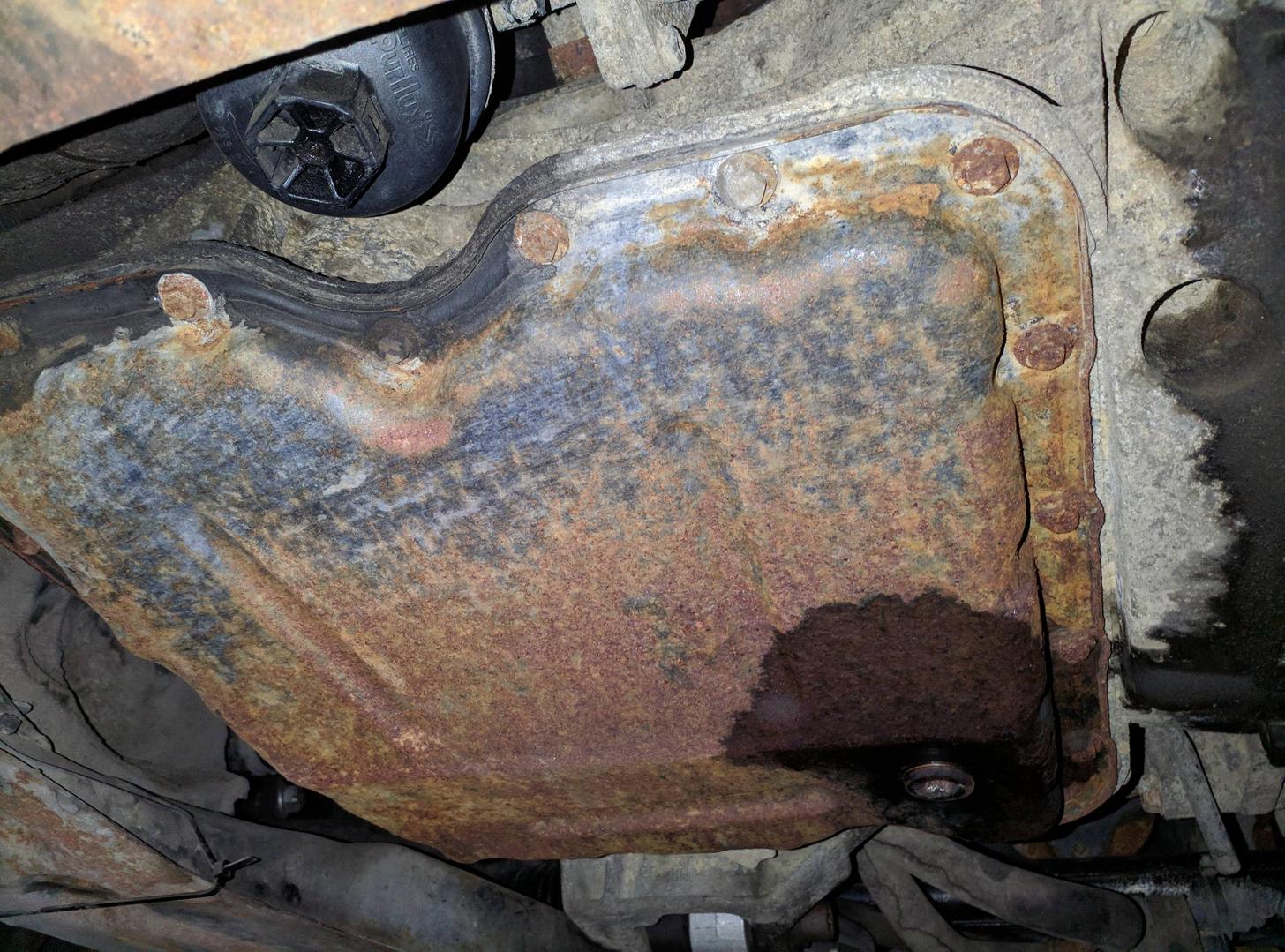 I am thinking of brushing the rust out and apply a coating of enamel/paint which says it seals and prevents rust. But I don't know how deep the rust goes.

I could try and replace the pan with the next oil change, since the part costs about 50-60 USD. But I am worried about those rusty bolts. Since there are 20 of them, some of them will surely snap. And I don't know if the mechanic will manage to extract them from the block.

What do you advise? Thanks

If the rust is only superficial, I'd go for the sloppy solution and use some rust converter. Reason: You can do it on-site with the pan attached. Should that not work for some reason you still can change the oil pan later, otherwise you are set for the next years.

Should you try to do it you ought to degrease the pan first (I notice there is a thick oil spot around the plug, so do it after the next oil change, replacing the gasket/washer)

The work gets better if brush off the thickest parts of the rust, wear eye protection and a filter mask.

The pan looks rusty but it's not so critical.

If you have a spare time and you like to fix things you can remove the pan and clean it properly.

First it's better to clean the rust from the bolts with a metal brush or a wire wheel cap brush and a drill. After such cleaning you won't have any problems with bolts, because they are rusted only from the outside. 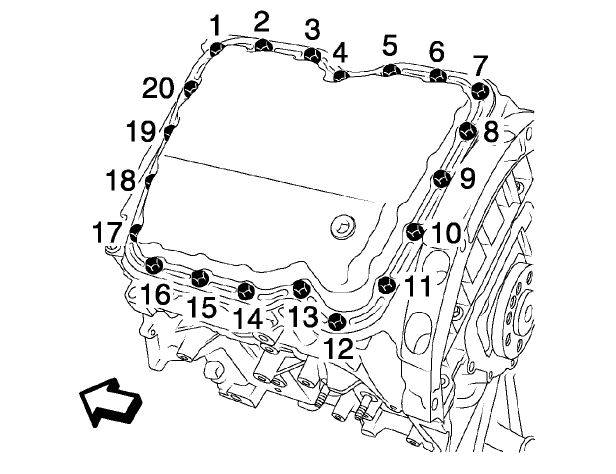 Since in Nissan X-trail doesn't have an oil pan gasket, the oil pan fixed in placed with a sealant. Use a knife to cut through the sealant to remove the oil pan.

Then apply a new sealant (use a good one which can handle the engine temp) as shown: 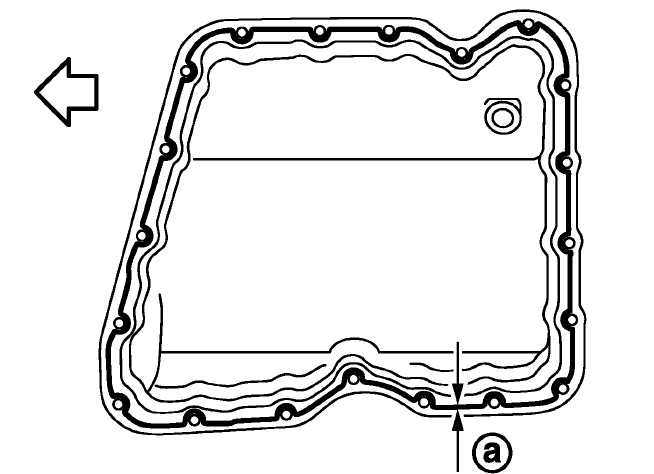 When done wait 5 mins and install the pan.

Realistically, you shouldn't have to replace any of it. If it were me, I don't think I'd be overly worried about it ... wouldn't bother me a bit.

However, you are not me, so to answer your question ... you don't need to replace it to get it cleaned up. You'd just need to pull the pan down, clean the rust off of it, then put it all back together. You'd need a replacement gasket for the pan (between the pan and the block) as far as parts go. A Scotchbrite pad, a bottle of acetone, some rags, a spray can (rattle can) of engine enamel primer, & a spray can of black engine enamel.

Take it down, de-rustify it, clean it up, prime it, then paint. I'd have no fear of the bolts, as just the heads (not the threads) which are rusty ... you should be able to pull those off without an issue. You can clean the heads up on those, stick the threaded section through some card board and paint them the same time you're painting the pan (with primer, then paint). Really, it's just that easy. When replacing the bolts, ensure you're not over tightening them ... just past snug (probably about 15-18 lb-ft of torque, as a guess). You want to get them even, though, so as to not warp your freshly painted oil pan. Also, while you're at it, if there's a gasket on the drain plug, you might want to get a replacement for it as well ... looks like it might be seeping a bit.

I would take it off clean off the surface rust and see if it flakes away. Rust like that is cancerous and without removing and repainting it the rust will continue to spread from the inside out.

It isn't leaking now? However one small rock will crack a rusted pan before it cracks a unrusted pan. Rust will flake off and if there is enough will put a hole through the pan.

Brushed the rust off, cleaned it and applied paint. The rust seemed superficial.

Here's how it looks now: 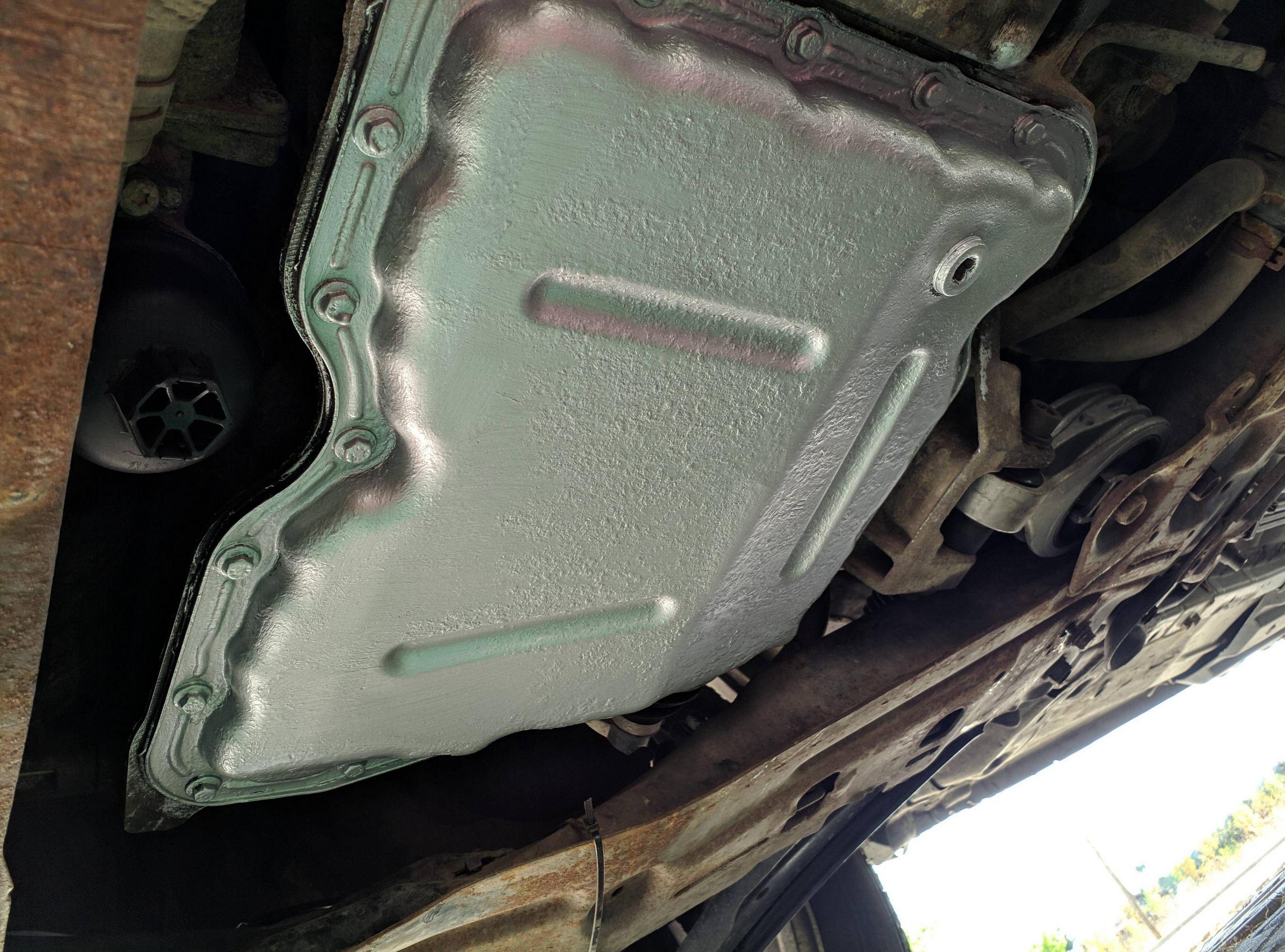 Not the answer you're looking for? Browse other questions tagged nissan rust oil-pan x-trail or ask your own question.

13
Oil change with front wheels on ramps?
7
Oil pan threads stripped?
10
What material should I look for in an oil drain plug gasket?
6
How to clean engine when oil is contaminated with metal shards?
9
Roof paint peeling badly, with rust -- what to do?
6
How to remove oil-pan when only sealant is used
6
JB Welding a Stripped Oil Pan
3
oil pan removal
2
Rusty wheel hubs
0
Temporary oil pan leak fix?