I got 45 ah battery in my car full charged 12.6v and has GREEN colour on the too indicator. It was left unused recently for 2 days, and next day, I checked the battery which gives 12.4v, however, the status indicator shows WHITE colour as picture attached herewith. No hard staring issues. I used the car and eventually it attains 12.6 volt but the WHITE COLOR STILL EXISTS?!!

As per the battery, GREEN is FULLY charged, WHITE is NEEDS CHARGING, RED is SERVICING.

Now, my point is why WHITE COLOUR is showing up, at the same time 12.6 v reads on multimeter??

HOW TO GET BACK GREEN COLOR UNDER 12.6 VOLT. 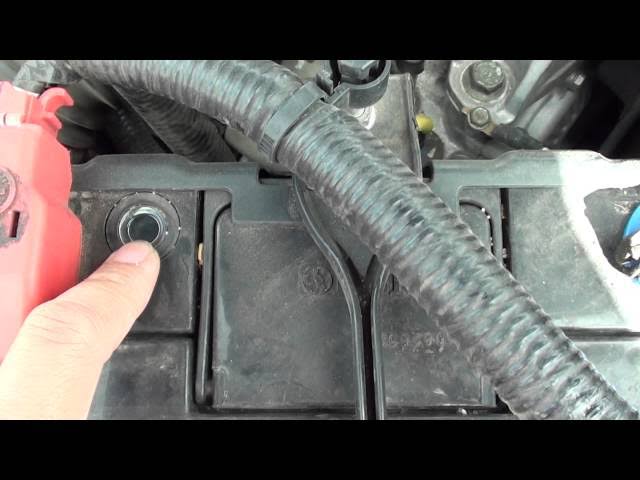 This indicator is almost pointless. The only reason it exists is that is increases sales of new batteries.

White (red on some brands): electrolyte is low. May need topping up with deionized water (but the battery is likely marketed as maintenance-free and hard to open, so no topping up possible).

The green color may be a matter of mixing the electrolyte. A fully charged battery turn green only when shaked.

The level somewhat depends on the temperature, a hot battery may have somewhat higher level.

Whatever the indicator shows, it is immersed in one cell, others (esp. in older battery) may be in another state.

The voltage of the battery (with no engine running) is pointless as well.

12.1..13.0 - battery MAYBE in some state of charge other than completely depleted.

Above 13.1V - battery in some rare failure mode with voltage above normal, no good behavior expected.

One cannot deduce a state of charge of a lead-acid battery by its open circuit voltage, other than to distinguish between completely depleted and somewhat charged.

If the battery performs well, leave it alone. If it doesn't - replace it.