I have diagnosed 2004 Acura TL with a multimeter a parasitic drain on my car and narrowed it down to the interior light circuit. Before I started pulling fuses to see which circuit was the culprit, when I hooked up the multimeter to the battery to see what the draw was, it registers 600 milliamps, then less than 5 seconds later, it goes down to 200-300 milliamps, stays there for about 15-20 seconds roughly, then it spikes back up to 600. I watched this occur for about 5 minutes. The pattern repeats over and over, never changing. More specifically, when it comes down from the spike, after approximately 5 seconds, it goes to approximately 300 milliamps and holds there for about 1-2 seconds, then it goes back down to around 200, then repeats the same thing, spiking about 15 seconds later to 600, etc.

I started pulling fuses under the dash and the multimeter hit 20-40 milliamps when I pulled the interior light fuse.

I checked the trunk light and it is off with the trunk closed and there are no other internal lights on in the car. any ideas of what could be causing this consistent spike in this circuit? Thanks in advance!

Here's the breakdown of the power distribution from Fuse #6.

You have a roof console unit, keyless receiver unit (George may be on to something), handsfree control unit, and some other gizmos which might be "smart" and cause the kind of pulsating timed loads you describe.

An active key in the vicinity might cause such a thing. The key is "waking up" the car in anticipation of being opened and/or started.

Hopefully this diagram gives you a place to start looking: 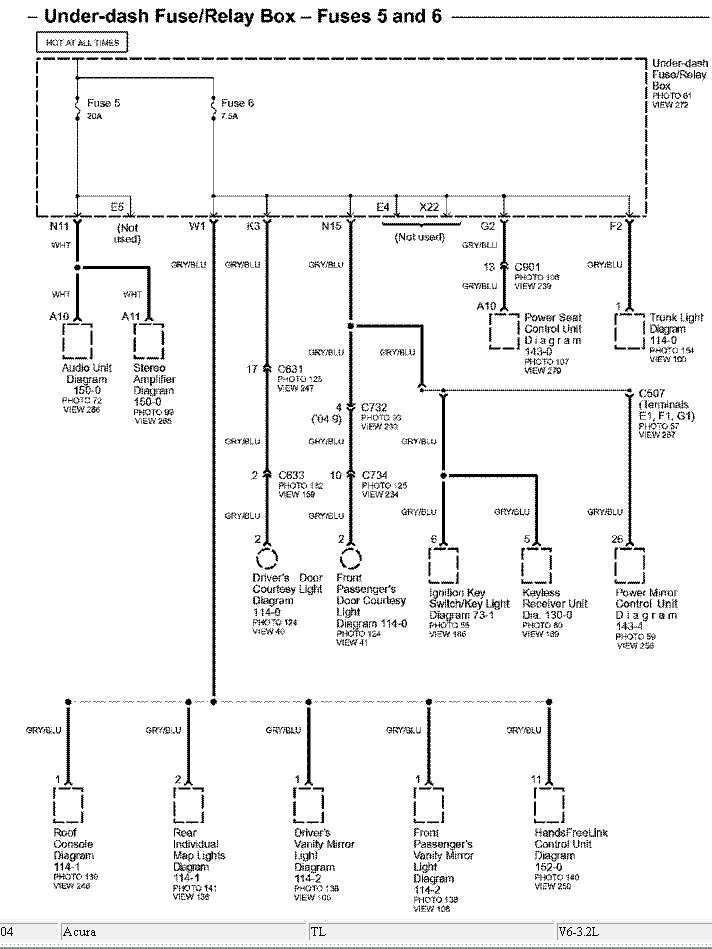 Not the answer you're looking for? Browse other questions tagged acura power-loss tl or ask your own question.

7
Car wont start unless I use jumper cables but battery is fine
2
Engine makes tapping/knocking noise all the time, won't rev correctly and has no power