I performed a block test recently to diagnose a problem I'm having. The liquid stayed blue, but I want to clarify I have done this right. The purpose of the test was to see if I could prove a head gasket failure. 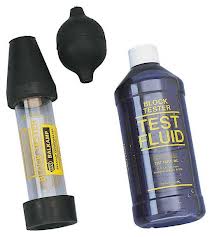 After removing some of the coolant using a siphon tool, and placing it in the coolant storage area of the vehicle, I started the engine and tried to test, the coolant level rose and I had to remove more coolant again, but only once.

Then I used fresh test fluid, I placed the test unit over the radiator to create the air-tight seal, and then let the engine run awhile, then I used the bulb to suck air through the test fluid.

The instructions say to do it for 2 minutes. What happened with me was that I apparently sucked out air until there was a negative air pressure, and no more air could be sucked out using that bulb.

So, I did the test once sucking as much air as possible in a short time, and after that, I did it again and paced myself so I could steadily do it for 1½ minutes. I was careful not to let any 'fresh' air into the tube or the radiator. It refused to turn green or yellow.

I did test the fluid itself. The same blue fluid turned yellow when exposed to the exhaust.

And of course I welcome additional relevant information such as how this varies between various vehicles, a summary on how to ensure a good test and/or the limits of what this test could prove or disprove.

I would say that if the overflow tank only has a small hose from the over pressure nipple on radiator right under cap then that is normal and you should put the tester right on the radiator cap mouth, as the overflow isn't a reservoir and won't be getting circulation from coolant system until the cap is over pressurized. As opposed to a reservoir or expansion tank that has a (usually at least 1/2"id) feed hose to radiator.

I had struggled with one of these block tests myself where the negative pressure in the void I created in the radiator filler neck eventually created a vacuum that drew the coolant into my tester. I had the two chamber tester from UView so I could see that I was contaminating the test. I later hooked up a no spill funnel to the radiator and with its transparent bucket I could see bubbles winding up through the coolant as we revved the engine. The bubbles were about the size of a marble, probably one every revving of the engine with some smaller ones following it.

I've been hoping to rig up a means to trap and accumulate those bubbles that come too few and far between in a short period of time, where once accumulated to a sufficient volume only then could I draw that collected air up into the block tester. I think it would be a good addition to the no spill funnel setup to close its top so you can see the bubbles being emanated, collected, and trapped to later be drawn into block test device so I know for sure I'm testing air obtained from the radiator and not ambient air.

I feel like I wasn't confident enough of the combustion gases in the block were of a sufficient volume for a small head gasket leak that we suspected. Maybe you can rig up something like I described. The problem with this setup I would imagine would come from the rising fluid level that follows temperature increases. You'd need a way to manage the fluid being drawn up while not losing any bubbles you have coming up from the radiator neck. I can envision some kind of cock-stop valve where you can open and close a little air reservoir and disconnect that assembly to deal with the rising fluid levels, to either remove the extra fluid or let it settle back down into the radiator or whatever makes sense.

Not the answer you're looking for? Browse other questions tagged leak gmc testing head-gasket or ask your own question.