Can I rotate a camshaft backwards on a Toyota DOHC engine if no timing belt is installed?

I recently had to change the water pump on my 2002 toyota sienna. Since I was in there I also changed the timing belt. I've done this before on other Japanese cars, but this one involved taking off the camshaft sprockets to get the backplate off so I could remove the water pump.

I put a line of white paint on each of the timing marks so I could see them better, one for each of the camshafts and one for the crankshaft. I put everything back together and it seemed to run fine for about an hour, then I threw a CEL code: P1346 for the camshaft position sensor bank 1. This is what I found online, but my scanner seemed to indicate a bad sensor.

Bank 1 is the hard to reach one I might add. So I replaced the camshaft position sensor and again it ran without codes for about an hour or less and the same code reappeared again.

So maybe while I thinking it was lined up on that camshaft sprocket when it may have been slightly off. It was very hard to see and I had to use a telescopic mirror to line it up. However, when I did take that sprocket off originally, it rotated a quarter turn when the timing belt was off. I've always heard never rotate the engine backwards, so on that camshaft sprocket only, again with the belt off, I did one full revolution and again, thought it was lined up perfectly. I also thought that with the timing belt off, you can rotate the camshafts independently without issue, if you get them lined up to the proper timing marks when you are done. Is this true?

Another item, when the engine is running it feels like it's slightly off. Not sure how to describe it, but it doesn't seem as smooth, even though the power is still there and it seems to run okay.

Something worth mentioning is that I drove it about 2 weeks like this and threee times now, the CEL turned off and then came back again after about an hour or less of driving, making me think the camshaft position sensor was bad and just going out slowly.

Sorry for the long discussion, but it's important I explain the details. My main question is, could rotating the camshaft on bank 1 be the issue. Stated another way could the camshaft timing be off by moving the camshaft 1 full revolution with the belt off?

A youtube video for this same car and timing belt replacement said no, if the marks are all lined up, that is all you need to be concerned with. Also, if that is the issue, do I take off the timing belt and rotate it backwards to fix it?**

Obviously when I get things apart I can check the timing marks and that alone may be it, but if not, I'd like to get more information on it.

I did find out the answer to one of my questions here: Have I caused engine damage by cranking it backwards?

Further Development: I took the 7 hours rework and redid the timing belt as bank 1 camshaft was off by one sprocket or two. Due to the location, I really needed a straight edge to make sure it was lined properly, rather than trying to just eyeball it. So now I know it's lined up correctly. I also rotated that camshaft sprocket counter-clockwise one revolution, just to put it back where it was before, but I don't think that mattered.

More Information: Since it's been fixed I noticed that the idle is slightly smoother, but not much and it's been running fine. However, the P1346 code returned today. Since I replaced the camshaft position sensor, there doesn't seem to be any wiring issues, that should leave the ECM as the ultimate issue as Paulster2 indicated. I do have a scanner that can do freeze frames to diagnose the malfunction further, so I'll try that next.

Still more information: I still have this issue. I replaced the oil and filter, OCV (oil control valves) as that sometimes is the issue I've found, bank 1 CPS (camshaft position sensor), but after 3 to 6 hours of driving the CEL consistently returns after things get reset from removing the negative battery cable to do the work. Actually the code stays as I can see it in the scanner after a reset, but the CEL light doesn't come on immediately, which I can't explain. The car also seems to run fine, but I do notice sometimes it idles at 850 RPM and sometimes 625-650 RPM, but I don't know if that is new or has always done this.

So, my mechanic said to replace the timing belt tensioner, which I didn't do, realign the belt for a 3rd time and see if that fixes it as he is convinced the timing is still off. I do have the freeze frame data that I don't know how to interpret yet and I'm going to hook up a vacuum gauge as I've read that will show if the timing is off.

Final Result: My mechanic thought it was the timing was still off after talking to me over the phone, and that was the issue!

I checked the timing belt again and it was again off by one camshaft sprocket.

The Problem: These were these issues:

Below is a picture of a feeler gauge for illustration: 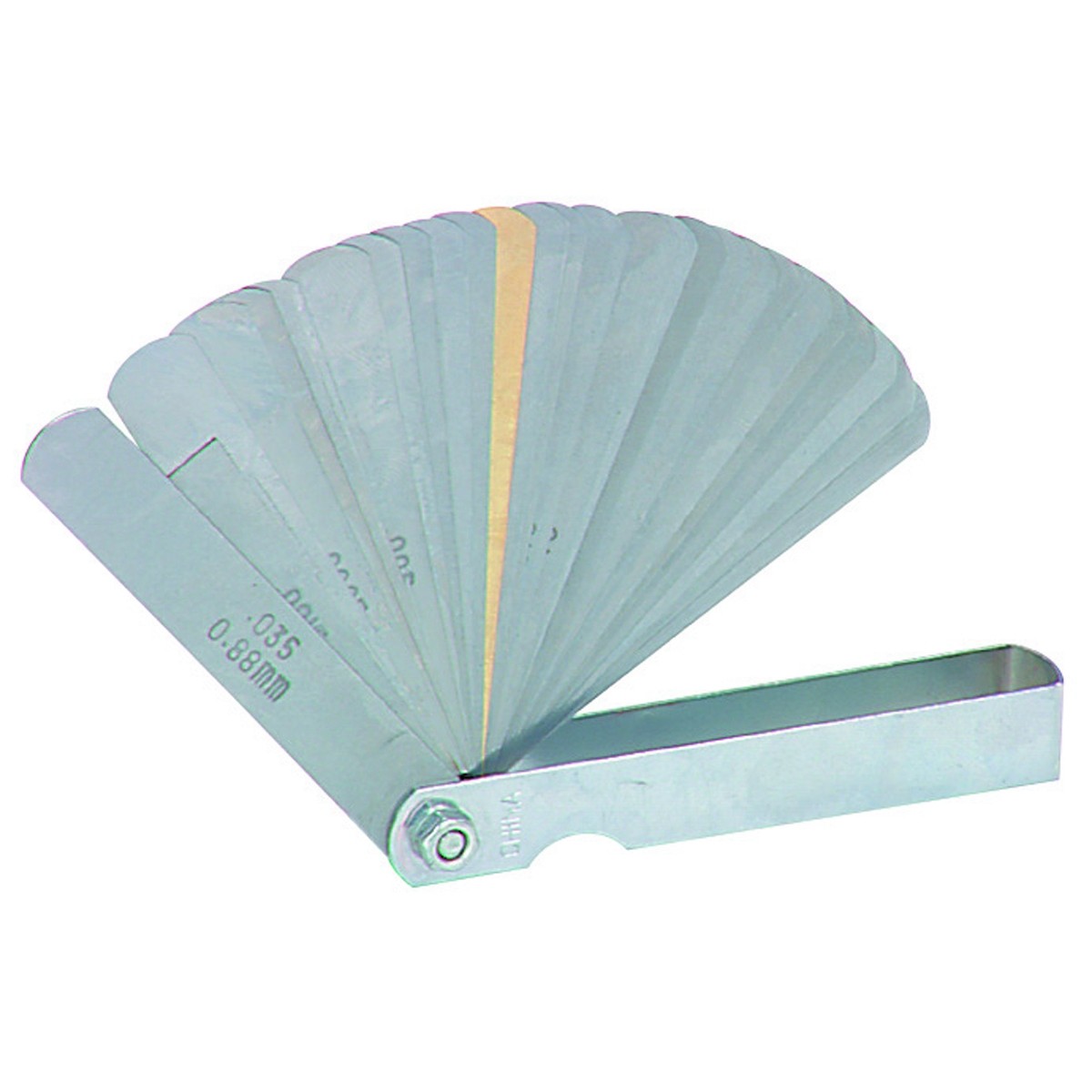 Note: I'm still getting a P1346 code, but it didn't show up for almost a week. Then it went away for a few days, came back, then it went away again. It's been doing that off and on, so something else is going on as I've seen this code before on other cars and it stays on until it's fixed, with no re-occurrences.

The engine runs great, so I'm at a loss as to why it returned? I'm posting it so I don't mislead anyone, but I'm convinced I fixed the timing issue. If it wasn't I would think the CEL wouldn't turn off, not on for a day or so and then off for 4 or 5. There were multiple electrical issues with the car, which could explain the issue, so I sold it.

You can rotate cams on a non-interference engine in any direction, all you want. However, in general I'd suggest it's best to only rotate only in the natural engine direction.

If you are off by one tooth, backing up one tooth on a cam is not going to get you into "interference" territory.

I always crank the engine over by hand several revolutions in the natural direction and then verify my timing marks are still correct. This assumes the "grenade pin" is pulled on the tensioner and the timing belt is operating under the correct tension.

In general, it's a risk to rotate a cam in any direction more than a few dozen degrees unless you are absolutely certain it's a non-interference engine, or you have verified that all pistons in that cylinder bank are nowhere near TDC.

In your case, I believe the 3.0 V6 in your Sienna is non-interference.

Also, if you find you are indeed advanced by a tooth on that cam due to valve spring pressure (and you don't own cam locking tools), you can rotate the crank forward about 20 degrees, mark the belt to sprocket relationship everywhere, and retard that cam one tooth without the hassle of the valve spring(s) advancing the cam. Always follow with 3-4 full crank revolutions by hand (with full belt tension) and verification that all timing marks are correct.

Once you are certain the camshaft timing is correct, the next thing to look at is the VVT oil control solenoid. (Since you have already replaced the camshaft position sensor.)

You can pull this fairly easily (it's under the plastic cover; just be careful not to damage the o-ring seals), and apply 12 volts to see if it is moving properly and fully. Removal of the 12 volts should allow it to spring back fully. While it's off the vehicle, flush out the internals with some solvent such as carb cleaner.

It's possible some debris got into the valve plunger area, or it's just has some sticky dead bugs and dreck in there. It only has two positions, and should operate smoothly and forcefully. If it isn't operating fully, or not at all, you need to replace this actuator.

I tend to doubt the ECU has gotten damaged as a result of a timing belt change, but it's possible. Instead, my money would be some yuck or stickyness that dropped into the oil passages during the belt replacement procedure.

Keep in mind that this VVT solenoid is only a servo, and is unregulated. The ECU applies voltage at a certain RPM to shift valve timing using oil pressure. The ECU has zero knowledge if the solenoid/oil pressure is working properly, other than a disparity between where the cam is according to the sensor, and where the ECU thinks it should be. If it doesn't make sense, it throws a P1346 for Bank 1.

Honestly, the P1346 description is a bit misleading. It implies that the fault begins and ends with the sensor. It does not take into account that the cam could be "out-of-time" due to improper cam advancement from the VVT solenoid and oil pressure. A more descriptive description might be P1346: VVT System Failure Bank 1.

Not the answer you're looking for? Browse other questions tagged toyota camshaft cam-timing or ask your own question.

6
Have I caused engine damage by cranking it backwards?