I've got a boat engine which will not start. The engine was factory refurbished last year, so I do not expect wear and tear to cause the issue.

I do not see sparks on the plugs. So I'm trying to test the coil. The resistance measurements I get from my multimeter is very much aligned with the specs of the coil.

To see if the coil can generate a spark, I'v held the primary wire from the coil and held it towards the engine. I do not see a spark when I do that.

Am I doing it right? That is, is this a usable way to check if the coil works? 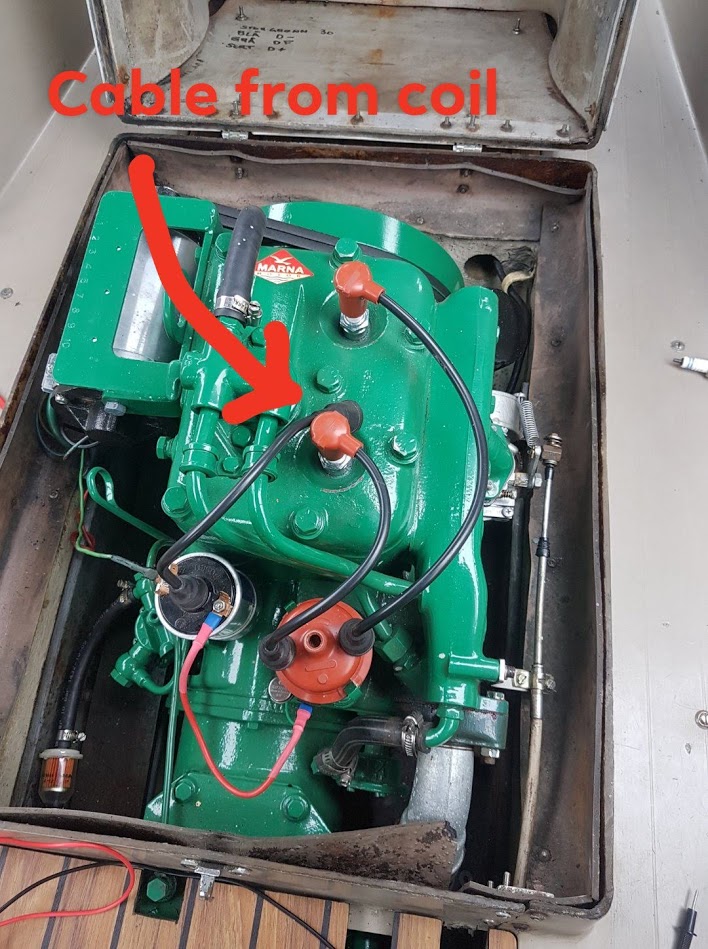 The SE app throws an error when I try to inline an image in the post, so providing it as a link.

Your thinking is right, but you need to ensure the metal part is near another piece of grounded metal. An easy way to do that is to put the pointy end of a Phillips head screwdriver into the end of the coil wire, then get the shank of the screwdriver near a piece of bare metal, say like the metal part of the spark plug. Crank the engine over and you should see a spark off of the screwdriver onto the spark plug. I believe you can also self trigger the coil by turning the ignition on, then by using a jumper off of where the red wire is attached, successively ground/unground the jumper. This will act as though the ignition is allowing the coil to load/unload, which should cause a spark.

You can also test it by doing the following:

Step 2: Pull the main ignition coil wire, the one that leads to the distributor, off the coil. Disconnect the small grounding wire, attached to the side of the coil, with a wrench.

Step 3: Turn on the multimeter and set it to the "ohms" function.

Step 4: Insert one of the multimeter's probes into the center opening of the coil, contacting the metal terminal inside the coil. Touch the second probe of the meter to the ignition coil's grounding terminal. The meter should read 6,000 to 15,000 ohms. If it does not, the coil's secondary winding is faulty.

Remove meter's probe from the center terminal and touch it to the terminal bolt on the opposite side of the coil from the probe touching the grounding terminal. The meter should read between approximately 0.4 and 2 ohms. If it does not, the coil's primary winding is faulty.

Tip: If the coil checks out test the main coil wire, that was removed from the distributor, for shorts. Set the multimeter to the "continuity" setting and insert one probe into each end of the wire. If the meter does not show any reading, or fluctuates, the wire needs to be replaced.

(Note: The above information was pulled from this website.)

Not the answer you're looking for? Browse other questions tagged ignition-coil boat or ask your own question.