Why would my car not roll freely in gear with the clutch in?

I have a Volkswagen Transporter T4 with an 02b gearbox. It's very similar to the normal water-cooled VW manual (e.g. 02a and 02j) gearboxes.

It has begun to be intermittently difficult to shift into gear. It does not make any strange noises, such as a bearing whine.

Engine running, when I put the car in neutral it will roll freely on a slight grade. Pressing the clutch and pushing it into gear (especially first) causes it to stop rolling as the synchro bites. To be extremely clear, this is all done while the engine is running, not stopped.

The input shaft must be significantly slowed somehow so that when the output synchro begins to press into the gear it acts like a brake. What reasons could cause this?

I experimented with it again tonight. Driving ~50 mph and shifting into 1st slowly (clutch depressed of course) does make it audibly whine once in gear. You can hear the input shaft spinning up as the synchro grabs before it finally goes into gear. Interestingly enough, it shifted smoother after this for a short while. Shifting into first, engine off, clutch depressed (and not released) during a slow roll also makes soft but expensive noises that sound like the drivetrain rocking against its mounts. I'm going to pull the transmission as soon as my schedule allows, but I suspect input shaft bearings.

The clutch is not fully releasing.

I am unfamiliar with the VW Transporter T4, and so cannot advise you further. If this is a hydraulic clutch, either the master or the slave cylinder could be failing. If the clutch is operated mechanically (by rod, or cable), check its adjustment — too little play in the system could result in the same not-quite-disengaged state.

Just sounds like your clutch needs to be adjusted, like it isn't disengaging fully when fully depressed leading to being locked up when in gear.

If its behaving differently when the engine is running it could just be because the engine torque is enough to overcome some amount of friction and causes the clutch to begin slipping. Once slipping I imagine it has a much easier time of keeping that going due to dynamic friction being different to the static friction.

I had several work related delays but removed the transmission and split the case. From there it was apparent that the third gear on the pinion shaft did not rotate freely. It was not locked to the shaft, but there was significant friction (I could not rotate it by hand).

The reason this manifested in the car slowing as soon as it was shifted into gear (despite the clutch pedal being pressed) is because it was effectively 90% of the way in third gear at all times. With the selector in neutral, the pinion shaft was driven through third gear. This spun the input shaft normally through its input third gear. Shifting into any other gear, however, did not remove this third-gear friction, but additionally locked another gear pair (e.g. second gear) to the pinion shaft. Since the pinion shaft cannot drive the input shaft at both the third and second gear ratios at the same time, one was forced to give. Third gear would then slip, second gear would work correctly, but the friction on the pinion shaft would work to slow the car.

A similar effect during normal gear shifting caused the input shaft to be driven at third gear speed as soon as the transmission passed through neutral. This made shifts extremely difficult, usually grinding no matter how slow and deliberate.

After pressing off the gears, I was surprised to find the needle bearing (29) and race in great shape. However, the spring clips (33) that hold the "dogs" (synchronizer ring indexing pins, 20 in the figure below) to the shift collar were both broken. I believe they were wedged between the third gear synchro and the 3/4 shift collar, preventing the gear from spinning. The synchro ring looked good. 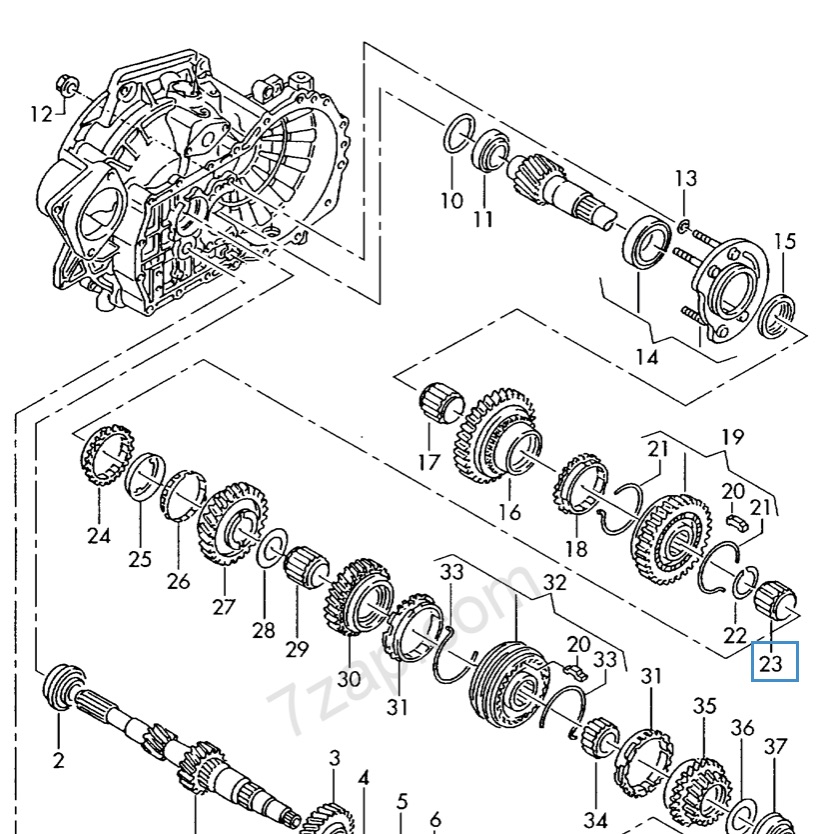 I replaced the spring clips, the third gear needle bearing (since I'd bought the part and it was a revised design), and pressed the shaft back together. All gears now work as expected.

10
Shift "Grinding" Issue?
6
Why is it that the front of the car lifts up when releasing the clutch?
4
Why after a certain RPM with the same gear selected the car no longer accelerates?
4
Car Would Not Start
5
Why couldn't I shift into 1st gear with car not stopped in my Renault, but my Volvo lets me do it?
2
Internal or external gearbox problem?
3
Why doesn't a car parked in first gear roll backwards?
3
After changing MTF, my truck grinds into every gear. Is this a symptom of a bad transmission? Or just a bad clutch?
0
Could gearbox be damaged by pushing gear lever too hard with broken clutch?