What's a safe way to remove wax from a plastic motorcycle fairing? I may have used an inappropriate cleaning product in the past, and UV may have made it worse. 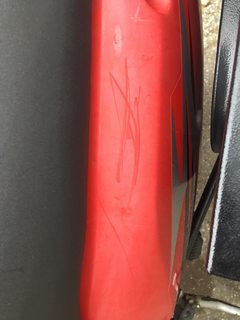 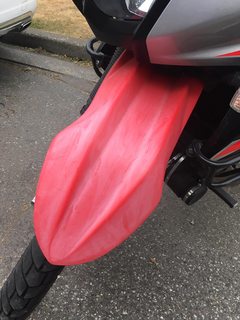 I can remove some of it with friction (photos show traces left by fingernails), but I'm just tossing it around for the most part. Dishsoap doesn't do anything. I'm thinking maybe a kitchen vinyl de-waxing cleaner might work.

Once clean, I might try some of the rejuvenation solutions mentioned below. They're not quite what I'm looking for however.

Here's the last cleaning product I've used (last year, before storage). There's no clear indication from the label that would discourage use on plastics. The wax is carnauba, a hard wax which comes from trees. 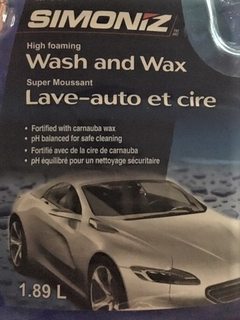 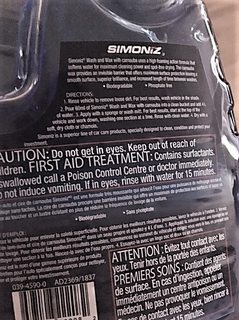 Simoniz high-foaming wash and wax, fortified with carnauba wax, pH balanced. Rinse vehicle to remove dirt. For best results wash vehicle in the shade. 60mL per 4L of water. Apply with Sponge. Rinse with water. Dry with cloth or chamois. No surface compatibility warnings. No phosphate.

I've tried a scotch brite, "VIM Linoleum and Vinyl kitchen floor cleaner" in hot water, and elbow grease, and I've managed to make some of it go, but It's a marginal improvement -- it looks slightly better, but that's because it's a sunny day and the photo is washed out a bit. 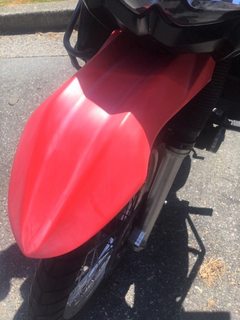 Hard to say for certain what will work without knowing what the substance actually is - washing up liquid is normally pretty good for stripping off most waxes, but as you say it's not done the trick here. You could stay on the same tack but up the firepower a bit by going with something like Meguiars Super Degreaser - I've used this to clean polishing pads before so it definitely can shift polishes and waxes.

You can try it at 10:1 dilution initially and if that doesn't do the trick you can take it up to 4:1.

If you do go down this route then you'll want to make sure you rinse the paint work off thoroughly afterwards and ideally apply an appropriate protective layer of a suitable sealant afterwards.

It's a bit annoying to purchase a gallon of stuff to just clean one fairing though (especially given it's not exactly cheap!). Although you can of course use it for when you want to clean engine parts etc in the future.

Alternatively a good tar remover is worth a try AutoGlym Intensive Tar Remover is very effective for taking tar (duh!), tree sap and glue residues off paintwork without damaging them - so it might work on whatever is on there. It's just hard to say without knowing exactly what it is!

If that doesn't shift it you could try using a claybar - you'll want to make sure the paintwork is free of any loose dirt before hand (a regular wash with any car shampoo that doesn't contain wax or even washing up liquid is fine) and then rub the panel with the claybar (taking care to keep it lubricated with quick detailer). I've never tried a claybar for this sort of job but can see how it might work.

Update to correspond with that in the OP

"Wash and Wax" is extremely unlikely to be the culprit here - unless there was something drastically wrong with either the fairing itself or the particular bottle of Wash and Wax. The Simoniz stuff isn't particularly great IMO, but it's not "mess up your paintwork" bad either. Just straight up middle of the road.

You might see a similar effect if you washed it with a fairly high concentration of wash and wax on a really hot sunny day when the panel was already hot - but I'd be surprised if the residue was as persistent as you describe from those factors alone.

I don't know enough about the VIM Linoleum and Vinyl kitchen floor cleaner to know what that will have done but the scotchbrite was ill advised to say the least. That's way, way, way too harsh to use on automotive paint. Sorry to say it but the chances are you've done more harm than good with that.

I appreciate that this may be a little too late in your case but for the sake of future readers:

NEVER USE A "SCOTCHBRITE" OR SIMILAR ON AUTOMOTIVE PAINTWORK

The course nature of these causes lots of fine scratches in the clear coat. Here's what one of my cars looked like after a previous owner had done just that: 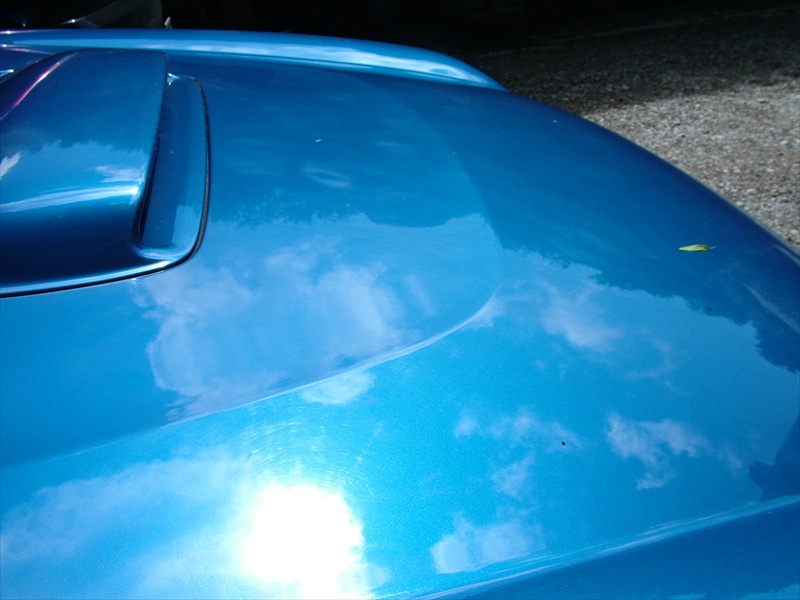 You see the little circular scratch marks? Yep, done with a scotchbrite-esque scouring pad. And that picture was taken after the car was cleaned, it had been throughly washed and clayed at point - that's the bare clearcoat you're seeing.

All the fine scratches the scourer makes light hitting the clear coat refract at lots of different angles giving a unpleasant cloudy effect to the affected section of paint.

That little disaster took ~2.5hours of grafting with a machine polisher to rescue.

I don't know whether it's going to be that bad in your case - I'd need to see some decent close-ups to know how bad it is. The layer of whatever-it-was may have helped protect the paint, or perhaps the lino cleaner offered some lubrication protection of it's own. Or perhaps it's f##ked.

If you've got a decent bright LED or fluorescent work light wait for it to get dark and hold the light above the panel and take a close up photo at an angle to the surface of the fairing - that should give an idea of what state the panel is in.

At the risk of sounding like a prank, I'm going to suggest something I've used many times to remove wax that was unintentionally applied to cast plastic parts on cars, which can suffer from similar staining from typical car wax (i.e. bumpers, door molding, plastic mirror trim, etc). I learned this from a pro detailer many years ago.

Try a dab of peanut butter on a clean cloth. Rub gently into the plastic then wash and rinse with a typical car wash soap to remove the peanut butter residue.

Not the answer you're looking for? Browse other questions tagged cleaning body-work plastic wax or ask your own question.