How to remove a stuck 2" hitch ball mount?

My US car has a standard 2" hitch receiver. The ball mount insert is stuck in the receiver. Its this type: 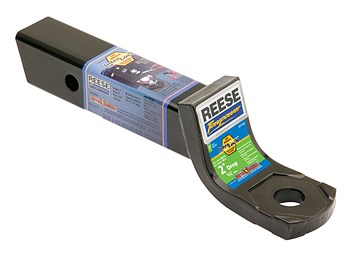 I can remove the pin easily. The mount wiggles around in the receiver (side to side) and can slide forward/backwards slightly (~1/8") with some force applied - such as tapping it with a block of wood.

But it will NOT slide out.

I simply can't generate enough direct force to tug it out; if I could get some leverage on it I suspect it could be forced out but there's not an obvious way to do that.

I'm guessing there is some grit in there which has trapped it like a wedge. It does have some light superficial rust but given the slight movement does not seem to be rusted in place.

I don't really mind if I had to destroy the inexpensive mount to get it out (grinder or whatever) but I don't want to damage the aftermarket receiver nor obviously the car itself. That said, I don't really see how I could cut it out without damaging other components.

Two methods I have used. Spray some lube around the hitch. Tie the hitch to a tree with some rope or chain. Slowly pull away, if it only come out half way spray some more lube, tap it back in and try again. Or you can go beastmode. Install an old ball upside down. Drive the car up onto some service ramps. Lay on the ground get a big hammer and swing away. With the ball on the bottom you should be able to bet a god swing and not hit the bumper. Clean everything with a wire brush and coat with some quality spray paint. When you reinstall it use plenty of grease so it will come out easier.

A safer and perhaps easier option is to use a slide hammer, mot garages or workshops have them and will probably let you use it for the price of a drink...

Put a small trailer on it with a bit of weight in (fixed at the front of the trailer), remove the locking pin and drive on some field (NOT on the road) and every 10 feet or so get out and look.

Or have someone watching closely, with binoculars for example...

Done it similar to this with tractor hitches... BE CAREFUL...

Not the answer you're looking for? Browse other questions tagged trailer-hitch or ask your own question.

1
Bumper Impact bar bolt resuse on trailer hitch - 2014 Audi Q7
1
How to approximate the maximum towing capacity of a School Bus
3
How many times can I re-use a screw-in hitch pin?
0
How to clean weld nut for trailer hitch install