I've got a 2 stroke 1 cylinder engine and its ignition system doesn't seem to work. I'm having problems with my magneto ignition system and I need help connecting everything up. I think I've connected everything right, but it still doesn't work. Am I missing another part like another coil? Should i replace it all or could you guide me how to fix it?

Edit (a little more info): It's an old soviet engine from a moped. I got it from my grandpa and i have never seen it work. I have tested the spark plug in a different engine, it works. I have tested for the spark (taking out the spark plug, touching the thread to the heatsink and trying to start it) it does not work. I have tried connecting a multimeter to the coil and i've gotten 1-3VAC. The carburator works flawlessly, the only problem i found was the spark.

Edit 2: I have tried to mostly rewire it all, I have replaced the capacitors to 2x 0.5uF capacitors wired in series. Tried to crank the engine and no dice, didn't produce a spark. The HV coil(the one that connects to the spark plug) when measuring to ground has a huge resistance of ~5mOhm while the other coil (LV i think, but not sure, the one that connects to the switch) has ~0.5Ohm. Are the coils wired up the wrong way or are they dead? (Sorry for a little sloppy soldering job in the new picture) 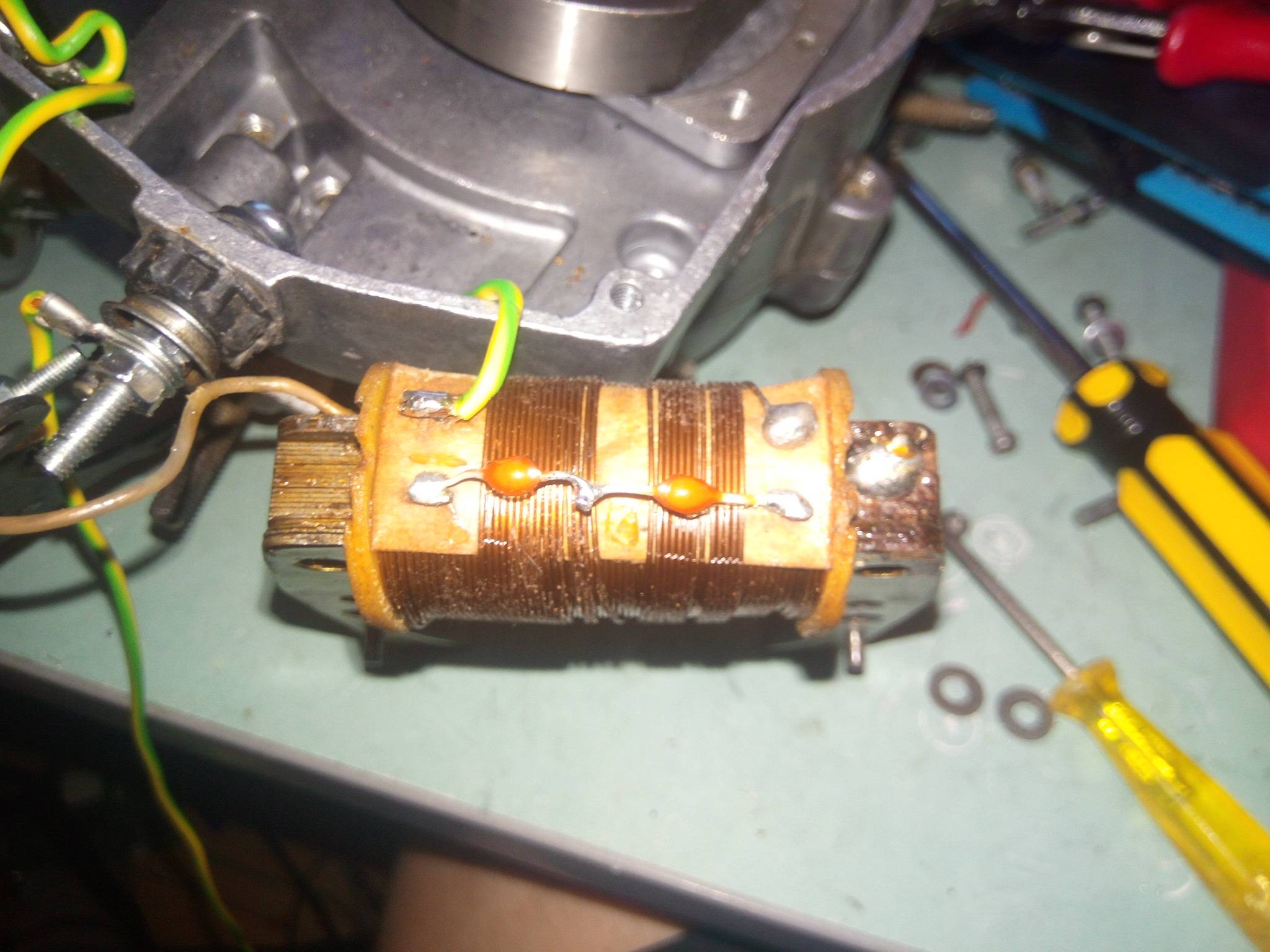 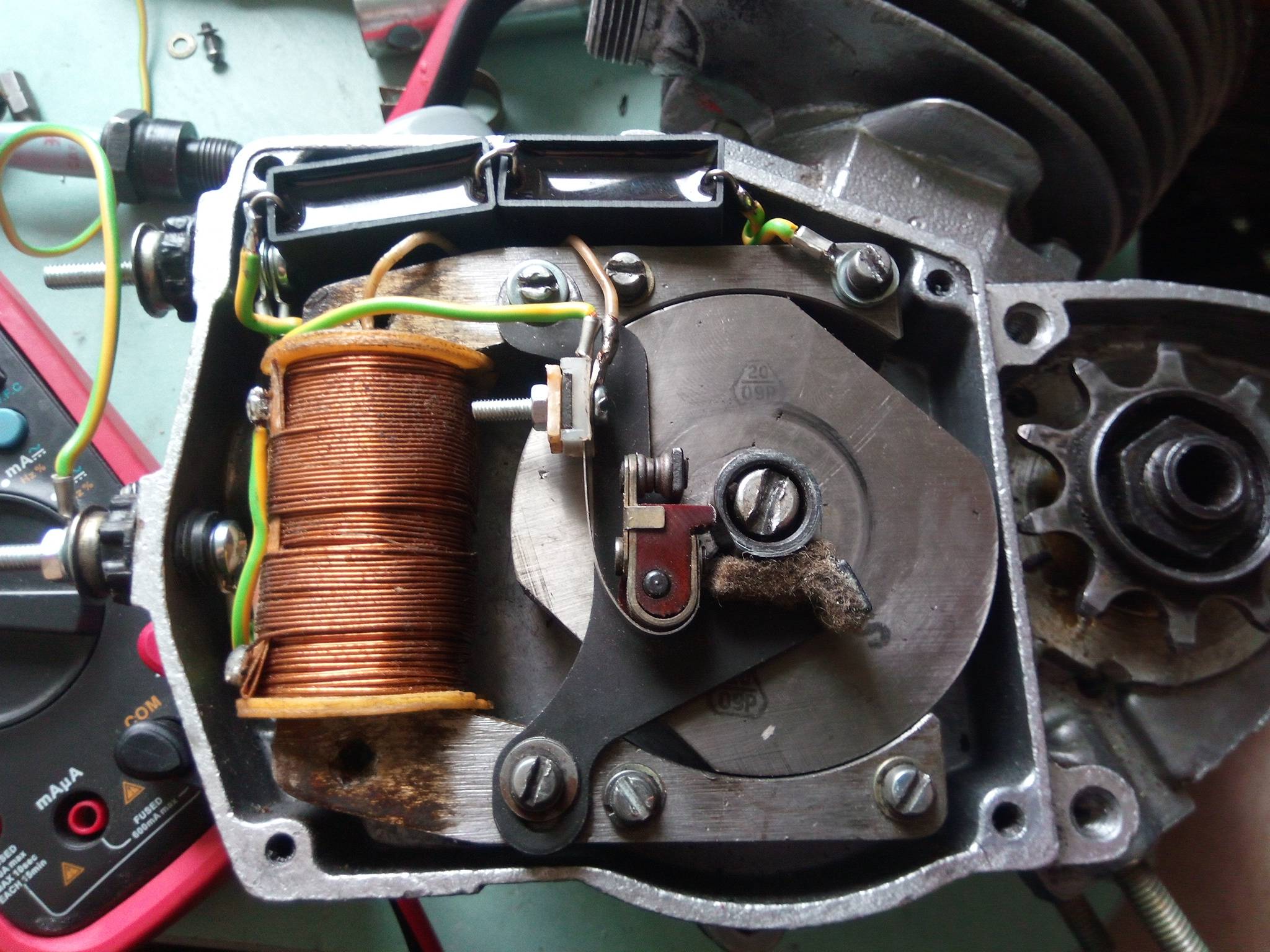 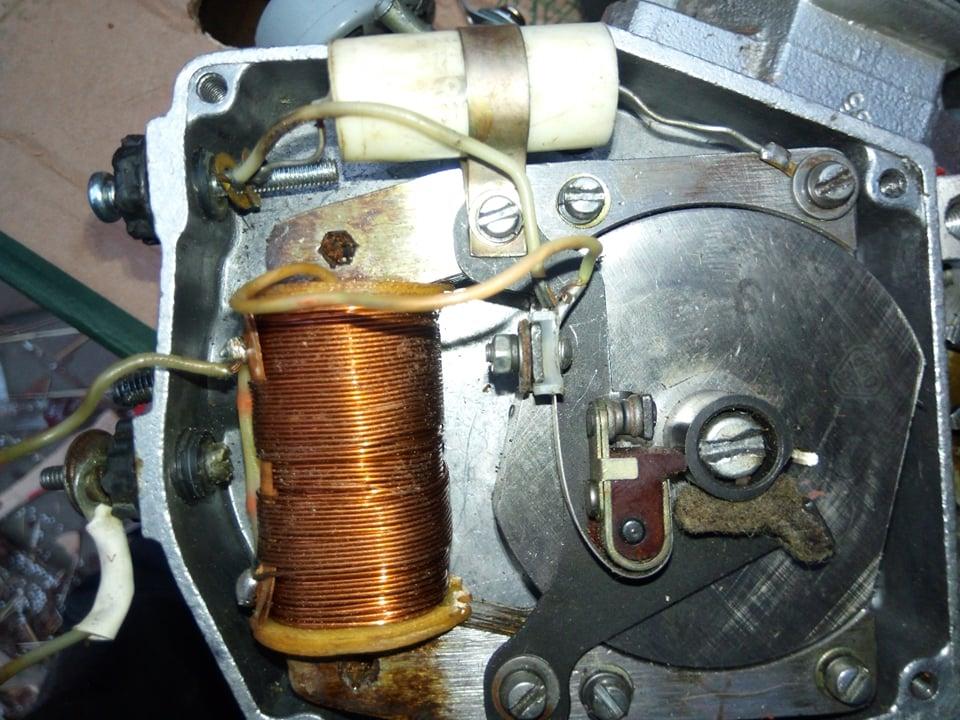 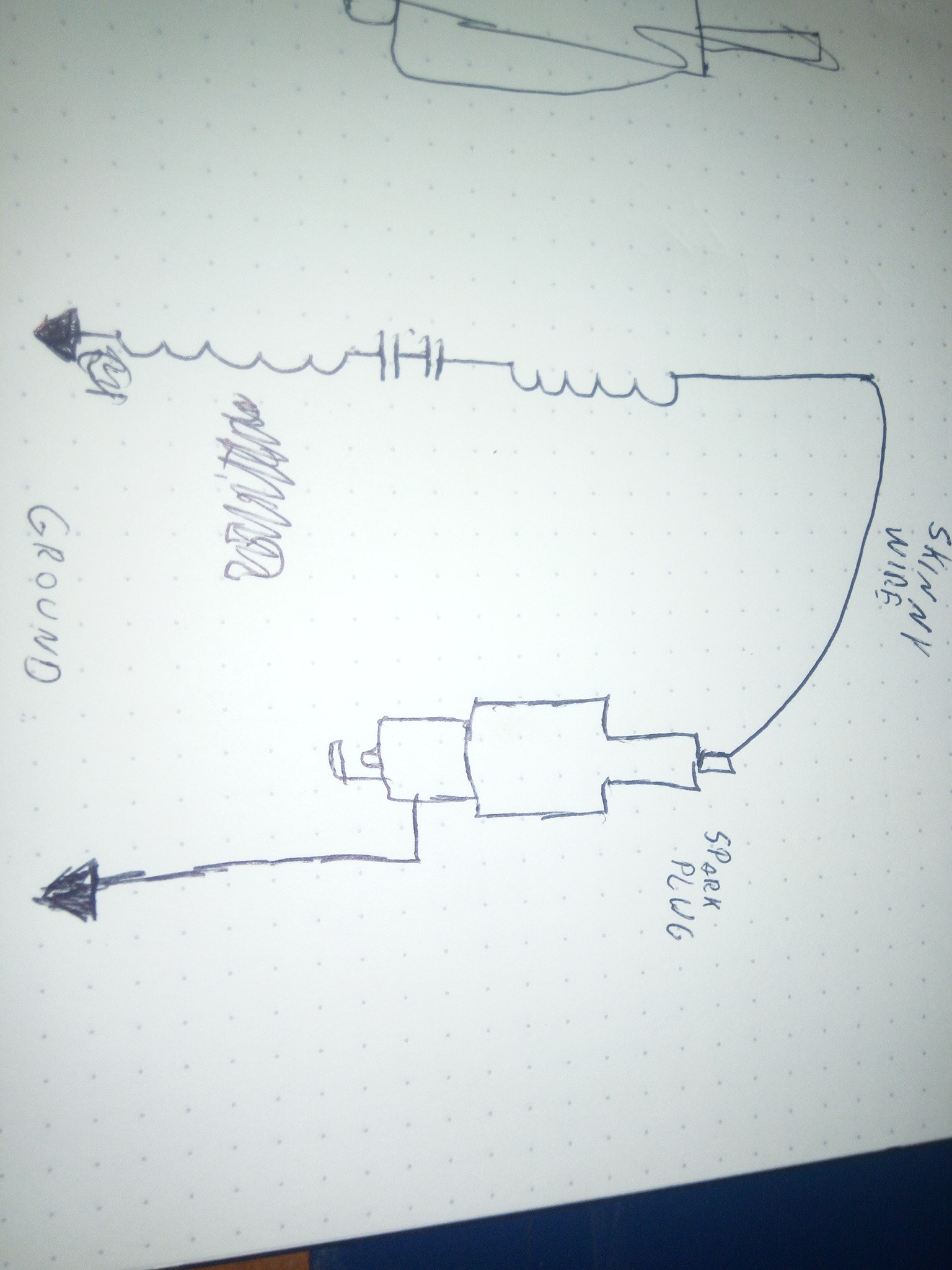 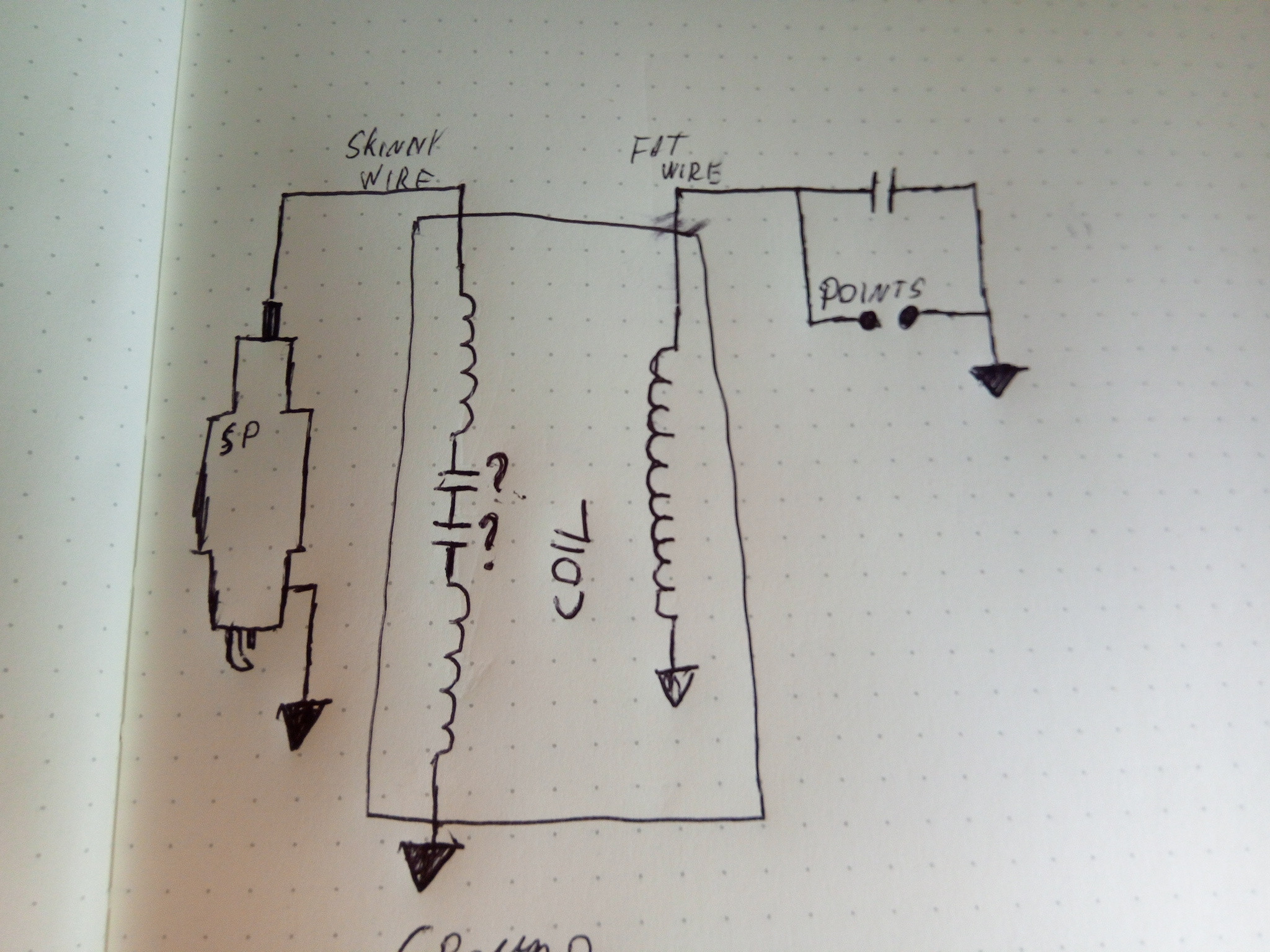 The main issue with the ignition was that i was missing another High Voltage coil, but before knowing that i had replaced the capacitor, bolts, sanded everything clean, so the connections would be good. As of now, the ignition works, but my timing is a little off and I'm having a few problems with my carburator so, it hasn't been started yet. (I still have problems starting it so that's why I took so long to write this answer) Some pictures to show the Ignition system as a whole: [ 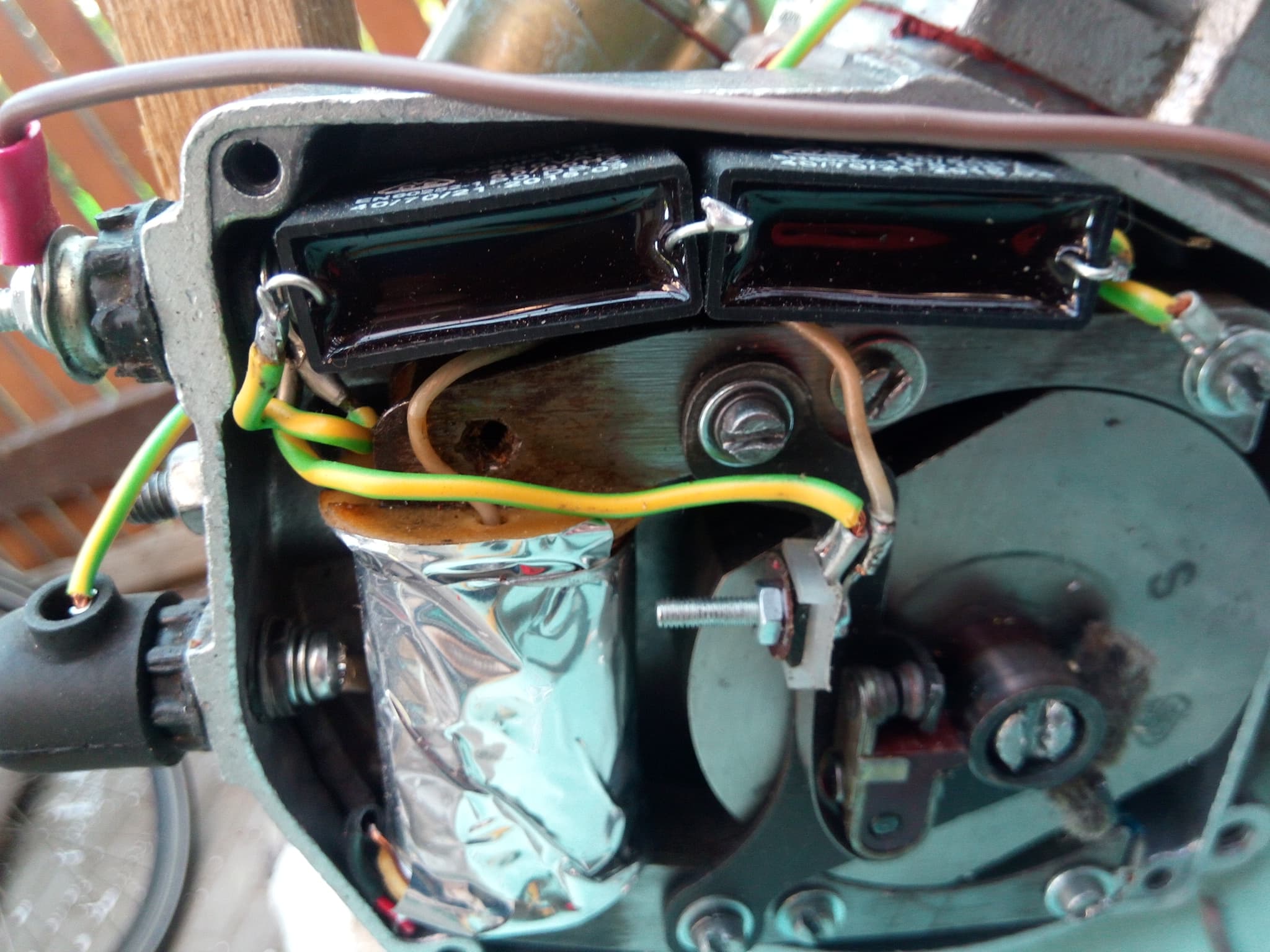 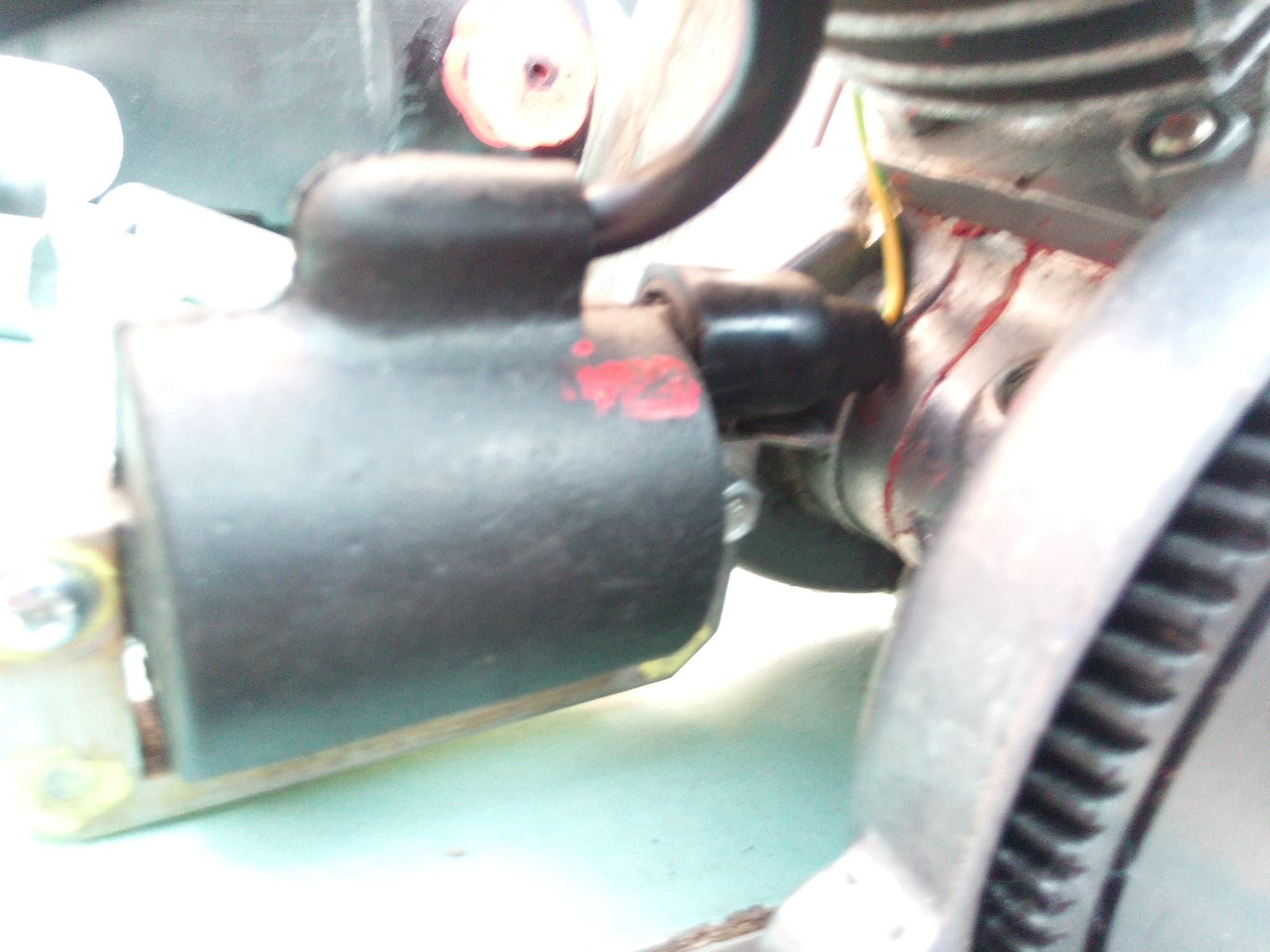 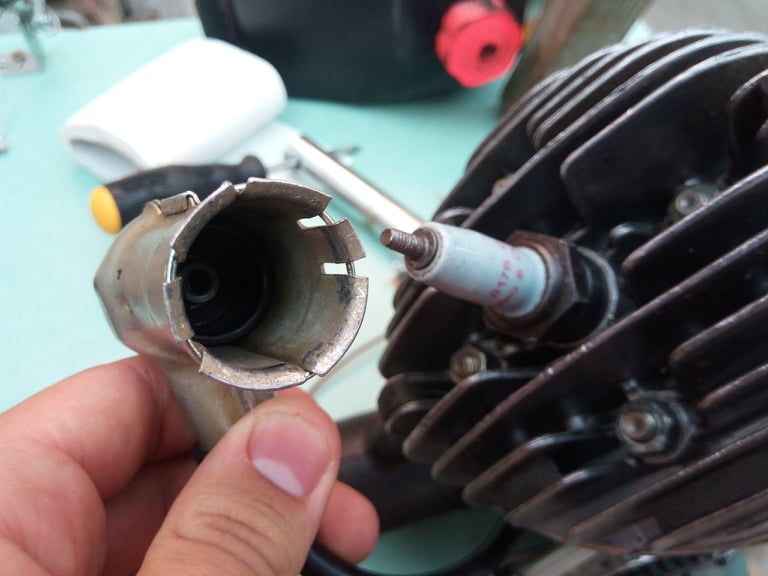 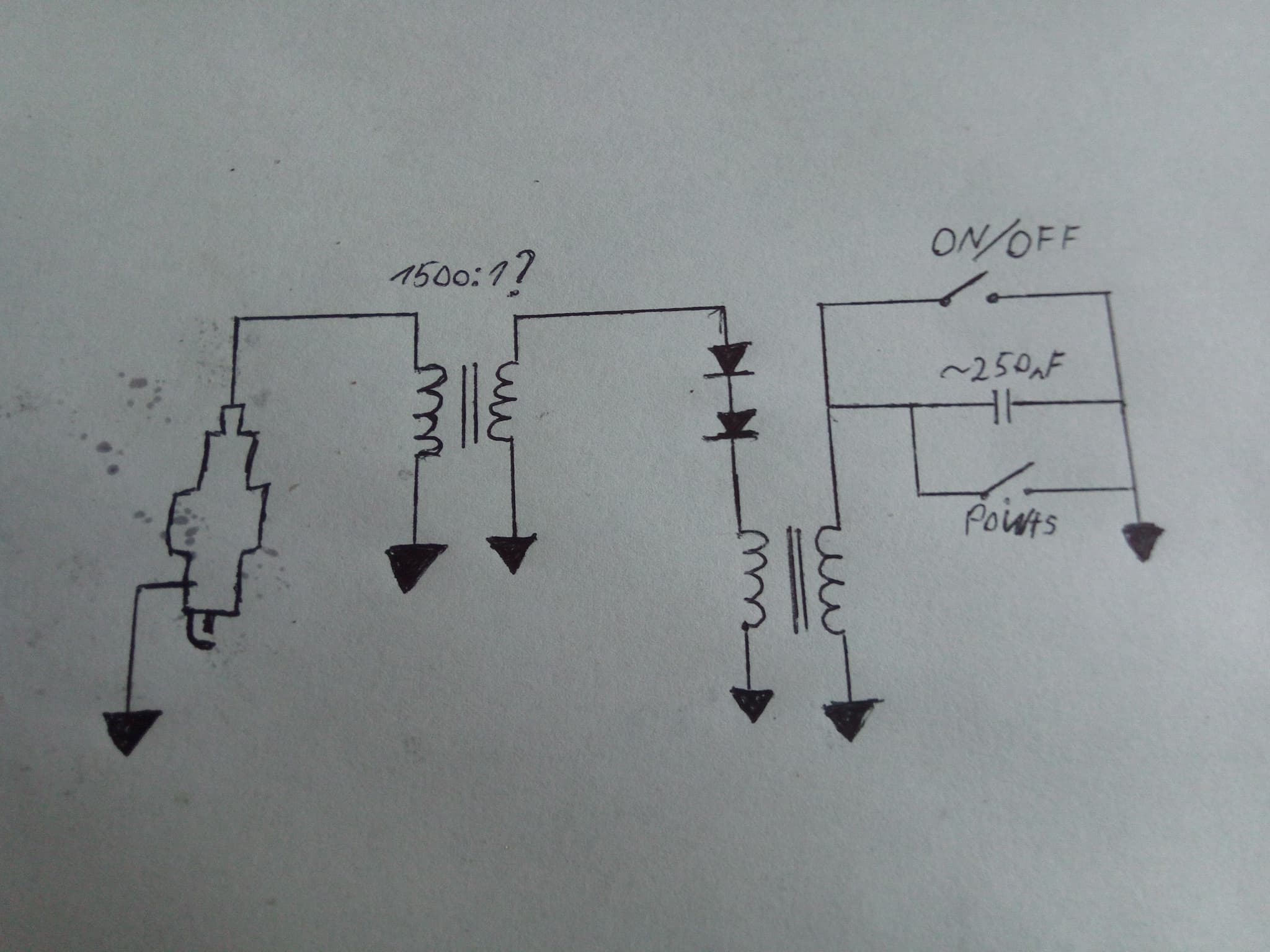 (More an extended comment than an answer, but whatever ...)

Energy transfer is found on most vintage offroad bikes, scooters and ATVs

All I can say is 'maybe'. I don't know anything about them; and, just looking at your picture, I don't see where the additional coil would fit. But, I'm coming from profound ignorance.

I wrote a giant answer just to realize that I was putting my foot in my mouth.

What you have there is a magneto points and breaker ignition. I can't tell where the sparkplug connects but if I had to guess it is to the wire from the coil to the left bottom stud in the picture. Please let me know if I'm wrong.

Your connections (with the above assumptions) are correct. The top left stud is then used to shut the moped off by grounding it. Leave it unconnected externally to run.

Make sure that the points are clean and not burned. Also check, double check and, triple check the capacitor. That is going to be the week link in the system. If the capacitor is bad it will keep the system from sparking. 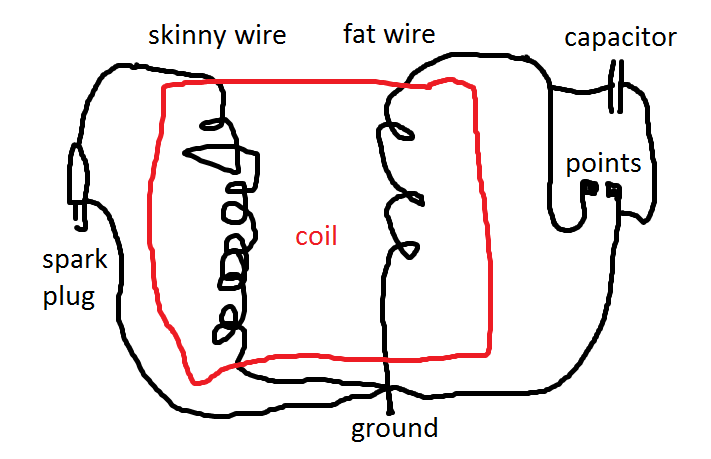 This is what I would expect the wiring to look like. Please note the "expect" part. This is what a typical points ignition would look like normally.

I have taken it out of the cage right now and i see the skinny wire coil connect in series to another skinny wire coil through 2 what it looks like capacitors and that coil has ~5kOhm resistance to ground. I will attach a photo to the question shortly

this was meant to be a comment, but i pressed answer by accident

(extended comment, really - elaborating/questioning my own last comment on your answer, WRT being 'an old auto ignition')

Not the answer you're looking for? Browse other questions tagged ignition small-engine ignition-coil two-stroke or ask your own question.