Why are high performance electric cars promoted as requiring no gearbox?

Why are high performance electric cars promoted as requiring no gearbox? Moreover, why don't they have gearboxes ("a gearbox" in this context implies a gearbox with multiple selectable gear ratios)?

Some reasoning and my own attempt an an answer:

The statement that "electric cars don't need a gearbox" appears to me as completely wrong, in the context of high performance.

If there should be any consistency to this logic, one might as well say that an electric car doesn't need more than 500 HP either. Why would anyone under normal driving circumstances require 500 HP?

Yet, an electric car such as the Tesla Model 3 or Tesla Model S, which do have around 500 HP, have no gearbox with multiple selectable gear ratios.

It is sometimes said that an electric motor has a "flat torque curve". The reality of this is more complex: https://electronics.stackexchange.com/questions/271674/tesla-car-maximum-torque-at-0-rpm-is-this-correct

However, instead of trying to study that I will just look at a real car's dyno graph.

The following is a dyno graph of a Tesla P100D: 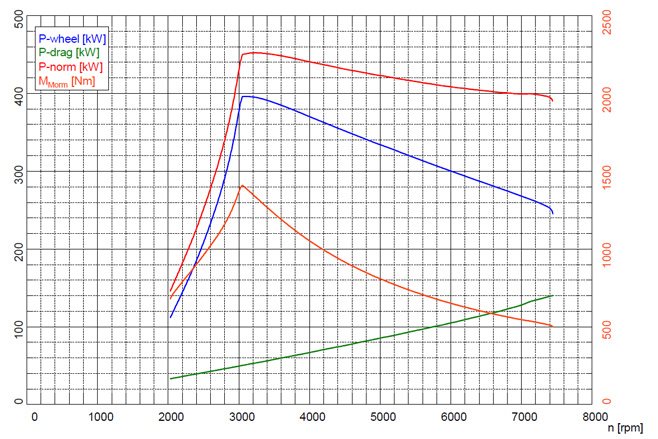 Observe the P-wheel (kW) plot, the actual power the car puts down on the dyno. It reaches a peak at around 3000 RPM, and then gradually it only gets worse.

This is the reality of an electric motor in an actual car. It doesn't have anything close to a "flat curve".

Yes, the total integral of the curve is very impressive compared to a single gear on a traditional car with an engine. However, it does go down, and the summed integrals of multiple gears could probably increase the total area.

As the RPMs increase and the car hits its top speed, the power has become greatly limited compared to the original peak power. At 7500 RPM it only has some 250 kW to offer. This perfectly well explains why all electric cars have a relatively modest top speed when compared to relatively very impressive acceleration figures.

E.g. take a Tesla Model 3 Performance, with its 473 HP (combined) output, with a 162 MPH top speed. Compare this to a 90s factory stock Toyota Supra's 320 HP and 180 MPH top speed. Now, obviously there is a lot more that goes into the top speed of a car, drag coefficient, frontal area, etc. However, this will be true for all electric cars, they all have a low top speed in regard to their respective power outputs.

Even the electric "Rimac C Two" with 1888 HP only achieves a theoretical 258 MPH, compared to the actual 285 MPH of the Agera RS's 1160 HP engine. The Rimac appears to have a two-speed gearbox, but the same question remains why it doesn't have more than two gears. To me it appears to require over 700 HP more to go 30 MPH slower than the Agera. Is the drag coefficient and frontal area that much better on the Agera?

Maybe there exists one or two exceptions? Please point them out. I'm not counting Formula E.

My guess for why a typical high performance electric car doesn't have a gearbox is due to the type of customers that buy electric cars. While a gearbox would give the car a significantly higher top speed, this isn't needed because most customers don't ever test their cars at 200 MPH, and perhaps don't care. However, many do find it exciting to test out fast acceleration at relatively low speeds. This is safer, and is more of a "party trick" that sells. Top speed only sells on paper, for most customers.

Moreover, the car would get more expensive, require more mechanical parts that will fail and require maintenance.

But again, if anyone can claim the car needs more than 500 HP, then with the same reasoning you could also claim it needs a gearbox to exploit that power properly. I don't see why respectable top speed figures aren't important if respectable acceleration figures are.

What am I missing here? Is my reasoning completely flawed?

I'll try to answer your second question to complement Solar Mike's answer. Generally speaking, your statements at the end of your question are what I agree with.

The reality of it is, most people don't care about top speed. Next to nobody ever casually speeds off at 200 mph (320 km/h) on public roads. This is particularly prominent in today's electric car market, because the biggest EV manufacturers right now are not German - the Autobahn is likely the only safe place to go that fast. Except, contrary to that, most German cars are electronically limited to 155 mph (250 km/h). In fact, not even on race tracks is it that useful - many road car based race cars are geared to top out roughly around 180 mph (300 km/h), because there are few straights that are long enough, and acceleration is more important.

The downside is as you said - for the 99.9% use case scenario, the transmission is not needed. It adds weight and complexity, and frictional losses as well. So the car would not only be more expensive to produce, it would be less efficient as well.

For conventional ICE cars though, it's completely different. Top speed for these cars is for the most part, just a consequence of the maximum output of the engine and the available gear ratios. Most modern cars have extremely tall overdrive gears to maximize highway efficiency - at the same time those overdrive gears can easily take the car up in excess of 180 mph (300 km/h), power permitting. For the highest performance vehicles, pushing that top speed even further can be as simple as changing the gear ratios, or adding an extra gear (there's definitely more to it, but this is the primary difference to EVs). Because of this, top speed is a very viable method to market your ICE vehicle; manufacturers are always bumping that figure up bit by bit.

At the end of the day, it always comes down to costs. Top speed doesn't sell as well as acceleration and power (which I personally agree with), transmissions would be expensive and ineffective, and EVs cannot compete with conventional cars in top speed because of that.

The key to answering your question is the term "High Performance Electric Cars".

Performance cars use a high output engine mated to a light-weight chassis which gives the best possible cornering and stopping performance. Colin Chapman (of Lotus) had a philosophy which was "Simplify, then add lightness". If a vehicle does not require a gearbox, do not fit one.

Adding a gearbox introduces the complexities of transmission loss. The difference between engine output and power available at the wheels is increased with more components between each.

Adding a gearbox bring unnecessary complexity, it's a whole heap of additional parts, many of which are moving parts. You complicate your servicing requirement and introduced more failure points.

Adding a gearbox limits the possible mounting location for vital components such as the engine or engines. The newest Honda NSX features no less then three electric motors. Would you introduce a gearbox for each?

You cannot lose sight of the fact that you are talking about a performance car. Look at the equipment levels on the likes of a Lotus Elise, a Caterham Se7en or a Ferrari F40. Every component has to justify it's existence. If it doesn't absolutely need to be there; don't fit it.

The highest performance electric car that I'm aware of is the Volkswagen ID R which not only won the Pikes Peak hillclimb but took 15 seconds out of the record. If a gearbox would have helped, they would have fitted it with one.

Simply because the electric motor can deliver its output over a wide range of revolutions per minute (rpm) and has high torque at zero or low rpm.

This means it can pull away from stationary and accelerate well.

An ICE (internal Combustion Engine - with pistons or piston equivalent ie wankel) has a limited working rpm range some 700 to 7000 or so in a car and higher for motorbike engines but the best power delivery is nowhere near constant over the range. You don't get full power at idle and above a certain rpm the power actually falls.

This is why cars and trucks have gearboxes, so that the working rev range is matched via the gears to the speed of the vehicle. Cars used to have only three gears plus reverse. Now cars have 5 or 6 speeds plus reverse and trucks can have 18 or more.

I have stuck to the basic idea of why a gearbox is or is not needed and ignored your incidental question about power.

Not the answer you're looking for? Browse other questions tagged transmission gasoline performance electric-vehicle or ask your own question.

3
How much efficiency is robbed from 'pumping loss,' if any?
6
Why do high-end electric cars have mechanical brakes?
9
What are Performance Camshafts?
5
Is anyone working on a battery-powered motorcycle (a real one, not a toy)?
9
Are garage outlets for electric cars evolving to 120V/240V/480V or to 30A/90A?
0
Why do most performance cars have longitudinal engines?
8
Can electric cars do *dynamic* (heat waste) braking?
2
Why do EVs with a single speed gearbox still require a gear box at all?
1
Which engine is technically compatible with a Toyota Yaris 63KW 1300cc manufactured in 2007?
4
Do electric cars corrode faster?