I bought a 50cc Yamaha Zuma off of craigslist, and it's had some aftermarket parts put on it (exhaust, 70cc big bore kit, new carb). I cleaned the carb and converted the throttle to a one cable set-up when I bought it.

I'm still having trouble getting it started reliably. Once and a while it won't start unless I remove the air filter (accessible through the same panel that covers the battery) and cover the air-intake with my hand. Then, I can slowly remove my hand while holding the starter and it will run fine.

I believe I'm effectively 'manually' choking the carb. The carb has two adjustment screws: 1) controls the minimum clearance of the slide (I believe this is the 'Idle Mixture Screw'), 2) controls the fuel/air mixture.

I have tried various combinations of these screws and find that letting screw #1 out almost all the way (so that the slide leaves around 1.5mm of clearance when resting), and keeping #2 about two turns from tight has the best results––even still, it still sometimes won't start without a 'manual choke'.

The air filter is a canister and is also aftermarket. My thoughts are that maybe the air filter is letting in too much air? Another thought is that the oil is too thick. Anyone have any better ideas?

scooter small-engine two-stroke
Share
Improve this question
asked May 4, 2019 at 1:09

It really sounds as if you have to choke the scooter manually. Does the carb have a choke? It looks like this: 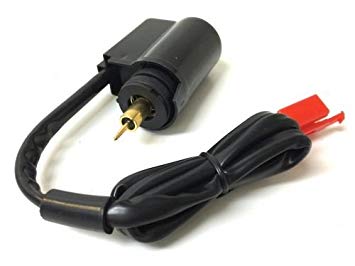 When the engine is running, electrical current heats some oily stuff inside the choke, which expands, and pushes out this brass part. And this closes a dedicated choke nozzle.

To test this choke, connect it to 12V and check if brass part moves out within several minutes. It's hard to see, better measure it.

(There are also manual chokes with a lever)

The screw controlling the clearance is there to set the idle RPM. The other screw is to adjust the fuel/air ratio at idle by controlling the air flow along a dedicated idle nozzle. It is said that two turns from tight is a good starting point for adjustment. To adjust the screws, increase idle RPM (via its screw) a little, then turn the ratio screw until RPM is highest. Then, put the screw in about a quarter or half turn again, and lower the idle RPM again.
But this is for a warm engine, only.

Zuma doesn't use a by starter I thought at least the two stroke I'll go look at the one out back. If it doesn't I bet you need a bigger idle jet

Not the answer you're looking for? Browse other questions tagged scooter small-engine two-stroke or ask your own question.