Disclaimer I know this is for a blower not an engine, but was not sure where exactly to pose the ?

I'm trying to assemble the fuel lines for the Ryobi BP42 two cycle blower, someone else took it apart so I did not see where all the lines ran before dis-assembly. But I found this image 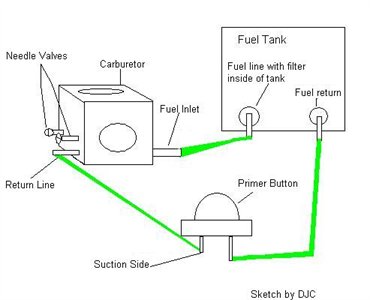 which my only question is....my carburetor is vertical where-as this one is horizontal....so that would mean that the fuel line would connect to the carburetor on the bottom (the curved insert on the carburetor). Is that correct?

Reason I am asking for clarification is that I did this set-up but when I was attaching the carburetor and the filter cover back to the blower itself the fuel line hose was just constantly dripping out the gas/oil mix from the carburetor. It was like the fluids were just running freely into the carburetor with no restrictions, so I wanted to verify my connections were accurate and if so, then ask where next to begin to troubleshoot this.

Browse other questions tagged engine carburetor small-engine fuel-line or ask your own question.