The upper radiator neck broke in half on our 2002 Honda CR-V (2.4 VTEC), which lead to some overheating. It was hot for about half a mile based on her story..

So this weekend I replaced the radiator and did a few other things while I had extra room to operate. Once I was all finished, I took it for a test drive, and shortly after I got on the interstate, I experienced poor performance and the car threw a P1259 error code.

Apparently this error code is often related to low and/or dirty oil. But our oil level is good and relatively clean (only a few hundred miles since the last oil/filter change). Car's total mileage is appx 170k.

Here's a complete list of work I performed in case something related jumps out for someone:

It drove great, initially, AC was killing it, and I was feeling good about my work. Then shortly after I pulled on to the interstate, it was like it didn't want to shift into overdrive, or maybe as if it was shifting in, then rapidly out of overdrive. Very herky-jerky.

An advance auto tech pulled the error code for me (P1259). An I was expecting it to point to a transmission issue, and I was hoping I had not refilled trans oil enough...after all I had to use it first to even check it. So I was surprised to learn it was related to the oil delivery system.

Doing some reading, I've found several people have replaced this VTEC solenoid valve assembly as a result of this error code, only to have the code return a week or so later. (Although it seems to have worked for this person.)

First, if I had installed that new in-line transmission filter backward (the old one didn't have a flow indicator), might that have created a false signal that could lead to this code? I have tried Googling that, but it seems these in-line trans filters were not factory, but a recall-based modification. There's actually nothing about the filter in the shop manual. I'm considering removing the filter for a week or so to see if the problem goes away

Next....was washing the engine a mistake? I've never suffered a consequence from doing that before, but apparently electrical shorts can lead to this error code.

Finally....how "tough" is this engine with respect to overheating scenarios? I'm wondering if the engine got hot enough that something is starting to break down and may be clogging the oil delivery system.

I apologize for the nebulous question, it just strikes me as VERY ODD that I would do so much work on a car, only to then get a trouble code related to a system I didn't manipulate. Thanks in advance for any help.

@Paulster2 and @Allen--It's not actually a coolant/overheating issue at this point, but an engine performance issue, more specifically a VTEC oil delivery issue. It initially overheated because the upper radiator fitting broke and sprayed coolant all over the engine, which was why I started working on it. But after I got it back together, I suddenly had the performance/VTEC issue. FWIW, my technique for refilling the coolant was to drive it up onto ramps to get the filler neck well above the block, gradually add 50/50 blue, and occasionally rev the engine to about 2500 RPMs for a minute or so, until it would no longer accept anymore coolant.

@Ben--So I ended up changing that VTC solenoid assembly today. Once it was removed, I thought I could perceive some evidence of moisture in the oil pressure sensor's electrical connection. I found a site that mentioned electrical shorts and even "moisture" can result in this issue. Rather than clean the screen, attempt to dry the part using a hair dryer, then do another test drive and risk ultimately missing more work (or more importantly, hockey tomorrow night), I opted to replace the whole assembly. And the symptoms seem to have disappeared, so far. ::knocks on wood:: Also, while I'm not sure what would qualify as a dirty or clogged screen on that part's gasket, mine looked pretty clean compared to some videos I saw on YouTube. So if you want to post your comment as an answer, I'll accept it.

With respect to the inline transmission filter, I found a thread on crvownersclub that includes a comment linking out to a good video that illustrates the flow direction for a 2010 CRV. While this video demonstrates transmission maintenance on a 3rd generation CRV, and ours is a 2nd generation CRV, that inline filter looks the same, and the flow direction graphics presented in the video correspond to everything else I've found so far. So I'm going to take this as confirmation that I got the flow direction correct in my filter replacement. (i.e. Hot ATF enters the radiator on the driver side, then cooled ATF exits on the passenger side and flows through the inline ATF filter on its return leg to the transmission.) 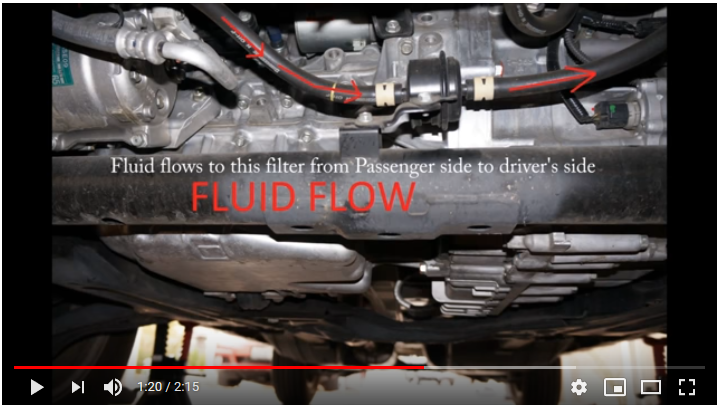 [Edit 4.12.2019: Problem has returned] So the car worked well for three days after replacing the VTC solenoid assembly, and today it resumed the performance issue after she was on the interstate for about 30-40 minutes. Since she's out of town and I'm at work, I had her take it directly to the Honda dealership in that city for diagnostics. Still waiting on a call from the service manager though, but I expect it is the same code P1259.

The 1259 code usually comes on because of a switch failure on the vtc solenoid assembly. You can check the screen in the gasket for blockage. Oil control valve failure on these is not as common and sets a different code IIRC. The inline trans filter wouldn’t set the code.

Check the connectors for water. If they look fine. Use a scantool and do a test drive, there are two pressure switches that need to be watched, ones normally off the other on below 4k rpm. Above 4k they switch states and the solenoids turn on. Then you should see a duty cycle to the oil control valve.

If you clear the code and it resets right away you would need to check for a circuit failure. Either the switch or solenoid on the VTC assembly is open or there is a wiring issue. If the code sets after it attempts to open the VTC solenoid, there could be an oil pressure issue or solenoid performance failure.

There is a screen on the VTC assembly gasket that needs to be checked, as well as on the oil control valve.

The video showing the direction of flow is correct for your transmission as well.

Your assumption about the direction of flow is correct.

Looking at this flush guide provided by Honda.

Step 5 states, "Attach the flusher discharge hose (B) to the return line of the ATF cooler using a clamp.

Step 6 states, "Connect the drain hose (C) to the inlet line on the ATF cooler using a clamp..."

On the subject of the filter being installed backwards. I've never cut one open so I couldn't say how they are designed. There may or may not be a check valve. It could restrict flow enough to cause issues.

Not the answer you're looking for? Browse other questions tagged automatic-transmission radiator vtec or ask your own question.

2
At what level does low oil prevent vtec from working?
2
oily sludge in coolant reservoir
4
Could too much transmission fluid cause problems?
3
Temperature gauge needle is on Hot, but engine is not overheating
2
2007 Honda Civic p0843 high error code. Replaced switch, no change. Won't shift into 4th
2
Changing or disabling vtec switchover RPM in 7th generation Honda Accord
3
Bolt SITTING in car after Head Gasket repair?? 2005 honda civic won't go above 4,000 rpm
1
2009 Subaru Legacy Poor acceleration with no DTC codes