After a hard gear shift, a big boom sound was heard and I was unable to accelerate without having the engaged gear to fall.

It turned out that screw linking the rear bottom silent bloc to the engine was broken (please see the following image taken from the internet, in blue is the engine, in green is the chassis mount point, and in red is the broken screw) 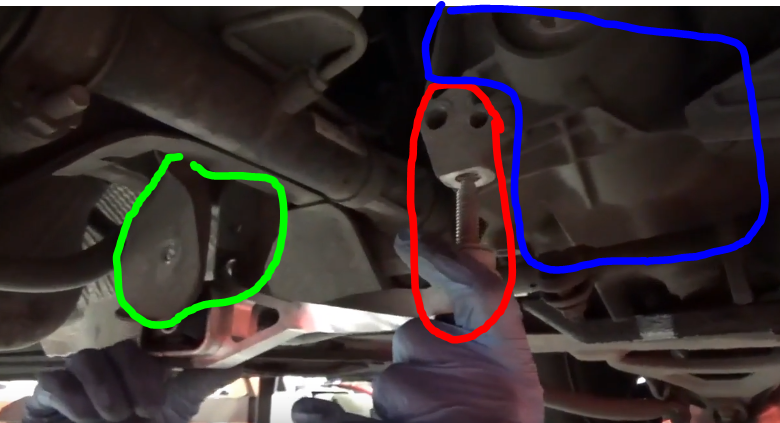 The screw is broken in half with one half still locked in the engine mount point.

The mount point in the engine (in red) is partially broken too.

Can this mount point (part of the engine) be changed by any mean without changing the whole engine?

How can the broken screw be removed from the remains of the mount point?

Please take a look at this video which show how to change the Silent Bloc. It is not the problem, but it shows where this part is exactly.

You could drill a small pilot hole into the broken off machine screw and then screw a screw extractor into it. If that doesn't work, you could drill the whole broken piece out and re-tap the thread in the hole. Alternatively, if there is a small piece sticking out, you could weld a nut onto the end and use that to turn the remains of the broken screw out.

If it were me, I'd be using lots of penetrating fluid and / or lots of heat.

Not the answer you're looking for? Browse other questions tagged engine transmission screw or ask your own question.