I've asked at least one question about my specific situation earlier, but at this point, I'm looking for information on how to operate in triage mode, my primary goal is to get my truck working well enough to run without issue for two weeks, because in two weeks my other car and my motorcycle will arrive, allowing me much more freedom to work on my truck, wait for parts or even take it to a proper mechanic, but until then it's literally the only way I have of getting to work.

The problem is that my truck (2000 Ford Ranger, V6 4.0) has lost a lot of power and so acceleration is slow, my maximum speed is around 55-65 miles per hour, and the gas consumption is high. Here are the codes it's throwing:

I'm guessing that most of these codes are caused by the same thing. I think that P1121, P0171 and P0174 are related to either a vacuum leak somewhere in the system or a bad ground. I've cleaned the throttle body and MAF to no avail. I put a hose in my ear and put it at various junctions along the air intake system, but there's always a fan running right there, making it very difficult for me to tell what's a leak and what's some airflow from that fan, but one thing I did notice is that I can hear some hissing at both ends of the large, ribbed hose that connects the throttle body to the mass air flow sensor (this is a picture I found and drew on, not one I took): 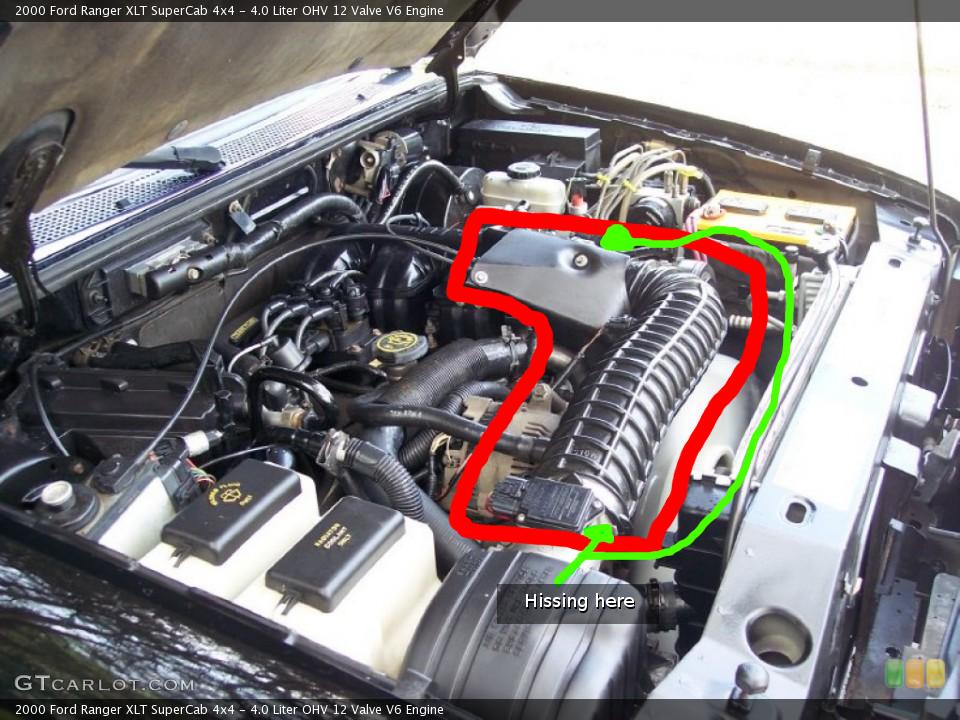 I have tightened those connections and shimmied them forward and back to no avail. So the question is - what are the things that can cause this and what stop-gap measures can I take to fix it? Because of the nature of the problem, I don't want to go down any blind alleys, so any diagnostic tests you can recommend would be appreciated. My current thought is that the O2 sensor is a red herring and that the problem is a leak somewhere.

Update: There was indeed a leak in that hose (intake tube?), which I diagnosed by blowing smoke from a cigar into what I believe is one of the vacuum lines: 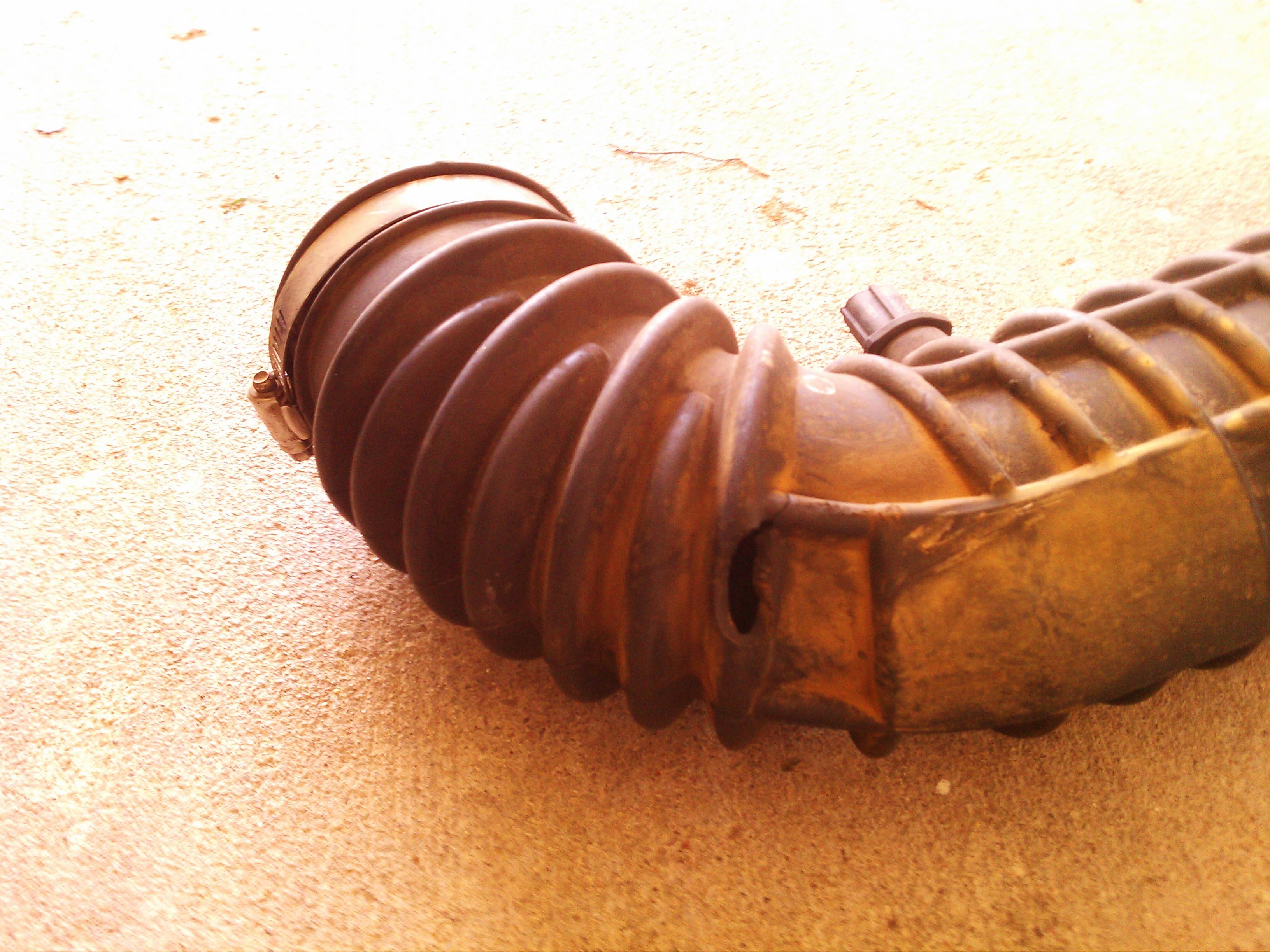 I made a quickie repair of the tube using tape and gum which seems to be holding just fine, but no power has returned, so evidently that's not the problem. Using the same cigar trick, I found smoke coming from some part I can't identify: 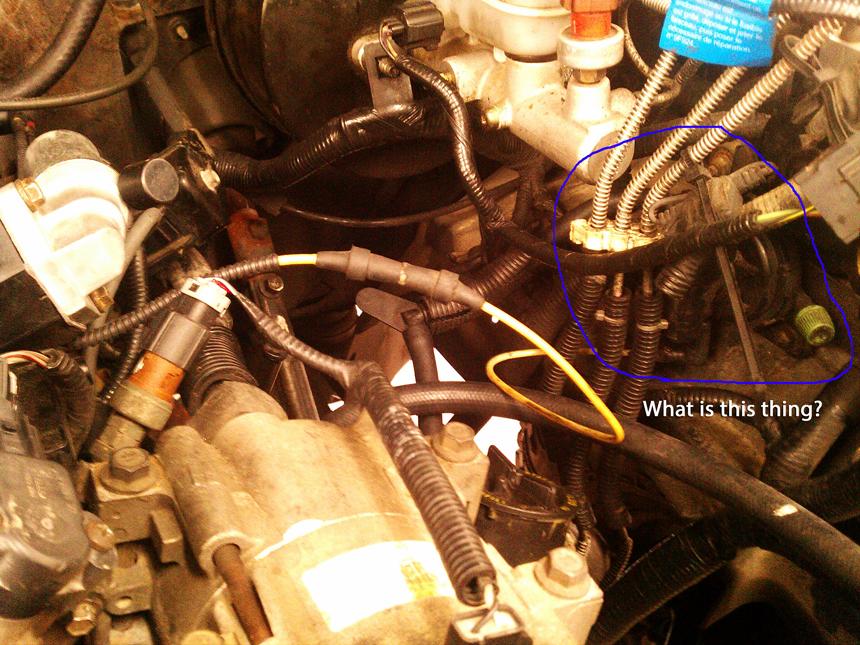 I'm hoping I'll be able to get this sorted soon. Here's another view of where the smoke actually comes out: 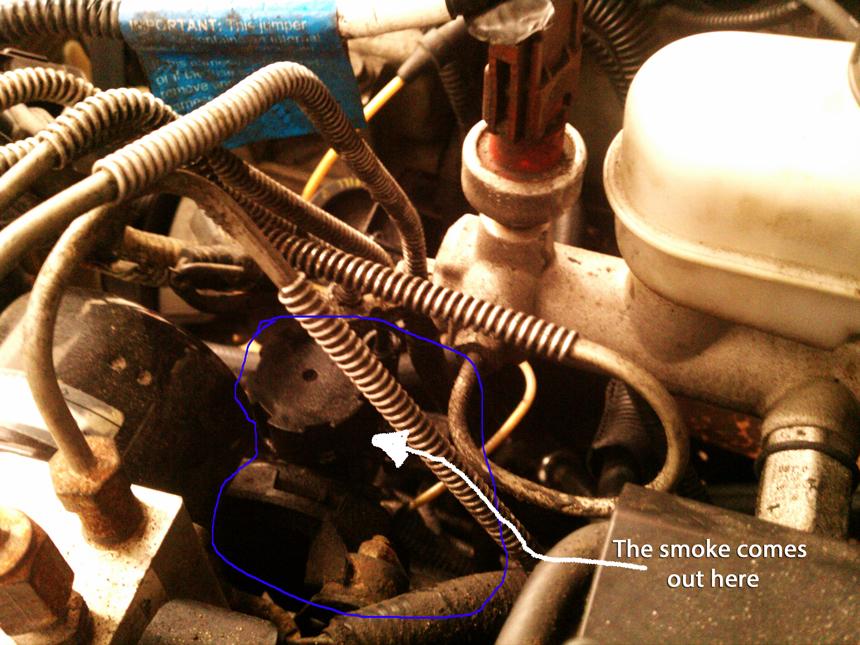 Update 2: Turns out that that it is actually the canister purge valve, which was indeed leaking (I unplugged the TPS and sprayed it with WD-40 and the idle noise changed, then swapped it with a new part and repeated and heard no change from spraying it). But for whatever reason that did not change the performance of the truck at all, so I'm still very much looking for any recommendations for possibilities for why I'm losing power, diagnostic tests I can run at home and how to just make this truck run for 1-2 weeks.

As a follow-on to that last update, 2 of the codes have now disappeared, I now only have:

So apparently fixing the one vacuum leak did solve one lean condition, but not both.

Update 3: I checked the voltage at the grey wire on the throttle position sensor,it smoothly varied from 0.6 V (closed throttle - idle position) to 0.5 V (wide open throttle) as a function of the throttle position. I pulled it off the truck and measured the resistance between I think pins 1 and 2 and it varied from 3 kOhms (closed) to 0 Ohms, smoothly. From what I saw in other posts people were saying it should vary from 1 V to 5 V, so that's suspicious, but I'm not convinced it's the problem.

Final Update: Ok, so the day before I was scheduled to drop the truck off at the mechanic, I was driving home and was going to help someone move something on the way home (figured an extra 5 or so miles wouldn't hurt if I was already driving 40), but when I got to Sears (thank goodness I did this!), I got out of the truck and smelled radiator fluid burning - a smell I wish I were less familiar with. I was hoping it was someone else, but when I looked under the car it looked like my truck was ready to give birth. I went and got a new bottle of radiator fluid and took a look under the hood to discover that the coolant fan was now MISSING, with the fan clutch all scored up (presumably from the fan wobbling to and fro). I filled up the reservoir and drove the last few miles home (stopping only at Wal-mart to get more radiator fluid and some stop-leak, which I did not put in the radiator just yet) with the heat blasting. It was only sometimes hot, which really bothered me as I think it means the pump wasn't giving good circulation.

I make it home with minimal fluid loss and in the morning I make it OK to the mechanic, tell them all the problems and they look at me like I'm one of the patients on House - luckily they're actually very great mechanics and highly reviewed/recommended. They end up having to replace not only the fan but the radiator and the water pump - all leaking water profusely (as an aside, it's clear that this was not an upsell, as the guy was practically trying to convince me that this was work I could do myself rather than pay him to do it). Anyway, once that was all replaced, the power problems all mysteriously disappeared. The mechanic couldn't explain it, and I can't explain it. I haven't had time to pull the codes again, but the truck runs fine, so potentially this was some secondary effect of something in the cooling system. I would have never guessed that.

Also, I could never find even an OEM version of that intake hose running from the throttle body to the MAFS, so I ended up putting a bit of hose patch tape over the hole and covering the whole thing with quick-setting JB-weld and I've had zero problems since. Seems like it may work as a permanent fix (at least until I'm at a salvage yard one day and see the right part just sitting there).

Hopefully something I've done along the way will help someone later.

When discussing the Throttle Position Sensor

Conditions when the sensor fails this is what happeneds electronically.

If the systems can't "plant its feet" due to the fact that it cannot confirm throttle positionAp, and since throttle position is a very important factor this is where you will see faults in a variety of places. Not being able to see the throttle will make it impossible to set proper mixture, and seeing that the MAF & TPS are obviously not seeing "eye to eye" there's no way to confirm air volume. And with all that there's not a chance the exhaust reading will be correct.

According to your last update .1v is what you're movement is. Something is wrong here. The sensor is either installde incorrectly or it's junk. Seeing that it's rest position [idle] is in fact .5v then I'm going to saw it's not installed correctly.

The part you're pointing to is this one. 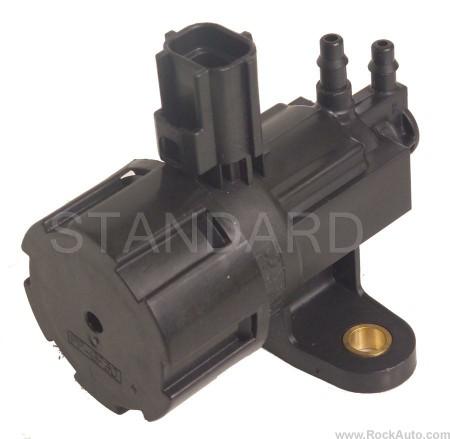 Not the answer you're looking for? Browse other questions tagged ford fuel-system maf or ask your own question.