Latest update (5th March): Okay, so a friend and his mechanic friend with full diagnostic on his computer was able to take a look at the info from diagnostics, and also took a physical inspection on the engine. Physical inspection, immediately could say the turbo was done. Tonnes of play on the blades at compressor side (I've now felt a working turbo and realise it really should be solid!). It was also apparent the engine seemed to be starting on fewer than the full 4 cylinders. Diags revealed two injectors required (forgot the cylinder numbers for now).. Sourced a used turbo from local peugeot scrappers (engine is PSA, same as 1.4 HDi) for £60. Waiting to obtain some used injectors and find out whether it is imperative to replace the oil feed, uptake, return, and sump.. Once the work is done, I'll post a final answer on this in case it is of use to anybody else!

update (1st march 2019): Replaced the EGR valve... original problem still persists just the same although the EGR was very dirty (soot/dried oil?) inside, the gasket was covered in wet oil. Of the two screws that hold the EGR in place, the higher one was clean and dry, the lower one was covered in oil..

Update on below: This problem is coming up with P0404 EGR fault code. I could replace the EGR (can get one for £100 while Eurocarparts have offer).. But I've read around and some word of this possibly being more fundamentally caused by turbo issues, perhaps intake leak. There is oil on hoses near the turbo intake....

Completely out the blue, I got on the motorway on Sunday and realised the power wasn't right, then after getting up to 50/60 on flat/downhill... on an uphill stretch the power was lacking such that I began slowing.. Fifth gear with foot to floor would usually give increasing power here, but it was struggling, and dropping a gear barely helped. Now, the car starts okay, idles smoothly, and on flat pulls away sluggish but steadily for urban use. Any slight uphill and pulling away is a struggle to reach 25/30mph in reasonable time. When I'm putting acc pedal down fully, often getting a lot of fine white smoke from exhaust.

Parked in neutral, putting the acc pedal to the floor has been topping out at 2.5k-3k rpm, again with smoke and a not so nice noise.

I'm struggling to tell if I'm getting turbo spooling or not... the noise is distracting from what I'm used to hearing anyway.

The air filter was really neglected so replaced that, but obviously that alone wasn't it. A few months back I replaced the fuel filter. I know I was a bit lazy in bleeding it and mostly spent ages priming it from empty using the primer bulb. A rough first start, and a couple of misses in the first drive after, but since then it has been fine. I can't see why any issue with that would suddenly become so catastrophic 3 months later, overnight pretty much.

Haven't been to the EGR yet... took the MAF sensor off, cleaned it with carb cleaner before realising that is a bit risky perhaps... but after letting it dry and reattaching, no difference at all to the drive. Driving it down the street with the MAF sensor unplugged gives no apparent difference to the drive, although unplugging it with engine running gave a very very subtle change in engine noise. Could that mean its gone, hence unplugging it makes no difference? (Alas, and blasting it with 30% hydrocarbon cleaner didn't either).

I took off the turbo IC air intake (between MAF and turbo) hose too... its a bit oily inside, and that smaller side hose leading off towards air filter area - some video called it an oil evaporator - well, that was oily, inside and out, and the connection it plugs into near the air filter was clogged with very solid oily gunge.

I'm not used to turbos, but would the MAF/air intake side be the condenser end? Either way, this is what it looked like inside... Obviously a bit oily, but I can't tell if the shape of the fins is morphed or totally fine. 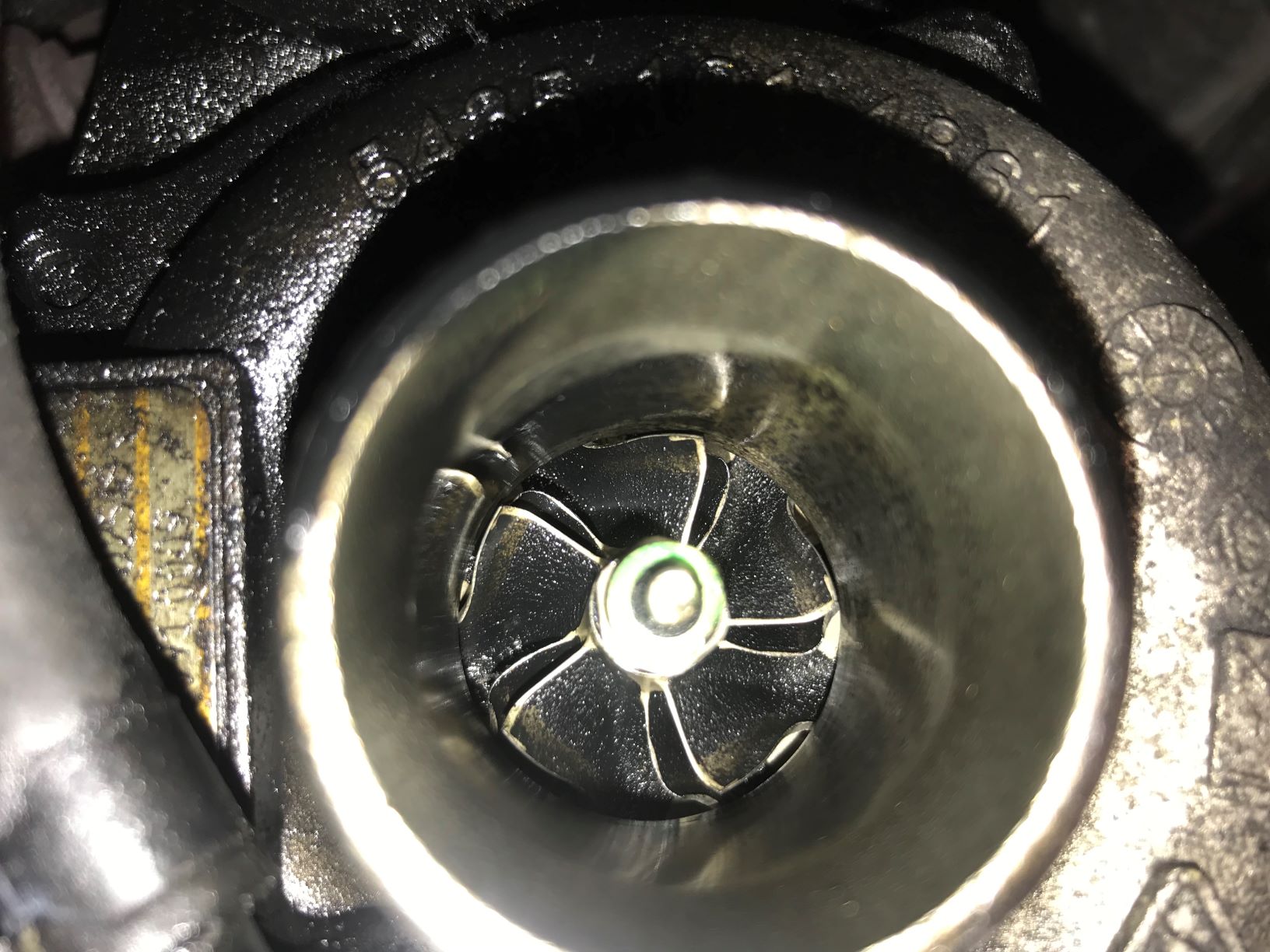 The MAF or EGR I can do myself, but even with a sale at eurocarparts either one will still be a hundred quid in parts.. turbo, I can find a used turbo and I suppose I could replace it myself - although I know really doing so I should also replace a tonne of other parts.

Finally, the car has always had a very slow oil leak... with a lot of oil near the turbo and that intake pipe. I'd seen other posts about this, suggesting perhaps spraying from the turbo... or perhaps some seep from that super oily hose leading off from the elbow in the turbo air intake hose...

I'll update if I can get any error codes that give insight, or if I find a solution! But appreciate any pointers as I've done next to no work on this car, on any turbo diesels before, and experience is a bit limited anyway!

I have the same problem with my fiesta, try to clean out your egr and get a cheap used replacmemt and only change the electrical side that should get rid of the error. When it comes to the noise I found if you move the breather box the pipe that goes behind the engine if its loose it will make the engine sound a lot deeper so be sure to check that. When it comes to the turbo i was thinking it might be the wastegate or the hot side might ve clogged up? Worth while yaking it out and having a look thats hoing to be my next step trouble shooting this problem but you'd should be aware that it might be the injector after all

Not the answer you're looking for? Browse other questions tagged ford smoke fusion power-loss tdci or ask your own question.