Why does a backup camera work without the ground wire connected and is it needed?

I am in the process of installing a backup camera that has the same wiring as shown in this picture: 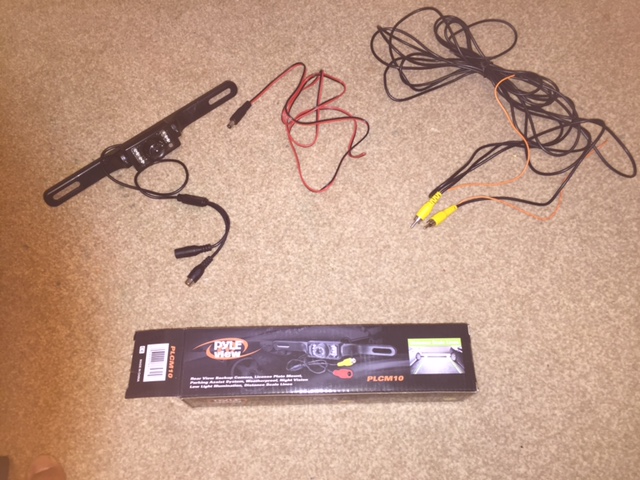 The cable in the middle with a red and black wire coming off of it connects to one of the two cables coming from the camera on the left. The instructions state to connect the red wire to the reverse light's positive (+) wire and connect the black wire to ground.

The cable on the right has a RCA cable along with a single wire that appears orange in this photo. This is run from the rear of the car to the front of the car. The RCA cable plugs into the backup camera input on the rear of the stereo to transmit the video from the camera. The orange wire is to trigger the car stereo to display the backup camera image when the car is in reverse. The orange wire in the trunk connects to the reverse light's positive (+) wire (same as the red wire above) and in the front of the car it connects to the backup camera trigger wire on the stereo's wiring harness.

While I was in the process of hooking this up I completed the following:

I have two questions:

For reference the actual model I am installing is a eRapta ERT3 Backup Camera, but as stated the wiring is the same as the picture above.

The camera was, most likely well most certainly, grounded via the rca cable with the other camera earth or ground.

Don’t rely on this as it will increase “noise” or “interference”, ie the shielding on the rca cable works when both ends ie cameras are earthed or grounded.

Not the answer you're looking for? Browse other questions tagged electrical ground backup-camera or ask your own question.

1
Should I use 4, 2, or 0 gauge wires for powering an amplifier from the car battery?
0
connecting backup camera in my honda 2001
11
Is it okay to splice a backup camera into the reverse lights?
2
Correct Relay Splicing Methodology (Backup Camera & Reverse Wire)?
4
Suzuki Grand Vitara 2004 wiring
3
Stereo buzzing noise when lights not on; recently installed reversing camera
3
Nissan Versa 2014 reverse light wire
3
Do I need to connect a car stereo to a 12v ignition source if the OEM car stereo wasn't connected to one?