How to add hybrid technology to a 4-stroke engine motorcycle?

I am enthusiast of automobile, and especially of motorcycles. I don’t know much about engines practically, but I read a lot. I was reading an article at How Stuff Works about the hybrid technology being used in cars that are capable of getting outstanding mileage. It states that car will use battery power for drive in range of 50 to 60 km/h but once pushed above the said limit it will use gasoline. It’s a cool idea.

I am wondering if I could somehow be able to achieve this with my motorcycle (it’s a Suzuki GS 150).

Converting existing vehicle to a hybrid is a difficult proposition, and even more so with motorcycle due to limited space allowance.

In a small motorcycle like that one would have to go with the wheel hub motor like that: 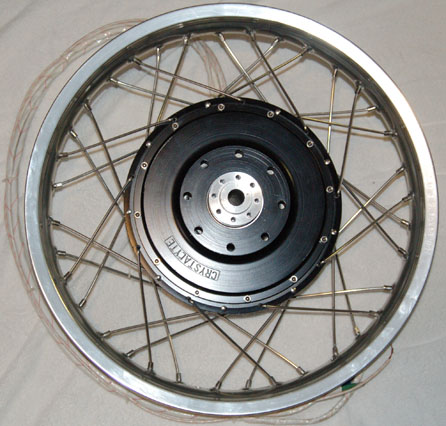 Those could be fairly expensive, plus there is an additional cost of re-spoking the rim with this hub, and converting to a disc brake (since yours are drum brakes).

More-over, this being a hybrid design, there is considerable engineering challenge of coupling and de-coupling this motor from the rest of drive-train or the motor. Possibly, there could be a clutch that disengages the hub from the rear sprocket, but then it would compromise the rigidity of the unit, as the sprocket must be securely attached to the hub to transfer power, and I am not well versed in mechanical engineering to know whether there are clutches available that would accomplish that. Again, that would also add bulk, and unsprung weight to the rear wheel.

Alternately, the same hub could be put onto a front wheel, and then to operate such hybrid system, one would have to manually put the gearbox in neutral before operating the electric motor. The latter requirement is a given, as the automatic switching between two modes would be prohibitively complex and expensive on such a small machine.

Manual switching, however, gives flexibility of using the electric mode in different ways: either slow-speed parking-lot cruising, or using the electric motor to maintain higher speed while the petrol engine gets the bike up to that speed (similar to the Porsche hybrid system). Either way, I would stuck with petrol propulsion for hard acceleration or heavy loads.

Given the limitations of space and weight, one would have to go with high energy density battery such as Lithium-ion, but that again would add cost. Theoretically, one could add couple automotive batteries to the rack around the rear wheel, but those are heavy and would significantly cut into the useful load of the vehicle.

Then there are electronic controllers and regulators to run this system. If we settle on the manual switching between the modes of propulsion, it significantly simplifies the electronics, mechanics and controls of the system, but it still requires additional electronic equipment and wiring that needs to be placed somewhere. As an example solution to this problem, new batteries could take over the duties from the small on-board battery, which can be taken out, and its space could be used for the controllers and regulators.

While this would be curious engineering exercise (and, possibly, good university thesis for some electrical engineering graduates), it is, in my under-informed opinion, a futile one. It is too complex, and too expensive to justify such conversion. You already have good, reliable machine that is low on the fuel consumption and decent with emissions even as it is a carburetted one. I have similar bike (Suzuki TU250X/ST250E/Volty), which has the same motor with larger cylinder, and EFI, and it gets 2.7‒2.8 l/100 km in fuel consumption when ridden conservatively, and it is a lot better than the car as personal mode of transportation.

If you are interested in electric transportation, you would be better served by converting a bicycle to electric, or buying old broken-down small motorcycle and converting it into fully-electric commuter. There are plenty information about such conversions, and it is a lot cheaper than trying to put together a hybrid.

I'm not qualified to do a mod like this, but if I were going to spend the time learning how to do it, here's what I would aim to do. Of course plans might change as I learned more.

This way you avoid the issue of having to switch between electrical drive and mechanical drive; when the engine is running, it's providing electricity for the electrical drive, and you can turn it off (preferably automatically) when the battery charge is sufficient that you won't need it for a while.

My name is John Gustafson. I agree with using a hub motor. Here is the answer I came up with. It can be found on my webblog.

In this I show the process of building a hybrid motorcycle. I hope that by watching the mistakes I've made, you can avoid the cost, delays and headaches and get straight to building the best bike ever.

My advice: Start with the lightest motorcycle you can. Weight is EVERYTHING!

If you have questions, contact me via my blog. I'll be happy to share what I've done.

This is a difficult task and not for the faint of heart.

Not the answer you're looking for? Browse other questions tagged motorcycle or ask your own question.

3
How can I add tension to a motorcycle chain?
1
50cc Two Stroke Scooter/Motorcycle - Idle and start issues
2
Motorcycle: increasing choke kills engine
3
How do I fix my XF125GY 4-stroke engine misfires?
2
What kind of technology is used to create this “The Self Balancing Electric Motorcycle”?
3
How to learn motorcycle maintenance theory
6
How to refurbish an old motorcycle?
2
Motorcycle Engine Test Without Oil
1
Milky Motorcycle Engine Oil
0
Motorcycle engine oil decreasing periodically